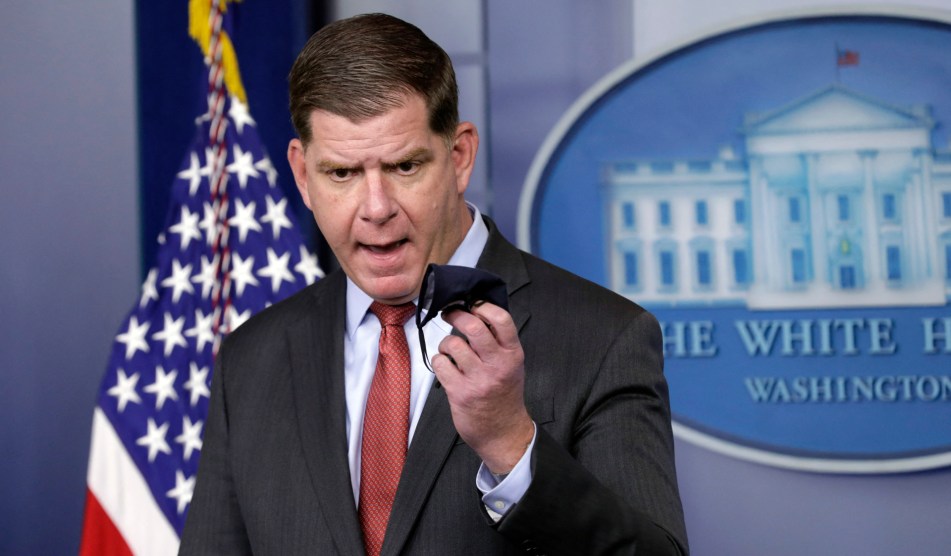 In an exclusive interview with Reuters today, Labor Secretary Marty Walsh said that, “in a lot of cases,” gig workers should be reclassified as employees rather than independent contractors. As employees, gig workers would get a full slate of benefits: the ability to organize a union, sick time, health care, and a minimum wage guarantee.

It’s a potential blow to a suite of tech companies that operate as “platforms” for workers. Shares of DoorDash, Uber, and Lyft plummeted after the interview was published.

Still, it’s not clear what this might mean. Walsh told Reuters he’d be speaking with companies to make sure gig workers receive “all of the things that an average employee in American can access.” Walsh is a member of a new group within the Biden administration, headed by Vice President Kamala Harris, looking broadly at labor rights. (Politico recently reported that gig companies are targeting the task force in their lobbying efforts.)

The note of qualified support isn’t necessarily surprising coming from Walsh. The PRO Act, a major Democratic agenda item, includes what’s called an “ABC test” for employment. This test would clearly make gig workers employees, not independent contractors. In his speech before Congress on Wednesday, President Joe Biden spoke of passing the PRO Act in the broader context of restructuring the economy to emphasize union jobs. Late in the Trump administration, the Labor Department announced a new measure that would have changed the Fair Labor Standards Act to give gig companies more freedom to not employ their workers; Walsh’s department nixed it before he was appointed.

Still, some worried that Biden’s hiring of Seth Harris as a labor adviser suggested the administration wasn’t planning to put up much of a fight. Harris is responsible for some of the intellectual scaffolding around the gig economy; in a 2015 paper, he proposed a third category of worker—one with certain labor rights but not full employment. Talk of a “third way” has suited the needs of Uber and Lyft in their pursuit of beating down employment organizing efforts. There’s also the recent history of Democrats playing footsie with the tech industry. Former Obama administration apparatchiks went on to jobs at Amazon (Jay Carney) and Uber (David Plouffe).

Moreover, there was the bummer of Prop 22. Even though ABC is used across labor law in many states, the test came to wider notice in 2019 during debates over California’s Assembly Bill 5. Groups rallied against the test (often, as I’ve written, in confusing ways). Gig companies responded with a multimillion-dollar campaign to stop themselves from having to employ their workers in the form of a ballot initiative. When Proposition 22 passed, some Democrats took that as a call to back off.

Democratic US Senator Mark Warner describes California's ABC test as part of "efforts" to "turn all independent contractors…into traditional W2 employees," and says with Prop. 22 (https://t.co/ZVllN7PTy1) "the overwhelming majority of Californians rose up" & "turned down" that https://t.co/deLSQNbL3q

As California discovered, the gig economy puts up fierce resistance to any attempt at regulation. During the last few years, Uber in particular has ramped up its lobbying efforts. In 2020, Pam Bondi, the former Florida attorney general and adviser to President Donald Trump, was keeping busy not only rallying support to “stop the steal” but also lobbying on Uber’s behalf. A month ago, her lobbying firm, Ballard Partners, hired a top aide to Walsh.