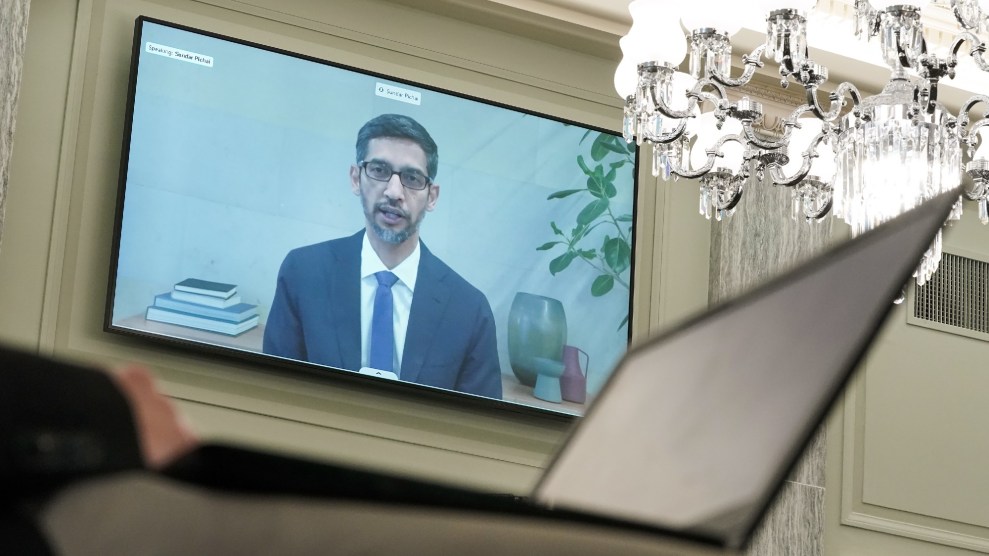 How is Big Tech navigating the Biden era? Consider the newest industry trade group promoting its interests in Washington. Funded by Amazon, Facebook, Google, Twitter, Uber, and other companies, and headed by a veteran tech lobbyist, the Chamber of Progress—a name that plays on the traditionally Republican-leaning Chamber of Commerce—aims to court Democrats and promote “technology’s progressive future.” The apparent strategy: back key pieces of the Democratic agenda in order to fend off tech regulation.

Launched last month by Adam Kovacevich, a former government affairs honcho for Google and Lime, Chamber of Progress says it will push for progressive taxation, action on climate change, and the expansion of voting rights. In an interview Wednesday, Kovacevich said the group plans to pursue these goals through steps like hosting events and issuing op-eds.

Behind its general embrace of some progressive policies will be a more straightforward defense of the industry’s core interests. The bulk of the group’s work will focus on responding to proposed regulation, according to Kovacevich. He wants to thwart what he calls extreme efforts, such as proposals to break up tech companies. He also cites Democrats’ support for union organizers at Amazon as a concern. He declined to say how much money the group has raised from the behemoths backing it.

“This is clearly kind of an astroturf group, intended to head off policymakers’ effort to break up these companies.”

This outreach to the left comes at a time when Americans are increasingly critical of technology firms. And while Silicon Valley’s once-close ties to Democrats frayed years ago, the party’s return to power in Washington has left tech outfits, after years of prostrating themselves before conservative critics, scampering to block Democratic regulatory proposals.

The Chamber of Progress has its eye on influencing centrist Democrats. The group’s initial press release included a quote from Rep. Ami Bera (D-Calif.), a member of the pro-business House New Democrat Coalition. “As the largest caucus of pro-growth Members in Congress, our members support innovation and common-sense regulation,” Bera said. But Kovacevich says he also wants to engage with progressives. That’s tougher. Progressive advocates are sharply critical of the group, deriding its supposed support of liberal causes as ham-handed and cynical.

“This is clearly kind of an astroturf group, intended to head off policymakers’ effort to break up these companies,” said Sarah Miller, executive director of the American Economic Liberties Project, which calls for dismantling big tech companies.

Miller argues the new group’s outreach to the left is too late, coming after many progressives have decided “that these massive technology companies and their business models are fundamentally incompatible with democracy.” Tech giants championing voting rights won’t change that, she said. “Maybe it would have been effective a year ago,” Miller added. “But now, good luck.”

Part of the problem critics have with the group is Kovacevich himself. He boasts a resume that almost seems tailored to alienate progressives. He touts his past work for former Sen. Joe Lieberman, even as he courts activists still seething over Lieberman’s brand of sanctimonious centrism a decade after he retired.

While an undergrad at Harvard in 1997, Kovacevich campaigned successfully for an end to a five-year old ban on grapes in the university’s dining halls. The ban had been imposed to support historic boycotts waged by the United Farm Workers to protest labor conditions for grape-pickers. Kovacevich, the son of a California table grape grower, said at the time that other students who supported the ban misunderstand conditions on farms.

Also at Harvard, Kovacevich befriended a classmate named Tom Cotton, and he later supported Cotton in his successful campaigns for the House and Senate campaigns, in 2012 and 2014 respectively. He even joined Cotton on the campaign trail in Arkansas in November 2014. Cotton has since taken increasingly far right—some say fascist—positions, including his infamous call last year for former President Donald Trump to “Send in the Troops” to “restore order” in cities where Black Lives Matter protests had resulted in looting and violence. Asked if he still supports Cotton, Kovacevich sidestepped: “I support him as a friend, but that doesn’t mean we agree on policies.”

During his 12-years leading Google’s public policy efforts, Kovacevich oversaw an expansion of the search giant’s lobbying. Starting in 2011, he also courted conservatives to help Google fight off a Federal Trade Commission probe into the company’s search and advertising practices and other regulatory proposals.

After Trump’s election, Kovacevich led an effort, he later said, “to build deeper relationships” between Google and the GOP. He contributed in 2018 to the campaigns of Republicans including far-right Trump favorite Rep. Jim Jordan (R-Ohio), who went on to act as a key promotor of false election fraud claims that Republicans are now using to attack voting rights.

In a 2018 meeting later reported on by Wired, Kovacevich touted support from then-House Judiciary Chairman Bob Goodlatte (R-Va.). He called the conservative one of the company’s “most helpful champions,” despite stances on guns and immigration that Kovacevich said “are probably not ones many Googlers would support.” That pragmatic assessment of Goodlatte’s value presaged Kovacevich’s current outreach to Democrats.

In 2018, Google sponsored a reception at the Conservative Political Action Conference, even though critics accused the conference of welcoming “white nationalists” and other extremists. Kovacevich defended the sponsorship as a means to court “the people who influence” lawmakers and build goodwill with Republicans.

Kovacevich was also involved in a Google project to fund academics and think tankers who were making arguments favorable to the company. Google in 2017 and 2018 gave $500,000 to the Global Antitrust Institute at the libertarian-leaning George Mason University’s law school. Facebook and Amazon also helped fund the center, which has churned out policy papers favorable to tech giants and sent several professors to jobs at the FTC.

Jeff Hauser, director of the Revolving Door Project at the Center for Economic and Policy Research, described Kovacevich as “an innovative force in Washington for blurring the lines between corporate lobbying and ostensibly public-interest minded academic work.” That background “makes this new leap by Adam both logical and risible,” Hauser said.

Kovacevich, who left Google amid a 2019 shakeup of its lobbying operation, defends his outreach to Republicans and academics as a part of his job. “I worked with Republicans and Democrats and promoted policies that benefited Google and its users,” he said.

Critics argue that given his background, Kovacevich’s prominent role with the new group demonstrates the arrogance of powerful companies that hope to buy political support for policies that affect their bottom line with superficial support of issues it costs them little to back.

Meanwhile, Kovacevich said he is is eager “to really get engaged in some of the intra-Democratic debates” about technology regulation. In that regard, he is off to a good start.