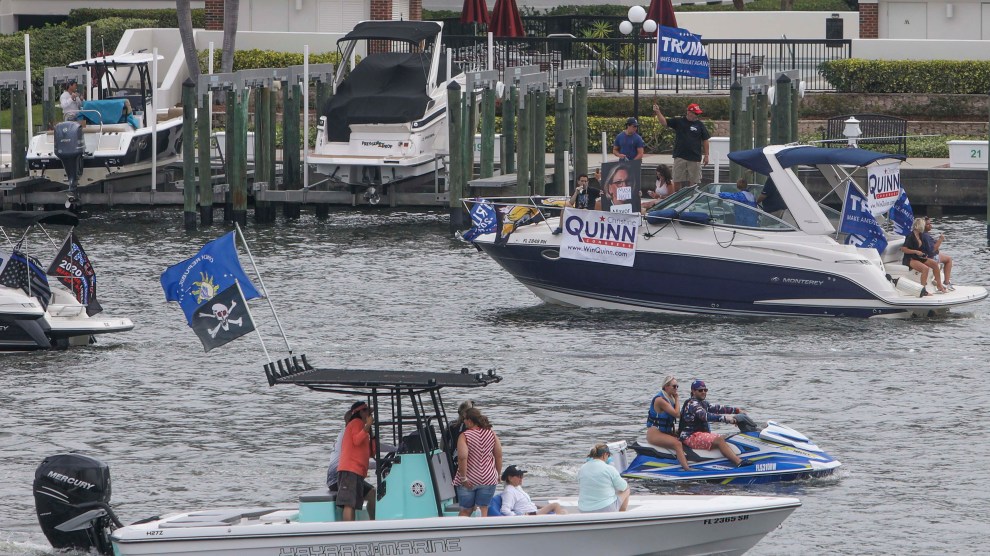 Unless you’re from a certain slice of Florida—the Gulf Coast side near Tampa—you’ve probably never heard of Gasparilla, the city’s annual and well-attended pirate-themed bacchanal. Unless you’re both from Tampa and are fully into the weeds of post-Trump presidency MAGA minutiae, you also have probably have never heard of Trumparilla—a Gasparilla for people who have decided the 2020 election was a sham and that Donald J. Trump ought to still be president.

Though the actual Gasparilla was canceled this year because of the coronavirus, MAGA troll Dion Cini and Cliff Gephart held their pro-Trump flotilla earlier this month in Tampa, which dozens of boaters attended. The entrepreneurs have promised to take the event to a city near you, with follow-ups planned for San Diego, Cleveland, and Las Vegas, according to Trumparilla’s Facebook page.

The MAGA movement has long attracted notable racist supporters and people who readily spout racist things. Cini is one of them. A video shared with Mother Jones by @the_cancel_mob, an anonymous Twitter user who tracks the American right, shows Cini loudly shouting “White power!” during a landside evening gathering at the Tampa Trumparilla.

Cini’s invocation of white supremacy came as he was being recognized from the stage by Gephart for his efforts to organize the event. “I wanna thank Dion, he’s worked his ass off to make this happen. He has struggled with venue after venue,” Gephart said. In response, Cini raised his hands up and rotated to acknowledge applause while shouting “white power,” and flashing an okay hand symbol which, in certain contexts, is shorthand for white power. Prominent Trump ally Roger Stone stands within an arm’s length.

When asked for comment, Cini responded to Mother Jones through email and Twitter direct messages. He wrote that his yelling white power was “a troll,” and claimed “several black people” were in attendance. “Of course [you] won’t show that,” he wrote. Cini also told Mother Jones that his wife is Jewish and sent a picture of himself with a Black person at an event. It’s unclear if the picture was taken at Trumparilla or elsewhere.

“White power or white lives matter is just my fishhook and there’s always a taker,” Cini wrote. “I do the White Lives Matter on multiple occasions, because as a Latino, I think that it’s only it’s fair that white people get their voices heard.” Cini, who clarified that he is actually of Italian descent, explained that he sometimes claims to be Latino, because of the Latin language’s Roman history.

In some ways, Cini is a fringe figure in MAGA world. He has a modest social media following of around 3,000 Twitter followers and has mostly shown up in local news stories for repeatedly brandishing Trump flags where they are unwelcome—like an ice rink in Central Park, Disney World, aboard a kayak on the Hudson River, and so forth.

Despite such hijinks, Cini maintains ties to prominent people in Trump world, like Stone, who was the star of a VIP event at Trumparilla. Photos obtained by Bend the Arc: Jewish Action and Jews Against White Nationalism show Cini hanging out on vessels during 2020 Trump campaign boat parades with Trump sons Eric and Don Jr., as well as former deputy assistant to President Trump, Sebastian Gorka. According to those Jewish activist groups, Cini has also appeared in photographs with neo-Nazi event organizer Jovi Val and neo-Confederate Billy Sessions.

Cini says the picture showing him with Jovi was taken “before he decided to go extreme,” and that he didn’t know Sessions and “never saw him again.” When pressed on if he disagrees with Jovi Val or Sessions, Cini wrote, “Of course I’ve reamed Jovi’s ass many times. But again, he’s not a nazi, he an extreme troller.”

Cini didn’t explain why he thought Val was only trolling. Val has been disowned by the Proud Boys, the neo-fascist group, for organizing a rally supporting far-right individuals who attended 2017’s Unite The Right white supremacist rally in Charlottesville, according to New York magazine. One of those individuals included James Fields, the man who drove a car into a group of protestors, killing Heather Heyer.

Cini is just one of many Trump backers who have continued to construct events praising him since he lost the White House—a role that helps elucidate just who is taking leadership in sustaining the post-presidency MAGA movement.