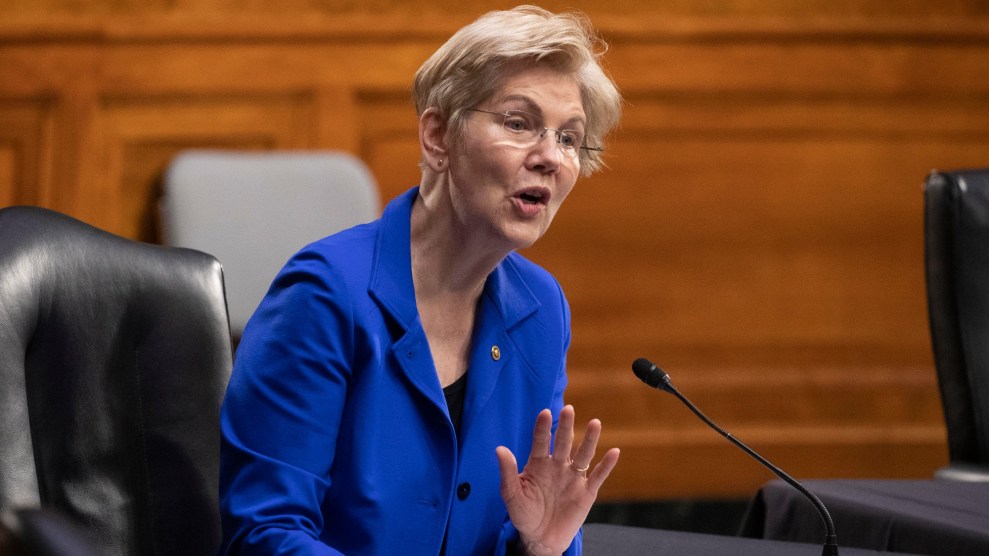 Senate Democrats made the case Tuesday for canceling some student debt, noting that debt forgiveness would stimulate the pandemic-battered economy, help close the racial wealth gap, and aid families who have put off homeownership, child-rearing, or retirement.

But Sen. Elizabeth Warren (D-Mass.), the chair of the Senate subcommittee that held the hearing on student debt—Warren’s first as the panel’s head—focused her questioning less on cancellation and more on the corporations who process the loans she’d like to cancel.

Her main target was Navient, one of the nation’s largest servicers of both federal and private student loan debt, processing the loans of more than 12 million borrowers nationwide. The company’s CEO, John Remondi, was on a panel of nearly a dozen speakers, from members of Congress to academics, who gathered virtually to discuss a wide-ranging set of issues related to student debt, including the proposal championed by Warren for President Joe Biden to forgive up to $50,000 of student loan debt via executive action.

Warren opened her questioning by highlighting the numerous state investigations and lawsuits directed at Navient, as well as the revelation that Navient overcharged the federal government for $22.3 million in student loan subsidies that the company has recently been directed to pay back.

“Mr. Remondi, if a person who worked at the Department of Education stole $22.3 million, they’d be fired,” she said. “Can you explain why your government contracts haven’t been canceled and why Navient has continued to reward you personally with nearly $40 million in compensation since 2014, even as these scandals pile up?” She called for the federal government to end its contracts with Navient—and said Navient should fire its CEO, while he listened. (Remondi said that some of the allegations raised by Warren aren’t true and repeated that his company’s goal is to help all borrowers.)

Later, Warren confronted James Steeley, the CEO of the Pennsylvania Higher Education Assistance Agency (PHEAA), one of the largest servicers for the federal government’s embattled public service loan forgiveness program. She cited several lawsuits and Education Department audits that have accused the company of undercounting borrowers’ payments in assessing their eligibility for public service loan forgiveness—resulting in 98 percent of applicants to the program being denied forgiveness. Steeley claimed that these findings were incorrect but did not elaborate on how.

@SenWarren: Mr Steeley, has the @usedgov terminated your contract, or penalized your company in any way, for your errors of mismanagement preventing teachers & firefighters from getting the debt cancellation they’re owed? pic.twitter.com/EiWQMwyUaN

Both Navient and PHEAA have faced a number of lawsuits regarding their treatment of student borrowers. Warren noted that six states have filed suit against Navient, as has the Consumer Financial Protection Bureau, which alleges that Navient deceived borrowers, nudging them towards higher repayment amounts than they otherwise were eligible for. PHEAA recently settled a lawsuit filed by the attorney general of Massachusetts, agreeing to pay relief to borrowers in the state.

Sen. Robert Menendez (D-N.J.) also catalogued the lawsuits against Navient, asking Remondi how much he was paid across the three years in which the lawsuits were filed. Remondi’s total compensation during that time amounted to more than $20 million—a number that paled in comparison to the billions that Navient is accused of overcharging borrowers, according to Menendez.

Sen. Chris Van Hollen (D-Md.) questioned PHEAA’s Steeley about the process that his company is using to review borrowers’ eligible payments for public service loan forgiveness. Steeley criticized the complexity of the requirements placed on the program by Congress. But Van Hollen responded that the 98 percent denial rate for forgiveness “is not due to complexity alone,” adding that borrowers haven’t gotten the guidance that they should have received from servicers like PHEAA who are administering the loans. PHEAA, he said, “has taken an admittedly complicated process and made it worse.”