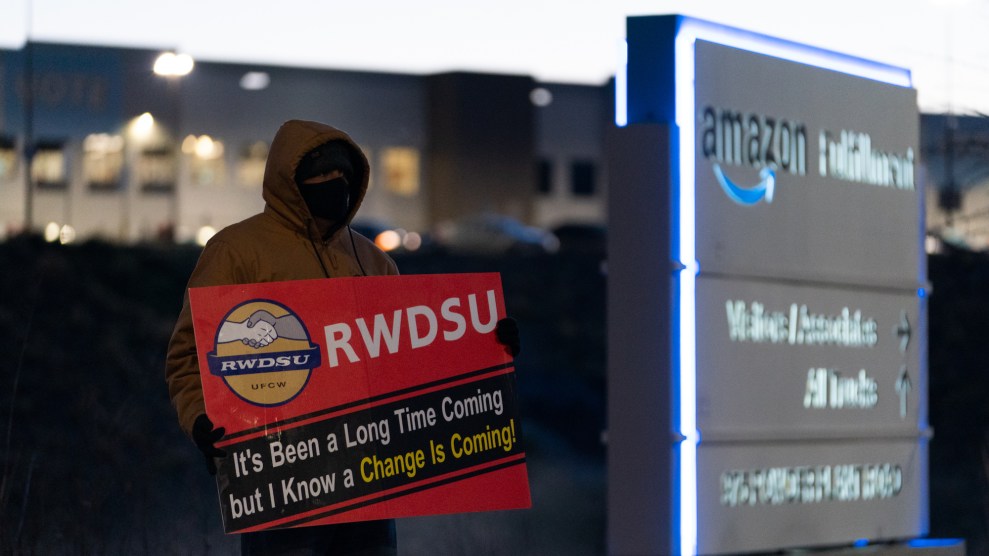 A Retail, Wholesale, and Department Store Union representative holds a sign outside the Amazon warehouse in Bessemer, Alabama. Elijah Nouvelage/Getty

It was 1936, and everyone around Birmingham, Alabama, was talking about a strike that had just begun in nearby Bessemer. A subsidiary of US Steel had proposed switching from an hourly wage to a tonnage rate, while also laying off hundreds of workers to force those who remained to work faster. The 2,100 miners in the radical International Union of Mine, Mill, and Smelter Workers, most of them Black men in the Jim Crow South, had voted overwhelmingly to strike. Many of their white colleagues, who belonged to a company union, stayed on the job.

Pete Casey, one of the Black workers, had been beaten after the company’s “thugs” came across his union membership card, reporter Beth McHenry wrote in the communist newspaper the Daily Worker. The Tennessee Coal, Iron, and Railroad Company (TCI), the US Steel subsidiary, had been happy to hire Black workers when it thought they’d be docile, but not after they organized. One member of the union, known as Mine Mill, told McHenry, “Them company fellows come around saying, ‘What’s the matter with you all colored? You used to be such loyal men.’”

When McHenry visited, a group of men sitting outside the general store warned her that she might end up with buckshot in her if she went up to the mine. There had been shooting on the mountain. Bessemer resembled a war zone.

Nearly a century later, workers at an Amazon warehouse in Bessemer are waiting to learn who won the union election that ended last week. Roughly 85 percent of Amazon’s nearly 6,000 workers in Bessemer are Black. They have now voted in the first major union election in their employer’s history. A vote to join the Retail, Wholesale, and Department Store Union would be the biggest electoral victory for organized labor since 1991. It would also send a signal to hundreds of thousands of Amazon workers across the country that they can prevail over a company controlled by the world’s wealthiest man.

The process of figuring out who won will take weeks, if not months. Both sides will likely challenge voters’ eligibility, and if the election is close, the NLRB will rule on each of those challenges. After the votes are counted, either side could try to force a new election results by arguing that the other violated election rules. Those challenges could eventually end up before the labor relations board in Washington.

And winning the vote would just be the start. Even if the RWDSU pulls out a victory, better conditions are not guaranteed. In about half of union victories, workers still don’t have a collective bargaining agreement a year later because of their employers’ stonewalling. The company can refuse to come to an agreement, and if negotiations drag on for years without hope, unionized employees sometimes give up.

After a year without an agreement, anti-union workers need to get just 30 percent of their colleagues to sign a decertification petition in order to force a new election. If a majority then back decertification, union representation ends. The procession of challenges to form a union—getting enough support to hold an election, actually winning the election, then getting a labor agreement—goes a long way toward explaining why roughly half of workers in the United States say they’d like a union, but only about 1 in 16 of those in the private sector actually have one.

The fate of the Mine Mill workers illustrates the uphill battle for the Bessemer Amazon workforce even if it does vote to unionize. Following the 1936 strike, TCI embarked on a more than decade-long campaign to crush Mine Mill. And the fact that the unionized workers were mostly Black was at the center of that effort.

In the 1930s, Mine Mill was known for left-wing politics and an embrace of racial integration that was rare among unions at the time. As UCLA historian Robin D.G. Kelley documents in Hammer and Hoe: Alabama Communists During the Great Depression, more than 80 percent of Mine Mill’s members in the Birmingham area were Black. When Mine Mill organized workers in the Birmingham area in 1933, TCI went to extreme lengths to try to stop it:

Union meetings were held in the woods, in sympathetic black churches, or anywhere else activists could meet without molestation. Company police used violence and intimidation in an effort to crush Mine Mill before it could establish a following, but when these tactics failed, officials exploited racial animosities. TCI created a company union, the ERP, which used racist and anti-Communist slogans to appeal to white workers. Mine Mill quickly earned the nom de guerre “[n*****] union,” and white workers who repudiated the ERP were labeled “communists” and “[n*****] lovers.”

Despite the opposition, Mine Mill succeeded in organizing miners in and around Bessemer. When TCI decided in 1936 to lay off some workers and pay the rest based on how many tons of iron ore they mined, Mine Mill workers went on strike, and things quickly turned violent. There was shooting in both directions, violent attacks against Mine Mill members, a company pool shattered by dynamite, and at least one death.

After four months of striking, Mine Mill gave in and agreed to try the new incentive system on a four-month trial basis. The company proceeded to fire about 150 workers who had supported the strike. It would take two years for the National Labor Relations Board to decide that the firings constituted illegal retaliation for union organizing. The hearings lasted seven months and featured testimony from roughly 400 witnesses. TCI ultimately agreed to offer jobs to the 150 men it fired, cover lost earnings, and adopt a collective bargaining agreement.

It was a rare win, but TCI was on its way to destroying Mine Mill. As covered by the NPR podcast Code Switch, TCI spent years diluting Mine Mill’s power by hiring white workers hostile to the union and its mostly Black members. In 1949, the United Steelworkers stepped in to force an election to try to wrest power from Mine Mill in Bessemer. Mine Mill charged the Steelworkers with partnering with the Ku Klux Klan to scare Black workers and white colleagues who supported Mine Mill into backing the Steelworkers.

Just before the election, Mine Mill’s secretary-treasurer, Maurice Travis, lost his eye after being attacked by Steelworkers at a radio studio. Of the roughly 5,200 miners eligible to vote, 2,800 were now white. The Steelworkers took control from Mine Mill with 2,693 votes.

A congressional hearing soon afterward featured testimony from Eugene Calhoun, a Black miner in Bessemer who, earlier in his 29-year-career, had overseen white workers as a foreman. After the miners joined Mine Mill, Calhoun told Rep. Adam Clayton Powell Jr., the first Black member of Congress to represent New York, TCI split up white and Black workers. In the lead-up to the 1949 election, he said, the company stopped hiring Black workers altogether. His colleague Frank Allen explained to the committee, “They hired all white workers in order to get a majority of their employees white, in order to defeat this election…and they did it by playing race against race.” The 1949 election was the culmination of a 16-year campaign to crush Black workers’ ability to organize in Bessemer.

There are similar risks today in Bessemer. Amazon has faced repeated allegations of retaliation against workers in the past year. Following strikes at a Chicago sorting facility last year over COVID-19 safety concerns, Amazon workers who’d helped organize the strike said the company targeted them by writing them up for things like violating social distancing guidelines. In February, the National Labor Relations Board sided with workers who said Amazon had engaged in unfair labor practices; Amazon agreed to settle the case, the Intercept reported. After a similar walkout at an Amazon facility in Queens last March, the NLRB determined that Amazon illegally interrogated and threatened a worker who had helped organize the effort to demand better protection from COVID-19, according to documents obtained by Vice News.

And just on Monday, the New York Times reported that the NLRB had found that Amazon illegally retaliated against two employees when it fired them last year from its Seattle headquarters after they criticized the company’s climate change policies and the conditions in its warehouses.

One problem for workers is that the NLRB’s determinations don’t lead to significant financial consequences. In cases where it finds that a company illegally fired an employee for organizing, the worker is entitled only to back pay minus any wages she earned, or could have earned, while the case was being decided. For companies as rich as Amazon, retaliation is cheap.

If Amazon did start brazenly firing prominent union organizers in Bessemer, it would face an onslaught of bad press—something that hasn’t always stopped the company from violating employees’ labor rights in the past. But one of the lessons of TCI’s war against Mine Mill is that there are subtler means of retaliation. Amazon could discipline or fire union supporters for unrelated infractions, pass them over for promotions, or avoid hiring people it thought would be sympathetic to unions in the first place. All of this would be more difficult for workers to prove.

The difference from the days of Mine Mill is that far more people are paying attention now. In 1936, the New York Times ran a few wire stories about the strike and then moved on. Even the Daily Worker devoted relatively little attention to TCI’s hiring of white workers to crush a left-wing union.

The current Bessemer election, by contrast, was featured in more than 53,000 stories by late March, in essentially every significant news outlet in the country. Two recent survey from progressive pollsters showed national support for unionization in Bessemer at 69 percent and 77 percent. Even the president weighed in on the union’s behalf. Amazon knows that this time around, whatever it does to undermine the unionization effort, the country will be watching.