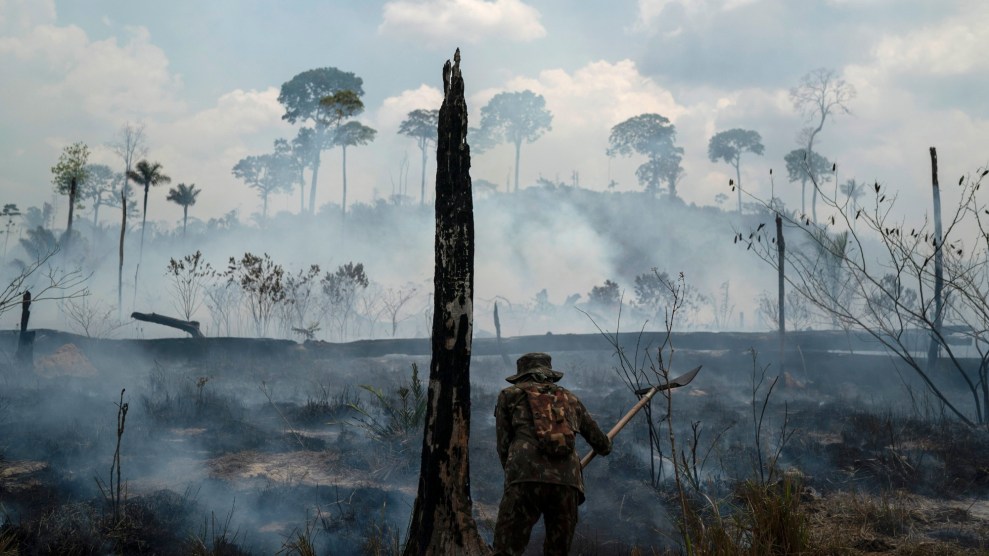 A Brazilian soldier puts out fires in the Amazon in 2019.Leo Correa/AP

In a campaign video released on Monday, the Articulation of Indigenous Peoples of Brazil (APIB) urged President Joe Biden not to trust the far-right Brazilian leader Jair Bolsonaro. “We know the White House is making a secret climate deal with Bolsonaro,” the message says. “Do not let this man negotiate the future of the Amazon.” The video, which is going viral and has been shared by celebrities like actor Mark Ruffalo and Brazilian singer Anitta, goes on to say Brazil’s president has declared war on Indigenous people and on democracy, is spreading “COVID, lies, and hate,” and has called into question the results of the United States’ presidential elections that culminated in his friend and ally Donald Trump’s defeat. “Here’s the deal, Mr. President: It’s either the Amazon or Bolsonaro. You can’t have both. Which side are you on?”

Mr. @JoeBiden , the indigenous peoples from Brazil know you are making a secret climate deal with Bolsonaro. We must warn you. DO NOT TRUST HIM.
If you want to help the Amazon, talk to the people that live and keep the forest alive. #AmazonOrBolsonaro #WhichSideAreYouOn pic.twitter.com/pKLHDNSEJg

Bolsonaro is among the 40 world leaders Biden invited to attend a virtual climate summit next week on Earth Day “to galvanize efforts by the major economies to tackle the climate crisis.” The US and Brazilian governments have reportedly been negotiating a billion-dollar agreement to fight deforestation and climate change. According to the Brazilian government, Brazil’s minister of the environment, Ricardo Salles, and other Cabinet members, as well as representatives of the Foreign Affairs ministry, have met with former Secretary of State John Kerry, who Biden appointed as the US special presidential envoy for climate, as part of a series of online bilateral meetings.

Last month, Salles said in an interview that Brazil would commit to reducing the deforestation of the Amazon by 40 percent in exchange for $1 billion in funds over one year from the US government. One-third of those funds would go toward financing direct initiatives to curb deforestation, and two-thirds to foster economic development in the region. According to Brazil’s most prominent newspaper, the Folha de S. Paulo, Salles showed Kerry’s team a PowerPoint presentation with the illustration of a stray dog wagging its tail and drooling over a case of rotisserie-style chickens—the kind you can find in any bakery in Brazil.

In a rare outburst of sincerity, minister Ricardo Salles showed to @ClimateEnvoy @JohnKerry's team that Bolsonaro's administration is like a stray dog just waiting for a waver of the owner (@POTUS @JoeBiden) of the chicken (US$ billions) to bite and run. #AmazonOrBolsonaro pic.twitter.com/XQUxhAgRQj

The image, which Folha de S. Paulo reported was not immediately understood by the US officials, apparently carried the message that the Brazilian government is eagerly anticipating a reward for any collaboration on climate, but is likely “to bite and run.”

Last week, almost 200 Brazilian civil society organizations and collectives published the open letter, which they sent to the offices of Biden, Vice President Kamala Harris, Kerry, and Democratic lawmakers. They warned that giving “resources and political prestige to Bolsonaro” and entering any deals without the Brazilian government showing a good-faith effort to reverse its anti-environmental agenda would amount to an endorsement of the “humanitarian tragedy” and destructive policies underway in the country. “It is not reasonable to expect the solutions for the Amazon and its people will come from negotiations made behind closed doors with your worst enemy,” the letter reads. For Greenpeace Brazil, giving Bolsonaro “a blank check” comes with no guarantee that the money would be used to protect the rainforest. In fact, it could risk making Biden complicit in its ongoing environmental destruction.

“It is not reasonable to expect the solutions for the Amazon and its people will come from negotiations made behind closed doors with your worst enemy.”

The prospect of a deal between the two countries on the environment marks a shift from the more adversarial stances both leaders took before the US election. At a presidential debate in September, Biden suggested that Brazil might suffer “economic consequences” if it didn’t “stop tearing down” the Amazon and called for the international community to offer $20 billion to end illegal deforestation. In response, Bolsonaro characterized Biden’s remarks as “coward threats” and an attack on Brazil’s sovereignty. Since his election, the US president has sent his Brazilian counterpart a letter outlining opportunities for bilateral collaboration on the pandemic and climate.

Behind the scenes, however, the Biden administration has strongly signaled that Brazil’s approach to climate will set the tone for the relations between the two countries moving forward. A State Department spokesperson recently told CNN that the US expects “a very clear commitment” from the Brazilian government to fight deforestation in the Amazon, and Todd Chapman, the US ambassador to Brazil, reportedly gave Bolsonaro an ultimatum to set environmental goals at the April summit.

!!! @POTUS is about to make a secret climate deal with Bolsonaro. The indigenous peoples from Brazil are warning: Do not trust Bolsonaro. Don't let him negotiate the future of the Amazon.
👉 @leodicaprio #WhichSideAreYouOn #AmazonOrBolsonaro pic.twitter.com/HI7GYL57ZK

“Bolsonaro is the problem, not a solution,” Marcio Astrini, the executive secretary of the Brazilian Climate Observatory network of organizations, wrote on Twitter. Indeed, the Brazilian president’s record on the environment is nothing short of disastrous. During his administration, deforestation rates in the Amazon—driven by land-grabbing and illegal logging and mining—reached a 12-year high. This March a loss of 367,61 km² (or about 90,838 acres) was recorded, threatening an increased risk of wildfires. Bolsonaro has consistently dismantled environmental policies, loosened regulations, and drained enforcement agencies of resources, while staffing them with military appointees. Just last week, Salles fired four officials in leadership positions at the Brazilian Institute of Environment and Renewable Natural Resources (IBAMA), which handed out 42 percent fewer fines for violations against the Amazon in 2020 when compared to the previous year.

All this has taken place amid one of the worst COVID-19 outbreaks, largely as a result of Bolsonaro’s refusal to follow and implement public health recommendations, for which he’s currently facing a congressional investigation. Bolsonaro has also proposed a bill to allow mining on protected land. It’s just one example of how he’s taken advantage of the national focus on the pandemic to weaken environmental protections, while invasions of Indigenous territories by miners, ranchers, and land grabbers and attacks on environmentalists have spiked. The administration’s strategy of deploying military troops to fight deforestation has failed. About $500 million in donations from developed countries to the Amazon Fund, which is managed by the Brazilian Development Bank, have remained untouched, raising questions about how serious the government has been in its request for additional foreign aid, now from the US. Meanwhile, the minister of the environment is pushing to pass so-called “land-grabber bills” that would lead to even more occupation and exploitation of public lands.

Earlier this year, Indigenous leaders asked the International Criminal Court to investigate Bolsonaro for crimes against humanity for the persecution of Indigenous people and environmental damage. Environmentalists say his actions rise to the level of “ecocide,” which has yet to be recognized under international criminal law. Indigenous communities have also been disproportionately affected by the pandemic, with more than 52,000 confirmed cases among 163 different populations. In the face of existential threats to their lives and livelihoods, they are demanding a seat at the table in any negotiation with the United States about the Amazon. “Biden’s election has enshrined the will of Americans to be in the right side of history,” the letter signed by APIB and other Indigenous and environmental groups says. “Doing it right for Brazilians would be a powerful show of that will.”