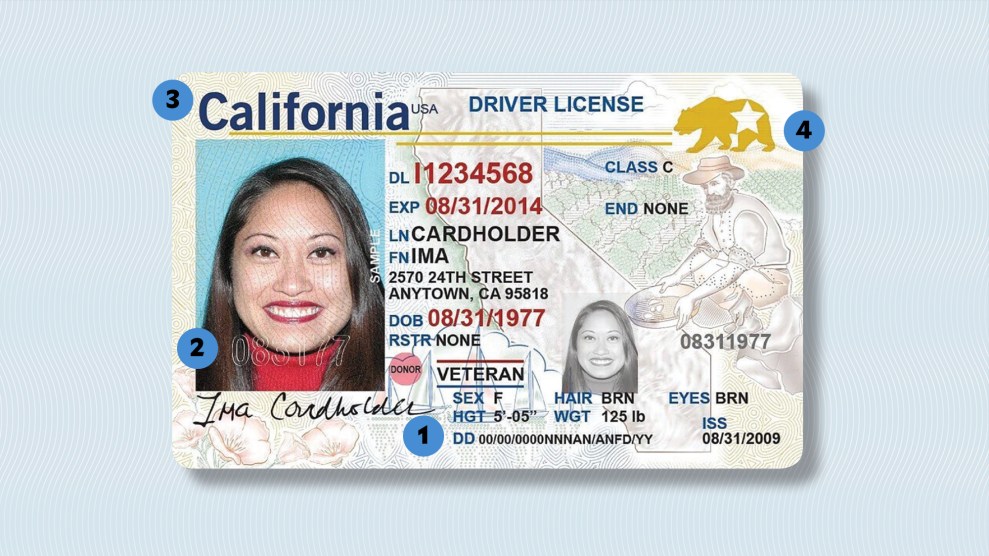 1. Beginning in May 2023, the Department of Homeland Security will require anyone who wants to board a flight within the United States to produce “Real ID”–compliant identification like the driver’s license shown above. (The Real ID deadline has been pushed back twice by the pandemic.) Components of the ID may seem benign. The bearer of a Real ID, for example, is uniquely identified by the nondescript “DD,” or Document Discriminator, a code that denotes where and when the card was issued. But they tell a story when examined in detail.

In a narrow sense, the Real ID is the product of a 15-year effort to ensure, in the aftermath of 9/11, that applicants for passports and other identifying documents provide secure underlying documentation. (Real ID applicants have to provide documents showing their legal name, date of birth, Social Security number, citizenship or immigration status, and two proofs of address.) More broadly, the Real ID is the product of an extraordinary social transformation. Thanks to more than a century’s worth of slow bureaucratic labors, our modern passport and ID systems control how individuals come and go, and identify who is “in” and “out”—who gets to drive, who gets access to social benefits, who gets to vote. The United States has a wall already. It’s just made of paper.

2. Identification has long provided the machinery for exclusion. In the runup to the 1892 presidential election, California Rep. Thomas Geary proposed a new law designed to strengthen measures excluding Chinese people from the United States. Among its provisions was a requirement that Chinese residents register and obtain an identification certificate including a photograph—“to be tagged, marked, and photographed,” as one critic put it. As ultimately adopted, the law called for Chinese laborers to obtain certificates—passports—within one year and, in the event of their arrest, to bear the burden of demonstrating their legitimate presence in the country. Such documents would soon provide the foundation for enforcing other exclusionary laws, such as the Immigration Act of 1924, which placed strict quotas on admissions of immigrants (and excluded Asians altogether). Over time, passports and other identification systems have come to be deployed universally for the purpose of regulating international movement.

3. In a manual for driver’s license tests from the pre–Real ID era, California said it was “critical” that ID documents were accurate and authenticated. “Eligibility for government services, the issuance of various licenses, the assessment of taxes, the right to vote, etc.” hung in the balance. Identity cards have become something like the currency of domestic administration. As a rule, the more social benefits become available from the state, the more concern arises about who is eligible to get them. IDs of various kinds help sort this out, or keep out those regarded as ineligible. In December 1791, the French Legislative Assembly sought to ease the strain on the nation’s coffers by tightening eligibility for state transfer payments and its documentary attestation. Anyone receiving payments from the public purse had to produce a certificate avowing that he or she currently resided in France, and had done so without interruption for the previous six months—a passport. Today, we take for granted that a “foreigner” is someone from another country whose movement has to be monitored, but at the time of the French Revolution, foreignness in the legal sense remained a murky business. It wasn’t until France had become a national community of citizens with rights and privileges that it invented an identity for people deemed ineligible for either.

4. Real ID compliance is indicated by a star at the top of the license. On California IDs, it sits atop the state’s grizzly bear logo like a sheriff’s badge, the feds having deputized the state into their project of controlling human movement. Over the past two centuries, there has been a similar shift in the reach of documentary controls from the local and municipal level to the national level. Conceived in a post-9/11 garrison mentality, the Real ID is intended to create a nationwide system of identification that is more trustworthy and reliable than its predecessors. States have taken pains to clarify that the Real ID is not required to apply for public benefits. But history suggests that a tightened ID system will eventually be used to establish who is and who is not a “real American.” IDs aren’t just a way of telling the government who you are. They are a way for the government to shape who it is for.

This is coming into focus as vaccines roll out. The coronavirus pandemic has led to “lockdowns,” “pods,” and “bubbles.” Movement was free but with implied sharp barriers between insiders and outsiders. One of the reasons passports and their equivalents were created in the first place was to constrain the movements of those carrying potentially disastrous illnesses. With some vaccinated against COVID-19 and others not, event coordinators, employers, and governments have begun to demand proof of vaccination in the form of “passports.” These may be produced by private entrepreneurs or by governments. However much they may discriminate against certain social groups, vaccine passports, like the coronavirus itself, will probably be with us for some time.

Get your papers in order.

Adapted from The Invention of the Passport: Surveillance, Citizenship and the State, second edition.