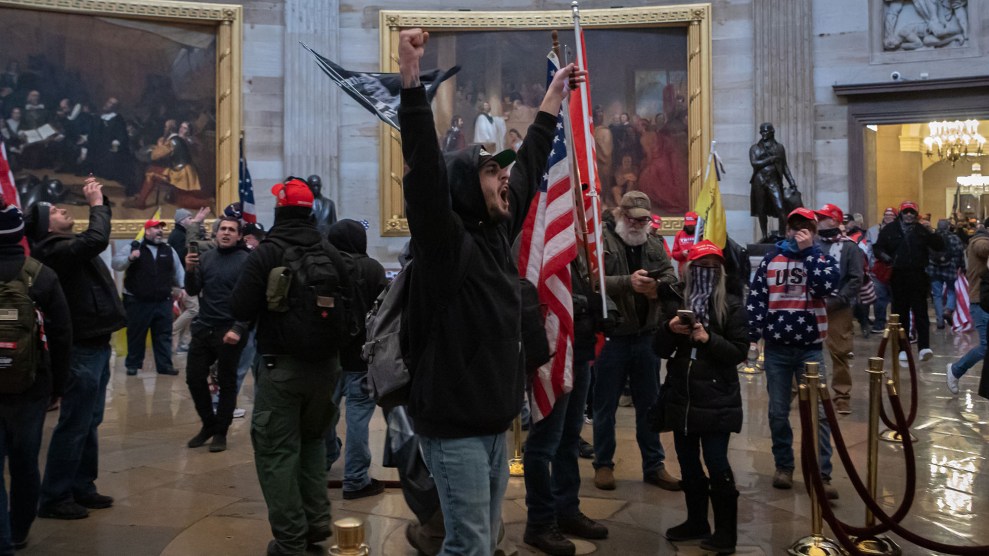 Since before he was even sworn into office, Joe Biden has made it clear that fighting the spate of right-wing extremism would be a top priority for his administration. The day after the Capitol insurrection, in announcing his Justice Department nominees, Biden said he wanted to take the department back to its original roots “to stand up to the Klan, to stand up to racism, to take on domestic terrorism,” he vowed. “This original spirit must again guide and animate its work.”

Though the Biden presidency is still nascent, the fight against domestic terrorism and extremism has been at the center of the administration’s work so far. Immediately after he was sworn in, Biden ordered his just-appointed director of national intelligence, Avril Haines, to work with the FBI and Department of Homeland Security to put together a top-to-bottom assessment of the threat from violent extremists. That report, which came out last month, found that “newer sociopolitical developments,” like the pandemic and the rise of right-wing conspiracy theories, “will almost certainly spur some [domestic violent extremists] to try to engage in violence this year.” Meanwhile, the Justice Department has arrested at least 360 people in connection with the insurrection. And the Defense Department is engaged in its own efforts to address extremism in the military; in early February, Defense Secretary Lloyd Austin signed a memo directing commanding officers to conduct a one-day “stand down” to discuss extremism in the ranks with personnel.

After four years of a president who openly palled around with, and praised, violent white supremacists, it’s certainly a breath of fresh air that the current administration seems to be taking the threat seriously. But is that enough? It’s still very early for any administration to take the sort of significant actions necessary to curb the extremism that has festered and flourished in the shadows of American society for years, but the right early moves are key for addressing the issue in the long term. So far, experts who study extremism say the new administration is going in the right direction. But that hasn’t amounted to much more than looking at the issue under a microscope, and there may be reason to be concerned that, beyond “taking it seriously,” concrete action to curb right-wing extremism might be more difficult than the Biden administration has made it seem.

“In tone and in prioritization, the difference between the previous administration and this one could not be more stark,” says Ryan Greer, a former State Department and Department of Homeland Security official who now studies extremism at the Anti-Defamation League. “They really seem to get that [extremism] needs to be a big priority, and they get generally how that priority should manifest.” Greer, who met with Biden officials in the first few days of the administration to discuss extremism, praises the recent intelligence report from the DNI as a good first step in tackling the issue. “We wanted them to understand the threat and show that they’re prioritizing it,” he says. “Announcing this intelligence review was a great way to start.”

“We just came so late to admitting how serious this threat is, and so now a lot is going to have to be done.”

After an unprecedented attack like the one on the Capitol on January 6, simply denouncing extremism might not seem like radical action, but Heidi Beirich, co-founder of the Global Project Against Hate and Extremism, says it goes a long way. Speaking out against violence toward Asian Americans and denouncing white supremacy and hate crimes “immediately seems like a small thing,” she says, “but I think it’s actually a huge thing to set the tenor about what is acceptable politics and behavior and what is not.” That’s especially true after Trump set a tone that emboldened extremist groups with his “very fine people on both sides” comment after the deadly Charlottesville white supremacist rally in 2017, as well as his nod to the Proud Boys to “stand back and stand by” during a debate in September.

Prior to Biden’s swearing in, Beirich’s organization issued a series of policy recommendations for the administration to address extremism. Among them was for the Defense Department to immediately adopt a system to screen white supremacists out of the military and law enforcement agencies. While such a policy has yet to be implemented, the department has initiated an effort to crack down on extremism within its ranks, starting with Austin’s “stand down” order. It’s an important first step, Beirich says, but “the proof will be in the pudding in terms of what policy changes they do.”

Both Greer and Beirich praise the DNI intelligence report for aptly articulating just how grave the threat is from domestic violent extremists—something their organizations have been warning about for years. But the actual intelligence in the report, they say, is a bit thin. The report, which is only four pages, explains that the most lethal threats of violence come from racially motivated and militia violent extremists who are more likely to carry out “mass-casualty attacks against civilians,” while “lone offenders or small cells of DVEs…are more likely to carry out violent attacks in the homeland.” “I think it would be nice to know where the intelligence is coming from and how they are gathering it, because it’s just a mystery,” Beirich says. Greer adds that it’s “really hard for us to tell how good [the report] is because it’s so general.”

“We don’t have de-radicalization programs and we need them.”

Since the release of the report, the Biden White House has been grappling with its next steps. It’s clear that extremism from white supremacists and far-right groups is a big problem, but what to do about it? So far, the administration has played coy about committing to any executive orders or supporting any legislation to address the issue. But a recent New York Times report hints at what sort of actions Biden is considering. Rep. Elissa Slotkin (D-Mich.) told the Times that she’d talked to White House officials about appointing a “domestic terrorism czar” within the office of the DNI as well as an executive order to update the federal government’s guidance on its terrorist watch list, typically used to screen suspected foreign terrorists from entering the country.

That could create civil liberty problems, Greer says. “There’s no such thing as a domestic terrorist in the eyes of the law. For terrorist organizations, the [terrorism designation] is effectively saying we’re more or less in a targeted war against this overseas organization like al-Qaeda, so therefore they don’t have Constitutional rights,” he says. “But there’s no political juice around creating designations for domestic terrorists. So I don’t know how they would end up on the terrorist watch list.”

Perhaps the most significant move that the Biden administration has made comes at the Department of Homeland Security, which has allocated $77 million to state and local governments for intelligence sharing across states, as well as reinstating $20 million worth of grants for organizations that are researching extremist prevention strategies. Trump gutted the program in 2017, but then restored $10 million in the last year of his term.

Still, there’s a number of things Biden should be moving on, and it’s not clear that he is. “We don’t have de-radicalization programs and we need them,” says Beirich. She also says that while the allocation of the DHS money is important, she worries that current federal staff aren’t skilled enough in the area of extremism. In 2009, the Obama White House stirred controversy when the DHS released a report about the danger of far-right extremism. Conservatives were so outraged—particularly by the report’s finding that veterans were especially vulnerable to recruitment to far-right extremist groups—that Obama eventually rescinded the report and dissolved the team that authored it completely. Since then, the DHS hasn’t had staff researching domestic extremism and she worries that the politicization around far-right extremism may have affected staff in a negative way. “I hope they reach outside of government for experts to staff this issue.”

As much progress as Biden has made in his first few months, the reality is that the country was so far behind in addressing homegrown extremism, it has a lot of catching up to do. “We just came so late to admitting how serious this threat is, and so now a lot is going to have to be done,” Beirich says. “It would be nice to have more of what they are thinking in the public domain so it could be up for a wider discussion than just within government circles.”