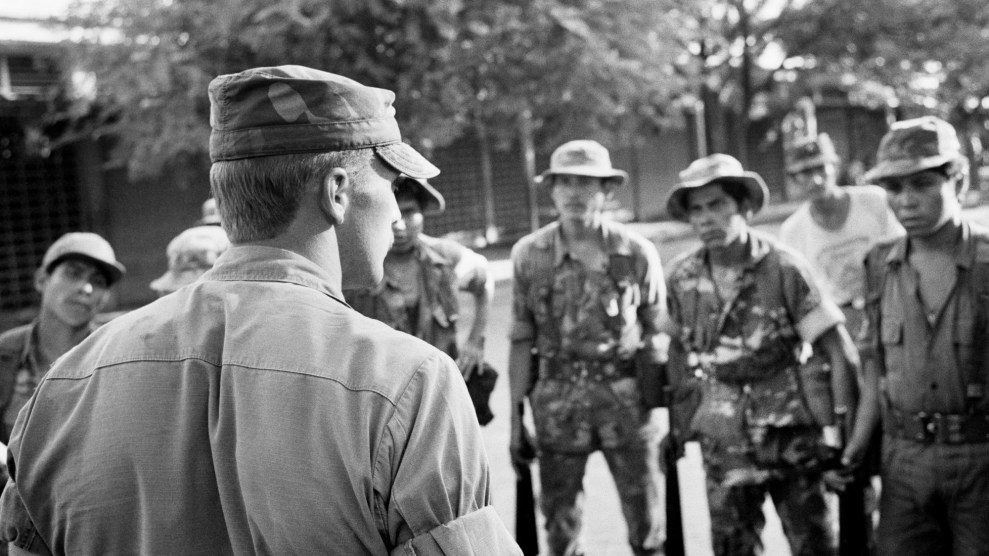 Few expressions have gained as much currency in recent weeks than “root causes of migration.” Paradoxically, the more frequently it is evoked, the more difficult it becomes to discern what it really means. Indeed, depending on who you ask, the “root causes” could mean very different things. The migrants themselves are likely to consider a web of interconnected circumstances—including a hunger crisis exacerbated by the pandemic and devastation from hurricanes—that make life in Central America impossible and become catalysts pushing thousands of single adults, families, and unaccompanied minors to flee to the United States.

To “change the life and circumstances of why people leave in the first place,” as Biden put it during a press conference in late March, has become the central theme in the current administration’s strategy to stem the increasing flow of migrants; 172,000 people, 19,000 unaccompanied minors among them, were apprehended at the southern border last month, with the majority expelled immediately. In order to achieve this, the president has proposed a $4-billion four-year plan and a coordinated effort with governments and civil society in Guatemala, Honduras, and El Salvador to fight endemic corruption, criminal activities, and inequality, and promote human rights. Invoking a “strong and abiding friendship” and “shared history and values” among the countries, Biden has vowed to restore US leadership in the region.

But for those who remember recent history, the idea that the United States will uphold “security and rule of law” in Central America has an ominous ring, as historian Aviva Chomsky wrote recently. It recalls decades of failed and destructive foreign policy and direct intervention in internal affairs that advanced US interests at the expense of the political and economic stability of these countries. Cecilia Menjívar, a professor of sociology at UCLA points out that the conversation around “root causes of migration” often ignores the key role the United States has historically played in creating and perpetuating some of these very drivers of migration it now is attempting to mitigate. “You can’t leave that part out,” she says. Born and raised in El Salvador, Menjívar has researched migration from Central America for the past 30 years and has written books about gender-based violence in Guatemala and the impact of hostile immigration policies on Salvadoran communities in the United States. She spoke to Mother Jones about the importance of contextualizing why people flee Central America and confronting the moral responsibility of the United States has for many of the “root causes of migration:”

On historical inequalities and economic development: In a broad sense, the three countries—Guatemala, El Salvador, and Honduras—are similar regarding the main factors that have propelled US-bound migration. Early in their history, ruling elites in those countries adopted, generally speaking, economic development models and modernization strategies based on one or two agricultural products for export, and exploitative labor conditions that relied on and amplified already existing social inequalities. The decision to focus on monocultures—chiefly banana and coffee—was influenced by the US government and corporations and had deep ramifications for these very small economies.

The Great Depression of the 1930’s deeply affected these countries, and conditions got really dire. The effects of major economic shocks were experienced on the ground as more labor exploitation and more dispossession of land. Small farmers defaulted on loans, lost their land, and had to work for large landowners. When farmworkers started protesting working conditions in the banana or coffee plantations and land encroachment, the United States would quickly lend a hand to the governments to quash the uprisings. The response was more military aid and the escalation of the dictatorships, with full backing from the United States that guaranteed a “peaceful” context where multinationals could continue to do business.

“When farmworkers started protesting working conditions in the banana or coffee plantations and land encroachment, the United States would quickly lend a hand to the governments to quash the uprisings.”

That went on until the 1970s when opposition groups [to the US-backed right-wing authoritarian governments] became more organized and eventually culminated in the civil wars of the 1980s. The United States played a major role in creating those conditions, but collaboration with the local ruling elites, the land and business owners who were running the countries was vital. These historical economic and military connections are not always mentioned, but they are crucial because those are the ingredients that have made the Central American countries what they are today. That’s an important piece of this puzzle: These countries didn’t evolve into what they are right now solely on their own.

On violence and the legacy of militarization: During the wars in Central America in the 1980s, US military aid to the government of El Salvador alone totalled $6 billion dollars—or $1.5 million a day for 12 years. The US had military advisers playing important roles in the Salvadoran civil war and the CIA trained counterinsurgency soldiers and spurred the creation of death squads. In Guatemala [where the United States planned a coup to overthrow a democratically elected president in 1954], the 36-year war wiped out entire villages, and scorched earth campaigns left hundreds of thousands of people disappeared or killed, especially among the indigenous Maya. Honduras didn’t have a civil war like the other countries, but it served as a military base for US operations in the region. [US intervention] not only led to civil unrest, but it also added layers of military responses that did not disappear with the signing of peace accords in the 1990s. Post-civil wars, the violence transformed from political violence of the previous decades into what’s called everyday violence, or “common crime” today.

“The conditions in Central America today did not just happen to these countries. They were created.”

On the United States taking responsibility for its role in the current circumstances: The causes of migration that everybody talks about 99.9% of the time are poverty and violence. But they don’t take a step back to at least try to understand how that came about. Being violent and poor are not an intrinsic or a natural condition of Central Americans. These people are not naturally violent. The conditions in Central America today did not just happen to these countries. They were created. There’s a history behind how they got to where they are. In that history, the United States has played a key role in sustaining those conditions through the strategies that it has more strongly favored—including militarization over social policies—to sustain its position of economic, political, and cultural power in the region. That is something people don’t talk about. It’s easier to mention poverty and violence because addressing any form of responsibility would mean taking a different approach to migration from Central America. It may entail no longer treating migrants as people who need to be stopped before they come here, and switch to a more humanitarian treatment that reflects a moral and ethical responsibility for the [US] role in the creation of those conditions.

Bill Clinton apologized to the Guatemalan people for what his country had done, mostly for the genocide of the Mayan people. But that’s where it ended. No other administration has mentioned responsibility for this long and complicated history, and the role the United States has played, always in collaboration with local elites, in creating these conditions people have been fleeing from for three decades.

On the potential for change: If it’s going to be more of the same, nothing will change. A good start would be to not reproduce the same structures of inequality, extractive approaches, and exploitative labor conditions. Sending money to governments hasn’t been a solution. In fact, that has been the problem. Giving money to the Honduran government? The president [Juan Orlando Hernández] is being accused of drug trafficking and his brother [Tony Hernández] is in prison in the United States. A lot of that foreign aid also goes to military interventions and the creation of more enforcement agencies that have proliferated in the region. El Salvador, for instance, has a border patrol at the insistence of the United States. Instead of opting for creating better conditions for the people, the strategy has been to send more heavy-handed military aid in the name of security. This has historically been the problem. No wonder people want to flee. Resources should go to organizations on the ground who are better attuned to what people need.

On the Biden administration’s messages to discourage migration: “Don’t come?” What is that? Is that a position that’s going to inform policy? It’s out of context, out of touch. It’s difficult to react to that. I think that’s a statement crafted more for the American public than for Central Americans.