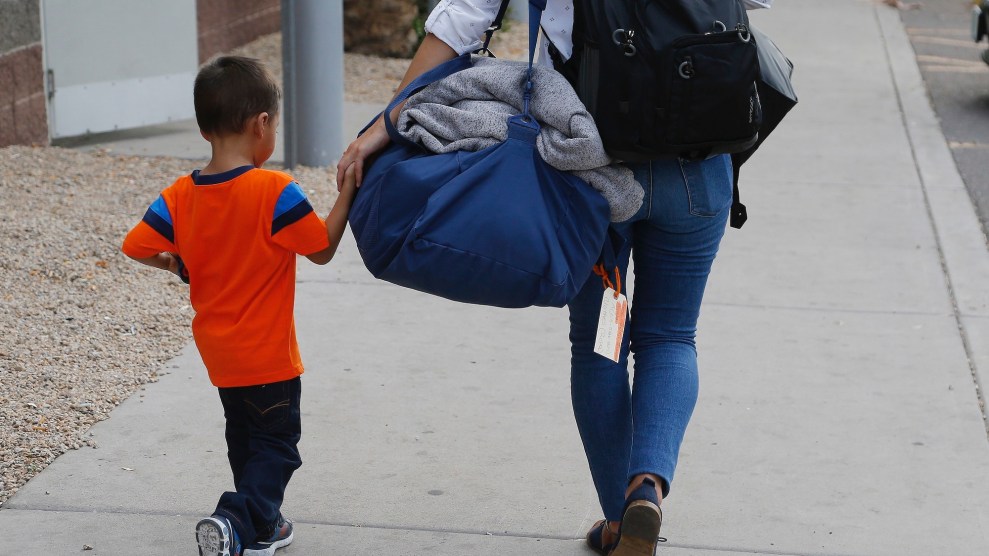 In 2018, three-year-old Jose Jr., from Honduras, is helped by a representative of the Southern Poverty Law Center as he is reunited with his father in Arizona.Ross Franklin/AP

Over the course of the Trump administration, the Department of Homeland Security separated more than 5,500 families at the US-Mexico border. More than 1,000 of those families remain separated because DHS deported parents without their kids. On Sunday, DHS Secretary Alejandro Mayorkas announced that the Biden administration is beginning to reunite those families in the United States.

Mayorkas told reporters that the Biden administration is starting by allowing four parents to return to the country early this week. “The first families reuniting this week are mothers. They are sons. They are daughters,” Mayorkas said. “They are children who were three years old at the time of separation. They are teenagers who have had to live without their parent during their most formative years. They are mothers who’ve fled extremely dangerous situations in their home countries.”

When other separated families can expect to be reunited remains unclear. In response to a question about the timeline for future reunifications, a DHS spokesperson told me that the family reunification task force established by President Joe Biden in February is working as “swiftly as possible.” The New York Times, citing two unnamed administration sources, reported that another 30 parents are expected to come to the United States within the next 30 to 60 days. That would leave the vast majority of parents who are eligible for reunification still separated more than six months into Biden’s presidency.

Mayorkas provided only general information about the families being reunited this week in order to protect their privacy. Two of the mothers, from Honduras and Mexico, were separated from their children in late 2017—months before the Trump administration officially began its family separation policy along the entire Mexican border in 2018. At the time, some families were separated under a pilot version of the family separation program, while other were split up because of Custom and Border Protection’s often arbitrary decisions to separate families when it believes doing so is in a child’s best interest.

The four parents being reunited have been waiting in Mexico with support from Al Otro Lado, an immigrant advocacy group based in California and Baja California. Carol Anne Donohoe, managing attorney of the organization’s family reunification project, told NBC News that the Biden administration did little to bring the four parents back together with their children. “DHS has done nothing to facilitate the return and reunification of these parents this week, other than to agree to allow them in,” Donohoe said. “The only reason these mothers will be standing at the port of entry is because Al Otro Lado negotiated their travel visas with the Mexican government, paid for their airline tickets, and arranged for reunification.”

Michelle Brané, a longtime advocate for migrant women and children who now serves as the executive director of the reunification task force, said on Sunday that separated parents will enter the United States via “humanitarian parole,” which allows people to come to the United States on a temporary basis. She added that the task force is looking at ways to provide parents with longer-term statuses in the country.

Donohoe stressed that Al Otro Lado represents more than 30 separated parents who have been ready to return to the United States since the start of the Biden administration. “There is no reason, other than lack of political will, for DHS to make these families undergo even one more day of separation and torture,” she said.

Last month, I wrote about Magdalena Hernández Pérez, one of the parents who remain separated after being deported alone. Like at least two of the mothers returning this week, she was separated from her children in late 2017. The two daughters she was split apart from were 16 and 9 years old at the time.

Hernández and I met by chance while I was reporting from Guatemala during the summer of 2019. “For the past three years, it’s felt like they killed me,” she said during one of our conversations earlier this year. “Because I haven’t been able to be close to my little girl.” She is ready to return to the United States as soon as the government lets her.

Mental health professionals I spoke to for the story about Hernández emphasized the need to move as quickly as possible to reunite families. Brenda Punsky, a clinical social worker at Terra Firma, a New York–based organization that assists immigrant children through advocacy and direct services, has worked with many families who were reunited after weeks or months because the parents weren’t deported. “I will say that every day that passes by without them being reunited adds to the trauma,” Punsky told me. “Every single day.”