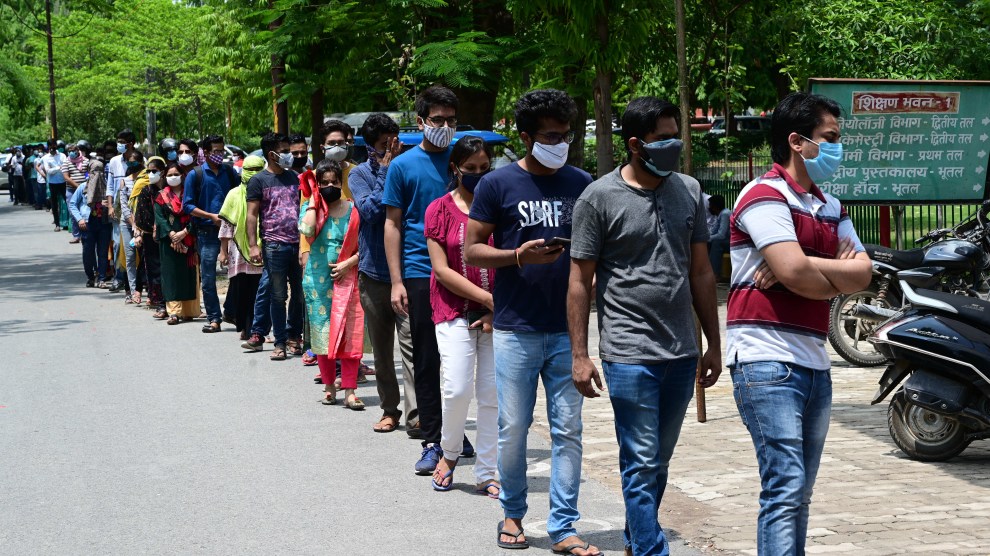 Prayagraj, Uttar Pradesh, India: Beneficiaries in a long queue to receive a dose of a COVID-19 vaccine at a vaccination centre on Friday, May 21, 2021. Prabhat Kumar Verma/Zuma

The United States is slowly emerging from the onslaught of the pandemic, but in India, COVID-19 is raging. Bodies are washing up on the shores of the sacred Ganges river. Thousands of medical workers have died of the virus. The daily death toll, at more than 4,500, is now the highest in the world, surpassing the previous record set by the United States. That’s just the official count—the actual number of deaths is likely much higher. A particularly contagious variant now dominates, vaccines are still in short supply, and there is no end to this misery in sight.

“India is a bellwether for other big outbreaks we’re going to see in other places all around the world.”

As my colleague Sinduja Rangarajan recently wrote, India’s swiftly intensifying COVID crisis came as a surprise. Just a few months ago, the country seemed to have escaped largely unscathed. In February, the physician and author Siddhartha Mukherjee wrote in the New Yorker about possible explanations for India’s good fortune. Some public health experts theorized that India dodged the nursing-home outbreaks that drove many US clusters because elderly people there tended to live with their families. Others told him that maybe Indian immune systems, which are exposed to different pathogens from those in the West, might have had an edge in warding off even novel infections like the coronavirus.

Unfortunately, it turned out that none of these early hypotheses held up. Now, it seems more likely that the public health emergency in India was only a question of timing; the virus simply ramped up there later than it did in the West. But this sequence of events worries infectious disease experts, some of whom had previously speculated that much of the developing world would be spared the worst of COVID-19, the way India seemed to have been, for many of the same theoretical reasons. Now, they’re wondering where in the world the virus will surge next.

“Is Lagos going to have a massive outbreak, and are we going to see a resurgence in Johannesburg?” says Craig Spencer, an emergency medicine physician at Columbia University Medical Center who has worked extensively in infectious disease in Africa. “I don’t think anyone really knows.” But as long as vaccines aren’t widely available, Spencer expects the virus to persist: “India is a bellwether for other big outbreaks we’re going to see in other places all around the world.”

In some ways, African nations may be better equipped even than Western countries to deal with a nascent outbreak, because many of them had scaled up their public health systems during the Ebola crisis six years ago. As the pandemic was just beginning, Senegal was testing for COVID-19 at rates that far exceeded those in the United States. But a surge on the scale of the one taking place in India would quickly overwhelm most countries in the developing world. “I’m thinking of my friends in Burundi,” said Spencer. “I think we have more ventilators in my emergency department than there are in the whole country of Burundi.”

It’s important to keep in mind that the virus may already be beginning to surge in some African population centers, but in many of these places disease surveillance is limited. Nahid Bhadelia, an infectious disease specialist at Boston Medical Center who also directs clinics and research in Africa, said that poor surveillance may have played a role in India where some early reports suggested that certain areas may have reached herd immunity from mild infections. As it turned out, those samples may not have been collected widely enough to be accurate. In places where public health surveys are hard to conduct, public health officials must look to other metrics—like the demand for coffins—for hints of how widely a disease is spreading and how many lives it’s claiming. The New York Times reported in January that Nigerian undertakers noted a dramatic uptick in business last summer.

Spencer and other international disease experts are keeping a close eye on Nigeria, whose capital, Lagos, is a densely packed city of nearly 15 million. So far, Nigeria has registered just 2,067 deaths from COVID-19, about the same number as the state of Idaho. Thus far, the relatively mild nature of the pandemic in Nigeria could be a result of its relative isolation: There are just a few flights a day between Lagos and Europe, says Bhadelia. So it’s possible that the virus simply hasn’t gained traction there yet.

But there’s another possibility: The virus could be going undetected in Nigeria and other demographically similar nations, because its symptoms are milder in much-younger populations. The median age in Nigeria is 18, compared to 38 in the United States. Fewer Nigerians than Americans suffer from chronic conditions like diabetes and heart disease. India is becoming more like the United States: Its median age is about 29, and people are beginning to live longer and suffer from chronic illness. We don’t know “if it’s actually age—and maybe medical conditions—that make a population more vulnerable,” says Bhadelia.

In the end, both Bhadelia and Spencer agree that the severity of future outbreaks in the developing world will depend on the success of global vaccination campaigns—in part because the longer the virus lingers in a vulnerable population, the more chance it has to develop more transmissible variants. There’s another reason that the crisis in India may directly affect the course of the virus in other parts of the world. Bhadelia notes that the country had to pause its vaccine exports that would have accounted for hundreds of millions of doses. This means that countries that were counting on India to supply vaccines—specifically, the AstraZeneca shots—may have to wait longer to vaccinate their populations, giving the virus more opportunities to spread and change.

When I spoke to Bhadelia last summer, when the infection rates in the US were soaring, she emphasized that infectious disease is always a global problem. Of course, wealthier nations should help poor countries control outbreaks, partly because it’s the right thing to do. But also because outbreaks don’t stay neatly within borders; what seems like a distant problem could soon become a local catastrophe here in the US. There are still “states where huge numbers of people are unvaccinated,” Bhadelia says. “It’s a concern for everybody.”