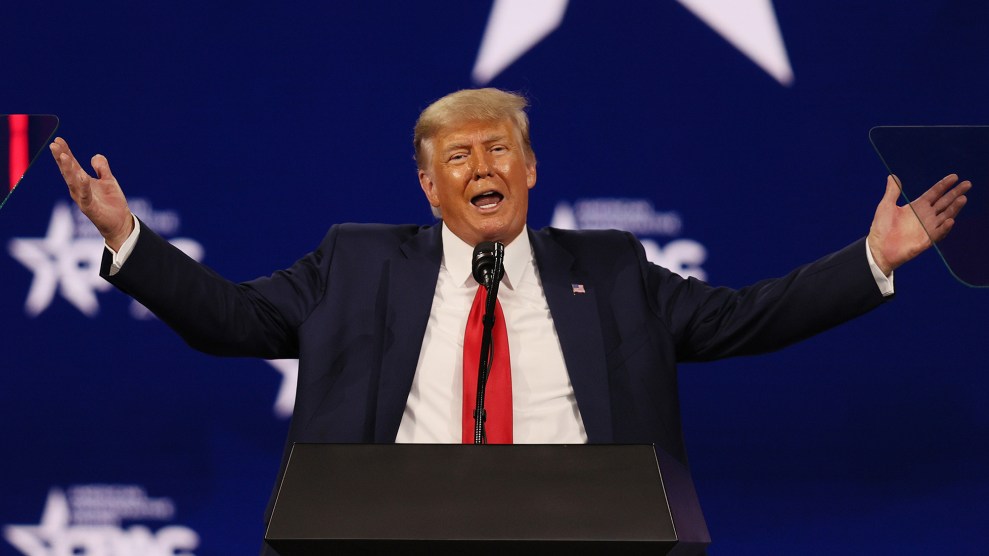 Former President Donald Trump cannot resume posting to Facebook and Instagram, following a long-awaited decision by Facebook’s new Oversight Board. But the board, formed and appointed by Facebook itself, asked Facebook to make the ultimate decision on whether to let Trump back on the platform, ceding back full control to the company over a content moderation process that’s been accused of undermining democracy and civil rights.

Facebook indefinitely halted Trump’s ability to post content after he incited the violent January 6 attack on the US Capitol, including through his posts to the platform. It then asked the Oversight Board to review that decision. On Wednesday, the Board upheld the suspension but punted on the issue of whether to make that suspension permanent, sending the decision back to Facebook and leaving open the possibility that Trump will return to the platform later this year.

The board found that Trump’s posts on January 6 praising the rioters “severely violated” Facebook’s rules against praise for people engaged in violence. It also found that Trump’s many false posts about election fraud leading up to January 6 “created an environment where a serious risk of violence was possible.”

But it did not conclude that this dangerous situation should result in a permanent ban. Instead, it argued that Trump’s indefinite suspension did not follow the company’s rules, which include both temporary suspensions and permanent bans—not indefinite ones.

“In applying a vague, standardless penalty and then referring this case to the Board to resolve, Facebook seeks to avoid its responsibilities,” the board stated. “The Board declines Facebook’s request and insists that Facebook apply and justify a defined penalty.” The board gave Facebook six months to determine Trump’s punishment. In response, Facebook agreed to reconsider Trump’s ban.

The decision to send the ultimate decision back to Facebook simply lengthens what many of Facebook’s critics believe is ultimately a sideshow: an important case that sucks up all the attention while Facebook continues to host and spread dangerous, destabilizing content around the world.

“In applying a vague, standardless penalty and then referring this case to the Board to resolve, Facebook seeks to avoid its responsibilities,” the board stated.

“This is a distraction from the fact that Facebook on a repeated basis is letting tons of other liars and haters run rampant on its site,” Jessica González, co-CEO of the digital rights group Free Press and a critic of Facebook and the Oversight Board, said on Tuesday as she awaited the board’s decision. “I’m frankly offended that we have to spend so much time on this sideshow. It’s an important sideshow because Trump shouldn’t go back up, but it’s a sideshow.” Now, that sideshow will continue at least another six months.

A group called the Real Facebook Oversight Board, a coalition of Facebook critics that called for Trump to remain off the platform, said in a statement that Wednesday’s decision proves the uselessness of the board. “This muddled ruling…reveals the Oversight Board as an empty suit…which took nearly four months to reach a partial ruling that does nothing to fundamentally challenge Facebook’s business model or approach to content,” the group said in a statement.

The result is also a letdown for civil rights advocates who continue to fear Trump’s return to the platform. “We are extremely concerned that the Board’s decision leaves the door open for Facebook to let Trump back on the platform in six months—an unacceptable and dangerous outcome,” Madihha Ahussain, Muslim Advocates’ special counsel for anti-Muslim bigotry, said in a statement. “Letting Donald Trump back on Facebook will hurt Muslims. Donald Trump has used Facebook to spread hate and conspiracies about Muslims and immigrants and to amplify anti-Muslim white nationalists.”

The board issued several recommendations urging Facebook to better police dangerous content from world leaders and other influential Facebook users, but it’s up to Facebook whether to adopt those recommendations. This again reinforces the fact that this case has taken up four months of media attention without anything concrete actually happening and raises questions about why such a consequential decision for the entire globe placed on the board’s shoulders.

Facebook created the Oversight Board in an attempt to shift a handful of content moderation questions onto an outside body. It began issuing its first decisions in January. Paid for by Facebook through a trust, the board has become an object of obsession and debate, an experiment in corporate self-regulation, and a de facto free speech arbiter of the internet. To Facebook’s critics, this is a problem: The board is a distraction from Facebook’s own failings and lacks the power to reform the company. The Trump decision is a consequential example of this—a point exacerbated by the board’s unwillingness to make a final ruling Wednesday.

“This is a distraction from the fact that Facebook on a repeated basis is letting tons of other liars and haters run rampant on its site.”

Many of the board’s current members are lawyers and human rights experts from around the world. It’s an august body to decide what in many ways is a simple situation. “In the instance of Trump, it’s not a hard case,” says González. “One in four of his posts last year contained either extremist content or outright lies [according to an analysis by left-leaning watchdog Media Matters]. So clearly, in regular violation of Facebook’s Terms of Service, if he was anyone other than a world leader, he would have been off the platform long ago.”

But Facebook CEO Mark Zuckerberg didn’t want to boot Trump. For years, Facebook looked the other way, made excuses for the president, and even changed its policies to accommodate him. In 2019, Facebook announced that it would now include politicians’ posts and ads under its “newsworthiness” policy, exempting them from independent fact-checking. The idea, shared by some free speech advocates, was that people should hear what politicians have to say, and that Facebook shouldn’t be in the business of silencing political leaders. Yet the policy had the perverse effect of letting the most powerful people post some of the most dangerous content—and that in itself, civil rights advocates have argued, is a perversion of free speech as a protection from those in power, not a means to protect the powerful.

By ultimately passing Trump’s fate on the platform off to the Oversight Board, Facebook tried to offload a problem that it had created—and not just by allowing Trump to stay on the platform with little consequence until January 6. As Facebook’s critics point out, a business model of growth at any cost had led to the spread of extremism on the platform. Its policy decisions and algorithms, aimed at increasing engagement, have caused people to see more extreme content in their feeds, and in many cases pushed users into extremist groups. All of this contributes to Trump’s toxicity on the platform, yet none of it is within the Oversight Board’s purview.

In fact, the board stated in its decision that Facebook had refused to answer several questions that would shed critical light on the company’s own culpability for the January 6 riot and its role in amplifying Trump’s dangerous messages. “The questions that Facebook did not answer included questions about how Facebook’s news feed and other features impacted the visibility of Mr. Trump’s content; whether Facebook has researched, or plans to research, those design decisions in relation to the events of January 6, 2021; and information about violating content from followers of Mr. Trump’s accounts,” the decision states.

For years, Trump used Facebook to malign Muslims and immigrants, threaten Black Lives Matter protesters with violence, spread anti-Asian hate, promote disinformation about the COVID-19, and finally destabilize faith in US elections in an attempt to overturn his electoral loss and stay in power. Repeatedly, the culmination of his rhetoric on and off of social media has been violence—including the attempted coup at the Capitol. Despite apprehension about corporate censorship, this history led many scholars and advocates to argue that keeping Trump off the platform is the only responsible way forward. Lifting Trump’s ban “set a precedent of valuing political elites’ expression over the right of the public to self-govern,” media scholars Daniel Kreiss and Shannon McGregor warned recently in Wired.

“The board puts a really heavy focus on forward-looking, prospective likelihood of future harm,” says David Brody, senior counsel for the Lawyers’ Committee for Civil Rights Under Law and leads its Digital Justice Initiative, reflecting on the board’s decision. “A ban on trump has to evaluate the full scope of the harms he has caused, and the hate and racism that he has promoted. It can’t just be, ‘OK, we put you in timeout, don’t do it again.”

But the board ultimately punted that decision back to Facebook—and Facebook will do what it wants, and what is best for its bottom line.