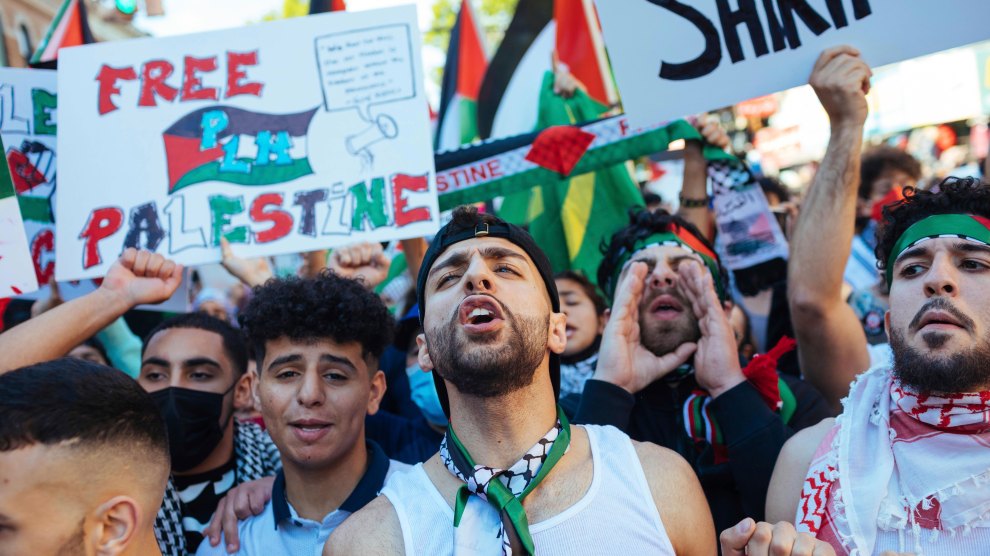 When President Joe Biden told reporters last week that Israel, in the midst of a brutal conflict with Palestinians in Gaza, had a right to “defend itself,” the sharpest criticism came from members of his own party.

On Twitter, Rep. Alexandria Ocasio-Cortez said Biden was reinforcing the “false idea that Palestinians instigated this cycle of violence” and taking “the side of occupation.”

By only stepping in to name Hamas’ actions – which are condemnable – & refusing to acknowledge the rights of Palestinians, Biden reinforces the false idea that Palestinians instigated this cycle of violence.

This is not neutral language. It takes a side – the side of occupation.

Her remarks condemned the militant Palestinian group Hamas, but went further than Democratic leadership in blaming Israel for the region’s vicious circle of violence. Like Biden, Speaker of the House Nancy Pelosi (D-Calif.) said Israel “has the right to defend” itself.

That common refrain, which privileges the Israeli government’s image of the conflict as a nation-state defending itself from terrorism, has become a flashpoint in the ongoing debate over Biden’s foreign policy and the views of Democrats writ large.

To antiwar progressives—who have become more of a vocal force in Democratic debates about foreign policy—the line is a rhetorical crutch that avoids centering the experience of Palestinians. “No one is arguing that Israel, or any government, does not have the right to self-defense or to protect its people,” Sen. Bernie Sanders (I-Vt.) wrote in a New York Times op-ed on Friday. “So why are these words repeated year after year, war after war? And why is the question almost never asked: ‘What are the rights of the Palestinian people?'”

Sen. Bernie Sanders: “Why is the question almost never asked: ‘What are the rights of the Palestinian people?'”

Ocasio-Cortez and Sanders represent a small but growing portion of the Democratic caucus that no longer considers reflexive support of Israeli’s right-wing government a necessary part of US foreign policy. “In the Middle East, where we provide nearly $4 billion a year in aid to Israel, we can no longer be apologists for the right-wing Netanyahu government and its undemocratic and racist behavior,” Sanders wrote.

More Democrats are getting comfortable making that case directly to the Biden administration. Earlier this week, 25 House Democrats, including Ocasio-Cortez, called on Secretary of State Antony Blinken to condemn Israel’s planned eviction of nearly 2,000 Palestinians from East Jerusalem. “I don’t think that Netanyahu or US politicians realize how acutely focused the world is on what’s happening in Gaza right now, and how much damage is being done to Israel’s standing,” former Obama national security official Tommy Vietor tweeted on Saturday, adding, “the politics are moving beneath our feet.”

The Israeli-Palestinian conflict is far from the first—or only—issue that has progressives at odds with Biden’s more traditional foreign policy. His promise to withdraw troops from Afghanistan by September and decision to stop some support for Saudi Arabia’s war in Yemen pleased progressives. But on other issues, Biden has been out of step with his party’s left flank.

In February, human rights activists were outraged when the Biden administration approved a weapons sale to Egypt only days after President Abdel Fattah el-Sisi’s government arrested relatives of an Egyptian American activist, part of a systemic campaign of intimidation against critics of el-Sisi’s repressive regime. Two months later, the Biden administration announced plans for $715 billion in defense spending that snubbed progressive hopes for a slimmer Pentagon budget.

Even on Iran, a topic where Democrats had been nearly unanimous in opposition to Donald Trump’s hawkish policy, Biden has angered progressives by proceeding slowly in negotiations with the country over a return to the 2015 nuclear deal, and by not offering upfront sanctions relief.

The backlash from progressives is only expected to continue as Congress readies a bipartisan China policy bill that antiwar groups have criticized as unnecessarily hawkish. The Biden administration has made no secret of its desire to pivot the US national security focus away from the Middle East and toward China, which Secretary of State Antony Blinken called the “biggest geopolitical test” for the United States.

These issues threaten to destroy the tentative consensus Biden has held together among Democrats since taking office, with his party clinging to narrow control of Congress. The violence in Gaza might be Biden’s first major test of how Democrats can manage a divided caucus—but it certainly won’t be the last.