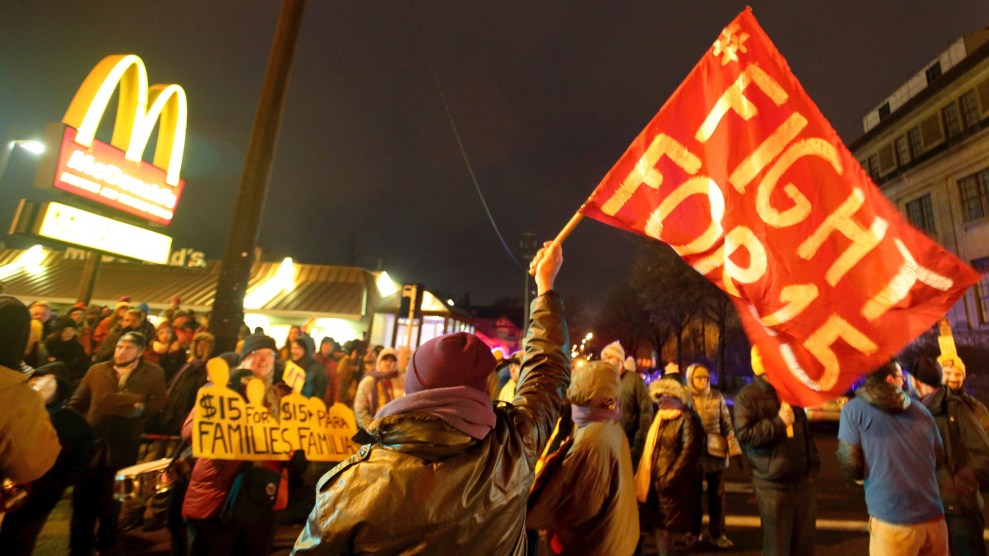 Protesters gather outside a McDonald's restaurant in Minneapolis during a Fight for $15 demonstration in 2016.David Joles/AP

In the past few weeks, McDonald’s outposts have responded to a supposed shortage of workers by offering $50 to anyone who shows up for an interview in Tampa, giving free combo meals to applicants in Central Florida, and offering small raises for workers at the 5 percent of locations that aren’t franchises. Today, McDonald’s workers in 15 cities are striking to demand a longer-term fix: a company-wide $15 minimum wage.

The strikes are backed by Fight for $15, a movement seeking a $15 wage and union rights for low-paid workers that is supported by the Service Employees International Union. The actions are happening one day before McDonald’s annual shareholder meeting. The company made nearly $5 billion last year, which allowed it to increase dividends to shareholders and pay its CEO more than $10 million.

“I plan to go on strike to say to McDonald’s: don’t wait for politicians in Washington to pay us what we need to survive,” Hakim Dumkia, a McDonald’s worker in St. Louis, said in a statement. “We supported McDonald’s through the pandemic, and now you need to pay us enough to support our families and our communities.”

Nahshon Blount, a 21-year-old who works at a McDonald’s in Durham, North Carolina, is also striking today. Blount told me he sees the strike as a chance to tell shareholders to do the right thing by raising pay instead of keeping the money for themselves.

Blount was making $8.50 an hour throughout most of the pandemic before a recent raise to $9.20 an hour, which means he’ll take home about $1,200 a month for full-time work. He gets no health insurance, sick days, or paid vacation. The franchise Blount works at has been short-staffed, which he believes would change if the owner paid workers at least $15.

He’d participated in an earlier strike, in December 2020, because he felt McDonald’s wasn’t doing enough to protect its workers from COVID-19. His decision to do so was a reflection of how much more dangerous and difficult food service jobs became during the pandemic. Yet wages in the leisure and hospitality sector, which includes restaurants, have only just gotten back to where they would have been had pre-COVID economic trends continued. Blount hopes to become a doctor, but can’t afford to take college courses with what he makes now.

McDonald’s recently announced it would increase wages by an average of 10 percent at the small minority of restaurants it runs directly. That will raise starting pay to $11 to $17 an hour, depending on the location.

Sen. Bernie Sanders (I-Vt.) and Rep. Alexandria Ocasio-Cortez (D-N.Y.) addressed the strikers today via Facebook Live. “You are doing exactly what you need to do to not only raise wages and create dignified work for yourself,” Ocasio-Cortez said. “But, frankly, you’re doing this for the entire industry. You are inspiring workers across the country.”

Throughout the 1950s and 1960s, workers’ pay increased in line with productivity gains. But that stopped as the power of organized labor declined and US policy grew more friendly to owners and shareholders. The minimum wage would be more than $24 today if it had kept up with productivity.

The ability of McDonald’s and other companies to hire workers at such deflated rates is a sign of desperation in today’s economy. Republican governors see things differently. They’ve responded to reports of labor shortages, largely in one industry—food service—by cutting off extra pandemic-era unemployment insurance.

As Heidi Shierholz, the policy director and a senior economist at the progressive Economic Policy Institute, has explained, it’s a decision that makes no economic sense. The goal is to force people back into the workforce, even though there’s little evidence that unemployment insurance was behind last month’s disappointing job numbers.

In doing so, the governors may hurt their economies overall. But for them it’s the cost of addressing what they see as a crisis: workers with the leverage to make companies pay something closer to a living wage.