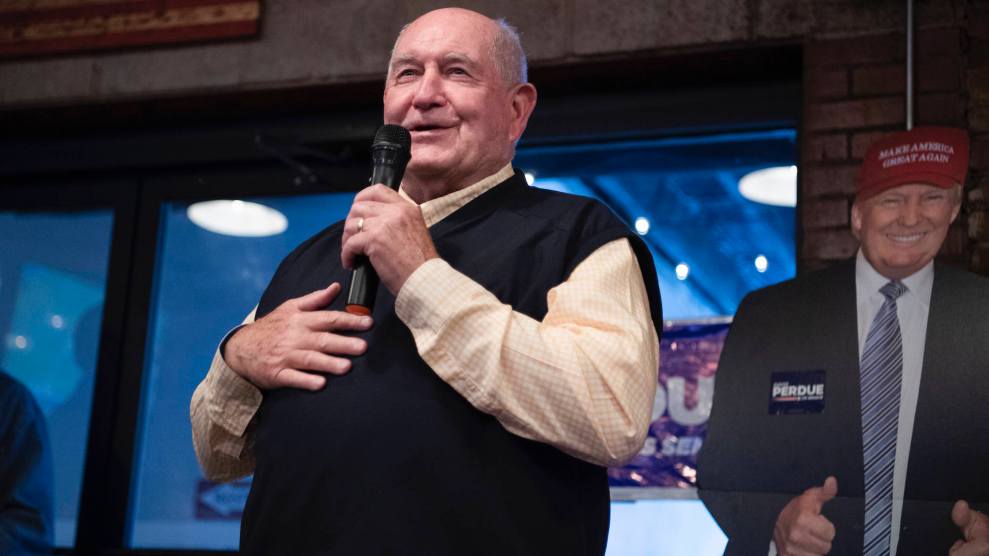 Sonny Perdue, Donald Trump’s loyal-till-the-end agriculture secretary, could use a new job. Georgia’s sprawling public university system needs a new chancellor. The University System of Georgia’s 19-member Board of Regents may be on the verge of resolving these two situations in one go: Perdue is reportedly a contender for the top post.

But he won’t be appointed without a fight. Students and faculty are organizing to oppose him, for reasons including Perdue’s utter lack of experience in university management, his proud embrace of climate change denial, and his record of using his power to tamp down independent research by public scientists.

“Sonny Perdue might be the least prepared potential university leader I’ve seen in my life.”

“Sonny Perdue might be the least distinguished, least prepared potential university leader I’ve seen in my life,” says Siva Vaidhyanathan, professor of media studies at the University of Virginia and a longtime observer of university governance politics.

The chancellorship—which as of 2020 carried an annual salary of $523,949—would certainly be a reputation-laundering perch for a career politician and agribusinessman tainted by his association with a disgraced former president. The University System of Georgia is one of the state’s most vital public assets. It enrolls more than 340,000 students and houses 26 schools, including major research institutions the University of Georgia and Georgia Tech and three historically Black universities: Savannah State, Albany State, and Fort Valley State. The chancellor acts as the system’s executive director and its chief lobbyist, representing the interests of these schools and their students before the legislature and the public.

Back in March, the Atlanta Journal-Constitution reported that Perdue was “under serious consideration” for the chancellorship, citing “five people with direct knowledge” of the proceedings. (The Board of Regents has not gone on the record to divulge candidates for the job, and Perdue has remained silent as well. )

Ever since the news story broke, the GSA Board of Regents’ closed-door hiring process has plunged into chaos. A group called Students Against Sonny organized an online petition, which has so far drawn nearly 1,500 signers, to oppose the hiring. “He is completely inexperienced in education, and this appointment—though it shouldn’t be—is blatantly political,” the position states.

The regents seemed to have gotten the message: On April 22, they paused the search for chancellor, declaring in a statement, “We value the input received from faculty, staff, students, and community leaders throughout this process and want to ensure we meet the expectations of this challenging, yet critically important time in higher education.” Two weeks later, the AJC reported that the search firm hired by the regents to help choose the new chancellor had abruptly quit, citing unspecified “misinformation” from the board as the reason.

A May 11 board meeting brought another twist: The regents announced they had reopened the search, but gave no information about leading candidates. According to an AJC dispatch on the meeting, Perdue remains in the running, but has divided the board.

Decisions about who leads the University of Georgia System are deeply embedded in electoral politics. The governor appoints the regents responsible for hiring the chancellor, and although they formally choose the chancellor, the state’s sitting governor typically makes the call, says Matthew Boedy, an associate professor of English at the University of North Georgia and president of the Georgia branch of the American Association of University Professors (AAUP). Gov. Brian Kemp appointed 5 of 19 regents now serving; the rest were tapped by previous governors. And Perdue himself retains ties to the board from his time as governor. One member, surgeon C. Thomas Hopkins, was originally appointed to the board by then-Gov. Perdue in 2010. Another regent, Christian school principal Erin Hames, served as policy director of the Georgia department of education under Perdue.

“Each governor basically chooses their own chancellor, even though the board is [nominally] independent,” Boedy says. “It’s well known that the governor will get who he wants, whether he proposes a name or whether his allies propose a name.”

Which could bode well for Perdue, who has long served as a political patron of Kemp’s. Back in 2010, at the end of Perdue’s stint as governor, he appointed Kemp as Georgia’s secretary of state—a normally elected position that had been vacated. The move boosted Kemp’s bid to win the election for a four-year term as secretary of state, a position he ultimately won twice and held through 2018.

That year, when Kemp was locked in a tight Republican primary in a bid for governor, Perdue evidently again rose to Kemp’s aid. In the heat of the race, then-President Donald Trump endorsed Kemp on Twitter, which helped Kemp claim the nomination in a landslide. Trump later told the Daily Caller, “I did that for Sonny Perdue.” Kemp would narrowly beat Democrat Stacy Abrams for the governorship, infamously aided by his own management of the voting process as secretary of state, as my colleague Ari Berman showed.

Meanwhile, Kemp’s relationship with Trump has unraveled—the former president now despises the Georgia governor for declining to submit to Trump’s demands to nullify Georgia’s 2020 presidential results. Trump has vowed to campaign against Kemp when he’s up for reelection in 2022. Might Kemp be pushing Perdue, a committed Trump ally, to help win back the graces of the former president and the “Stop the Steal” Georgia Republicans who still adore him? Such speculation swirls in Georgia academic circles, but is impossible to confirm, because none of the principals will speak on the record.

What would a public university system represented by Perdue look like? Though he’s never held the job, his past record offers some clues. In a blockbuster 2019 Politico piece, Helena Bottemiller Evich showed that under Perdue’s leadership, the USDA “refused to publicize dozens of government-funded studies that carry warnings about the effects of climate change, defying a longstanding practice of touting such findings by the Agriculture Department’s acclaimed in-house scientists.” Later interviewed about the article by CNN, Perdue waxed skeptical about the reality of climate change. “You know, I think it’s weather patterns, frankly,” he told the network. “And you know, and they change, as I said. It rained yesterday, it’s a nice pretty day today. So the climate does change in short increments and in long increments.” He also falsely denied the consensus that human-triggered greenhouse gas emissions drive climate change, insisting that “many scientists believe that it’s human caused, other scientists believe it’s not.”

As ag secretary, Perdue also effectively gutted the USDA’s Economic Research Service—a group of economists devoted to studying the US food system—by abruptly deciding to move its offices from Washington, DC, to Kansas City. “Economists in the Agriculture Department’s research branch say the Trump administration is retaliating against them for publishing reports that shed negative light on White House policies, spurring an exodus that included six of them quitting the department on a single day in late April,” Politico reported in May 2019. The move triggered a mass exodus of economists from the ERS and throttled morale.

Then there’s his record of pushing policies that harm low-income people—the very group who should benefit most from robust public education. Undeterred by the pandemic-led spike in hunger last year, Perdue maintained pursuit of a long-held goal: boosting work requirements for the Supplemental Nutrition Assistance Program. A 2018 bill would have eliminated food aid for as many as 2 million people, about a third of them households containing senior citizens, nearly a quarter with children, and 11 percent with a disabled person, while 700,000 were at risk under Trump’s proposed budget for 2021.

He also set his sights on cutting wages for immigrant farm workers, not relenting even when the coronavirus raged. Similarly, while the pandemic savaged meatpacking workers, killing hundreds, the ag department kept on with a trend it had started in 2019: allowing giant poultry companies to speed up their slaughterhouse kill lines, making social distancing ever-harder for workers. As governor, Perdue promoted policies that made life miserable for immigrants, enacted a severe voter-suppression law, and waxed nostalgic for the Confederacy.

One of the most important functions of a public university system chancellor is to “increase access to all of the resources and opportunities the university offers,” says the University of Virginia’s Vaidhyanathan. “Purdue has a long record of closing off access and opportunity to people without means—and I can’t expect that he is going to shift his tone and his values, just because he has this new set of obligations running a state university system.”