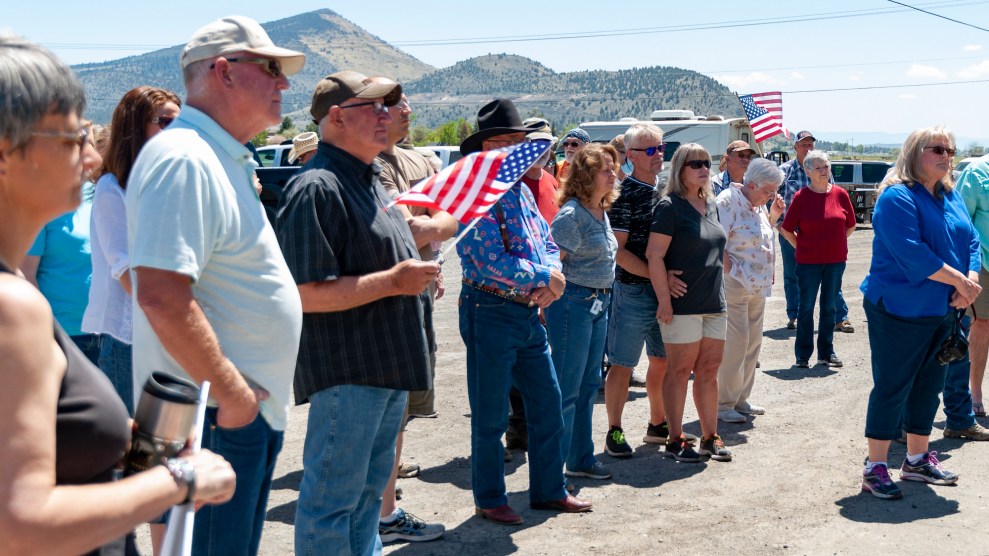 A group of roughly 30 people affiliated with People's Rights Oregon gathered in May at Klamath Irrigation District headquarters in Klamath Falls, Ore., to protest after federal regulators shut off irrigation water to farmers from a critical reservoir due to drought conditions. Alex Schwartz/The Herald and News via AP

Far-right agitators and militia groups have been gravitating to southern Oregon over the past few weeks, threatening an armed staredown with the federal government over water supplies that are seriously depleted because of a massive drought. In what could amount to the first modern climate-driven standoff in the US, some farmers in the Klamath basin are angry that the Bureau of Reclamation has shut off water to an irrigation canal that feeds 200,000 acres of farmland in southern Oregon to preserve the spawning grounds of endangered suckerfish sacred to local Native tribes.

Organizers affiliated with People’s Rights, a network created by the far-right activist Ammon Bundy, have purchased land next to the irrigation project and created a “water crisis info center” in Klamath Falls, Oregon, where they’ve been threatening to bust open the canal gates to let water flow, setting the stage for a fight over endangered species and Native America rights. The center—essentially a big tent—is supposed to be educating locals about water rights and and raising support for the cause among the locals. But at a meeting on Thursday night, People’s Rights Oregon hosted “motivational speaker” Maggie Rose McGrath, whose expertise on water rights seemed a little thin.

A conspiracy theorist and host of The Concord Show on Revolution Radio, McGrath has been supportive of armed confrontations with the government over the past six years, including an Oath Keeper–led episode at the Sugar Pine gold mine in which militia groups faced off with the Bureau of Land Management over mining claims. McGrath says she was a volunteer nurse at the standoff there. She’s been a Bundy hanger-on at least since 2016, when Ammon Bundy led the armed occupation of the Malheur National Wildlife Refuge. She says she was working as a reporter there when her “friend” LaVoy Finicum was killed by police. She also claims to have been in the courtroom when a judge released Ammon, his father Cliven, and their co-defendants from jail after they’d spent almost two years behind bars awaiting trial on conspiracy and other charges related to the armed standoff at their family ranch in Nevada. That case ended in a mistrial.

McGrath identifies herself as a freelance journalist, but the outlets she writes for fall far outside the mainstream. One, the American Free Press, is a white-nationalist publication that used to be known as The National Spotlight, founded by the Liberty Lobby, a now-defunct group that helped spread Holocaust-denial conspiracy theories. She has written articles for American Free Press defending the January 6 insurrectionists who stormed the US Capitol, an event she has blamed on Antifa and BLM activists.

She starts some of her radio broadcasts with a song from the album “Extremist” by the late Carl Klang, an antisemitic country balladeer who, according to the Institute for Research and Education on Human Rights, was a staple of militia and Christian Identity movement events in the 1990s. A sampling of his lyrics: “I want to be an extremist. I want to join a militia and wear camouflage. I want be an extremist and run around and sing a rabble-rousing rebel song, and sympathize with the skinheads, who realize it was the Jews who did the Germans wrong. I want to be an extremist. I want to get the job done.”

According to KTVL TV in Medford, Oregon, McGrath spent her time at the People’s Rights meeting Thursday talking about the various injustices done to her and people she knows, and then regaling the group with conspiracy theories that sounded like a new version of QAnon. KTVL reports:

She also propagated various unfounded theories of government conspiracy associated with far-right groups. She spoke at length about a certain “107,” which she claimed to be a well-known influencer in conservative circles who she alleged had the money and power to bring former US President Donald Trump back into power.

She also spoke against Oregon Gov. Kate Brown proposing that efforts to recall her from office through signature collection failed because of what she alleges to be government scheming.

She threw support behind former Oregon Rep. Mike Nearman who was expelled from his seat by a unanimous vote from the Oregon House and Senate after a video of him allowing far-right protesters into the Oregon Capitol building surfaced.

McGrath alleged that the “107” figure whose name she said she “was not at liberty” to divulge had informed her that he was working on bringing Nearman back.

The “107” influencer doesn’t seem to have influenced too many followers beyond McGrath, judging from a Google search, but in this era of QAnon insanity, perhaps it’s only a matter of time.

The Klamath Falls area was the site of an earlier armed confrontation with the government during a drought in 2001, and the current drought has raised fears of a repeat that could potentially result in bloodshed. But it’s not clear how people like McGrath are going to draw further support for the farmers, many of whom are applying for federal disaster aid rather than threatening to blow things up. They’ve realized that the water levels are so low in the lake that feeds the irrigation canals that it’s not clear opening the canal would even be enough to save them.