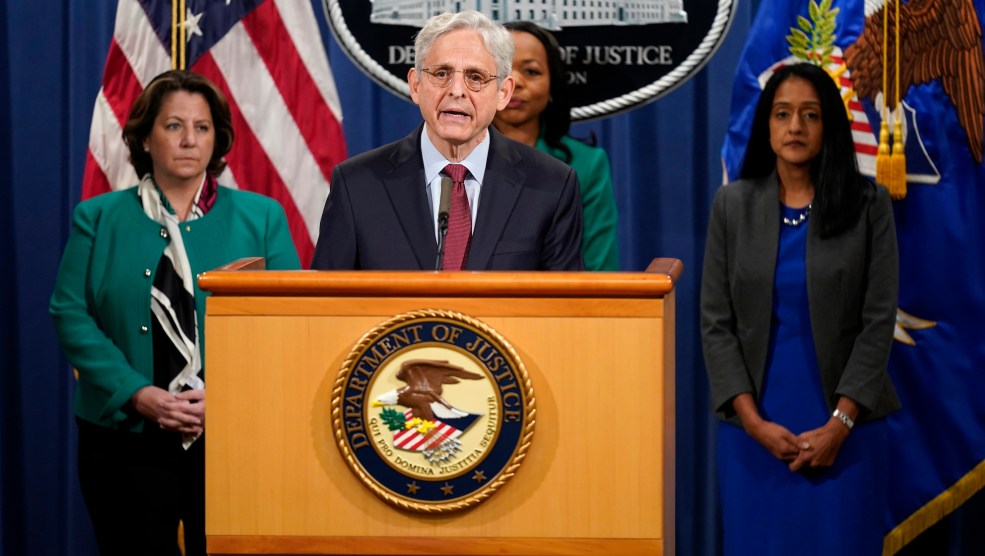 Attorney General Merrick Garland speaks during a news conference on voting rights at the Department of Justice in Washington, June 25, 2021Patrick Semansky/AP

The Biden Justice Department sued the state of Georgia over its new voting restrictions on Friday—the eighth anniversary of the Supreme Court decision gutting the Voting Rights Act, which ruled that states with a long history of discrimination no longer had to approve their voting changes with the federal government. If it’s successful, Georgia could once again be covered under what remains of that landmark law.

The preclearance provision of the VRA blocked 175 proposed voting changes in Georgia from 1965 until 2013. Had it still been in place, the state’s sweeping voter suppression law, passed in March, likely “would have never taken effect,” Attorney General Merrick Garland said at a press conference on Friday announcing the lawsuit.

The Justice Department suit is relying on what remains of the VRA to try to ensure Georgia will once again have to approve its voting changes with the federal government. Specifically, a still-standing section of the law says that states that are found guilty by a court of intentionally discriminating against minority voters can be required to clear their voting changes with the federal government for a period of time.

That’s exactly what happened in Georgia, the Justice Department suit alleges. After Black voters turned out in record numbers to elect Joe Biden president in 2020, and Democrats Raphael Warnock and Jon Ossoff to the Senate, Georgia Republicans targeted the very methods used successfully by Black voters and organizers. “The Georgia General Assembly intended to deny or abridge the right of Black Georgians to vote on account of race or color,” the lawsuit states.

After years of pushing Republican voters to cast mail ballots, the GOP-controlled legislature made it harder to vote by mail only after the Black share of mail voters increased in 2020 and the white share decreased. The new law prevents election officials from sending mail ballot request forms to voters, requires new ID requirements for mail ballots (Black voters represent 56 percent of voters who do not have a driver’s license number associated with their registration, but are only 29 percent of the electorate), and severely cuts the number of mail ballot drop boxes in four metro Atlanta counties with large Black populations—from 111 in 2020 to just over 20 in future elections.

Based on this record of voting discrimination and what officials claim is the clear discriminatory intent of lawmakers, the Justice Department has asked the federal courts to require Georgia to clear “certain new voting changes” with the federal government.

The lawsuit didn’t sit well with Georgia Gov. Brian Kemp, who signed the bill earlier this year behind closed doors, surrounded by six white male Republican lawmakers. On Friday, he accused a “woke mob” at the Justice Department of attacking the state for defending “election integrity,” and linked Major League Baseball’s decision to move the All-Star game from Atlanta to Colorado in protest of the Georgia law as part a broader attack on conservative values.

“They are coming for you next,” Kemp said at a press conference in Savannah. “They’re coming for your state, your ballgame, your election laws, your business, and your way of life.”

Kemp has repeatedly said “there is nothing Jim Crow” about the Georgia law, even though it includes 16 different provisions that make it harder to vote and that target metro Atlanta counties with large Black populations.