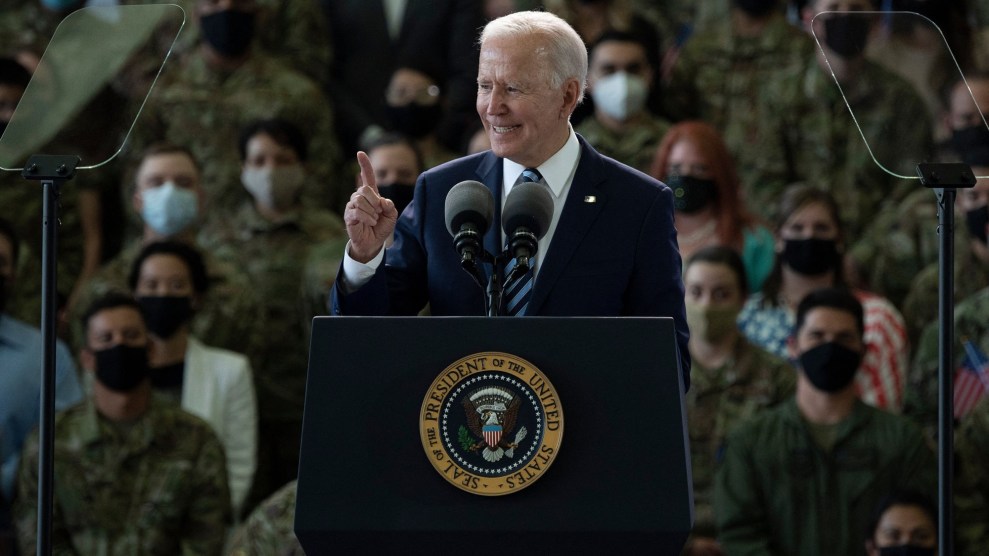 On a Friday in March, nearly 50 years ago, a young Joe Biden stood on the floor of the Senate and challenged the power of a president to unilaterally conduct a forever war. “Time and time again,” he said, “we members of Congress are repeatedly told by the press and presidents that we are incapable of making foreign policy decisions.” But Biden didn’t buy it. Two years earlier, Congress had helped push the United States toward leaving Vietnam. By his 1975 speech, the United States had already evacuated many of its remaining personnel, with a final order to leave coming a month later. Biden hinted at a dark message: If Congress hadn’t intervened, the United States might still be fighting.

That was the danger of a president with too much power.

On Sunday, Biden decided to launch airstrikes at Iranian-backed militias in Iraq and Syria. If that time near the end of a Vietnam War marked a rethinking of the limits of presidential war powers, the prevailing discourse has long since shifted in another direction. The reality is this: Presidents have nearly unfettered power to initiate conflict, Congress be damned. Controversy brewed among lawmakers over Biden’s decision to launch the airstrikes. But he cited his constitutional ability to defend US troops abroad and moved on. “I have that authority under Article II—and even those up on the Hill who are reluctant to acknowledge that have acknowledged that is the case,” he said Monday.

The reality is this: Presidents have nearly unfettered power to initiate conflict, Congress be damned.

Some would argue Article II doesn’t allow an action like Biden took. But the confidence of his statement shows how ineffective national security law can be when characterizing things as seemingly obvious yet ultimately ill-defined as “self-defense” and “war.” If the White House is shameless, the United States can justify military action under any context. In other words, it can enact a war without ever declaring it.

“It’s hard to argue, given the pace of attacks against U.S. troops and, now, the increasing frequency of our responses, this isn’t war,” Sen. Chris Murphy (D-Conn.), a member of the Senate Foreign Relations Committee, told Reuters. “What we always worry about is that the United States slips into war without the American public actually being able to weigh in.”

Under Article II of the Constitution, the president is empowered to defend US troops, but over time, “the Executive Branch has really expanded the scope of what it asserts that self-defense power to encompass,” Steve Pomper, a former Obama National Security Council official, told me. “Now the Executive Branch has gotten into the habit of saying, ‘Our Article II authority allows us to take strikes that send a deterrent message’ or ‘disrupt planning that could contribute to future threats.'”

It is becoming increasingly difficult to explain away this intermittent fighting as isolated acts of self-defense.

It is becoming increasingly difficult to explain away this intermittent fighting as isolated acts of self-defense. Since Trump took office, the constant saber-rattling with Iran has edged closer to actual war. Last year, his decision to assassinate Iranian Gen. Qassem Soleimani caused Iran to fire rockets at a base in Iraq harboring US troops. Nearly three-dozen troops were diagnosed with traumatic brain injuries from the attack.

This time around, Biden’s strikes have provoked a similar tit-for-tat response with these militias. Hashd Al-Shaabi, one of the groups targeted in the attack, said four of its members were killed and vowed Monday to “wreak vengeance on the perpetrators of this heinous crime.” That night, US troops in Syria came under “rocket fire,” the Wall Street Journal reported. US officials pinned the blame on Iranian-backed militants, furthering another round of reprisals that appear destined to extend the US presence in the Middle East indefinitely.

It’s all a self-fulfilling cycle that has its roots in the disastrous US interventions following 9/11. Congress passed an authorization for use of military force (an “AUMF”) in 2001, which applied to al-Qaeda. The following year, Congress passed another AUMF that gave Bush’s administration permission to invade Iraq. But both provisions have been stretched well past their initial context. The Obama administration strained logic to say the 2001 authorization applied to “successor” groups like the Islamic State. And while the United States ousted Saddam Hussein quickly and ended the Iraq War years ago, Barack Obama still justified his continued campaign against the Islamic State by citing the 2002 authorization for use of military force. (An irony: Iraq is now a US ally, making the 2002 authorization—which treats Iraq as an adversary—even more outdated.)

After all this, Trump then used both authorizations for his own interventions. So in sum, the United States invaded Iraq to topple Hussein, returned to fight the Islamic State, and now continues to fight Iran-linked militias like Hashd Al-Shaabi that helped fight back against ISIS.

A resurgent movement among Democratic lawmakers to rein in war powers is challenging these broad interpretations of presidential power. Biden’s own agenda calls for changing this, too. He has already come out in support of House Democrats’ push to repeal the 2002 AUMF, which passed the House earlier this month.

This would seem in line with Biden’s 1975 speech, if a contrast to his more recent actions. But the truth is, Biden has never really been consistent in his approach to war powers. While he noted early on as a lawmaker that Congress had become hopelessly sidelined in the intra-government fight over war powers, by 1988 he had unveiled a plan to expand presidential war powers. That year, he co-authored a Georgetown Law Journal article calling for more instances where a president can act without congressional approval, including in response “to a foreign military threat that severely and directly jeopardizes the supreme national interests of the United States.”

The real driver in Biden’s view instead seems his feelings about the individual conflicts in question—not any overriding philosophy. “When it’s a use of force that he is in favor of, then suddenly he decides the president has all the power in the world,” Patrick Hulme, a political science Ph.D student at the University of California, San Diego, who has written about Biden’s evolving war powers views, told me. “When it’s a use of force that he’s against for whatever policy reason, then suddenly the war powers become sacrosanct again.”

While campaigning for president in 2008, Biden went as far as to say Bush had “no authority to unilaterally attack Iran” and threatened to “move to impeach him” if he did so. When Obama took office, his advisers “looked with some horror at the breadth of the claims that the Bush administration had made under Article II,” Pomper said. Still, the administration leaned on the 2001 and 2002 authorizations and disregarded Congress when it suited their needs. (Obama famously chose not to seek permission from Congress before intervening in the Libyan civil war; the Republican-led House at the time voted against authorizing it.)

Biden went as far as to say Bush had “no authority to unilaterally attack Iran” and threatened to “move to impeach him” if he did so.

After Trump’s near-conflict with Iran reignited the war powers debate in Congress, Biden faces a political environment that is more hostile to the use of decades-old congressional authorizations to justify conflict with different adversaries in the Middle East. Under Obama, “there was a real effort to try and rely on the 2001 AUMF as much as possible as a sort of wellspring of authority for [counterterrorism] operations and not to rely on Article II claims,” Pomper said. “Now there’s AUMF fatigue and they’re springing back to Article II.”

Reining in presidential war powers is a lot like playing whack-a-mole. Take out one flimsy legal justification and another is ready to take its place. “What this teaches us is the whole framework really does need to be revisited,” Pomper said. “You need root-and-branch reform.”