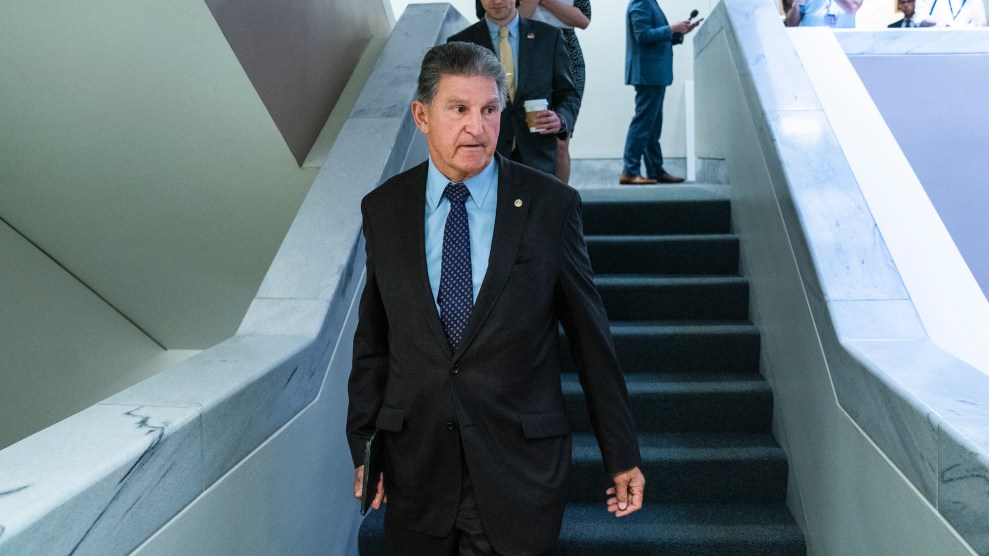 West Virginia Senator Joe Manchin’s unrelenting quest for bipartisanship has claimed its most recent victim: A sweeping voting rights and election reform bill that has been a top priority for President Joe Biden and Democratic lawmakers.

Manchin formally announced his decision to vote against HR 1, the For the People Act, in a Sunday op-ed in the Charleston Gazette-Mail, citing its lack of support from Republican lawmakers as the main reason for his disapproval. “The right to vote is fundamental to our American democracy and protecting that right should not be about party or politics,” Manchin wrote. “Protecting this right,” he added, “should never be done in a partisan manner.”

The West Virginia senator also reiterated his continued support for the filibuster, promising once again that he refuses to “weaken or eliminate” it.

The legislation would have tamped down on murky campaign spending, ended partisan gerrymandering of congressional districts, and expanded voting access through longer voting periods and enhanced absentee voting. Senate Majority Leader Chuck Schumer (D-N.Y.) had planned to bring the legislation to the Senate floor for a vote at the end of June, where it would need 60 votes to pass—an impossible feat without any Republican support.

Other Senate Democrats had privately fretted during a private meeting last week over the breadth of the bill and had sought changes to it before Schumer brought it to the floor. But Manchin’s opposition to both the bill and any filibuster changes guarantees its failure.

Manchin has raised more concerns about the party line support for the bill than any of the priorities detailed in it. He released a statement in March advocating that the Senate reject the sweeping bill in favor of a handful of its provisions, such as enhancing election security and campaign finance reform, which he believes would lend themselves to a “bipartisan solution.” In Sunday’s op-ed, Manchin cautioned against legislation not crafted in such a manner. “Voting and election reform that is done in a partisan manner will all but ensure partisan divisions continue to deepen,” he warned.

But such an argument comes at a time when Republican lawmakers in GOP-held states such as Texas, Georgia, and Florida have advanced draconian voting restrictions designed to solidify their party’s control of power by making it harder for Americans to vote. Even as he urged bipartisan consensus, Manchin slammed those states’ efforts to “needlessly restrict voting” and reiterated his support for the John Lewis Voting Rights Advancement Act, a narrower bill aimed at restoring key elements of the 1965 Voting Rights Act that have been gutted in the intervening decades. But defenders of the For the People Act say that only more ambitious democracy reforms will actually stop those attacks. “It’s not sufficient to do anything about the attacks that are underway right now by state legislatures,” Sen. Chris Murphy (D-Conn.) told The Intercept last month.

Filibuster abolitionists within Congress and on the outside had theorized Manchin’s mind might change once he bore witness to the GOP’s efforts to systematically undermine any real progress. Their hypothesis failed its first test last month when Senate Republicans blocked a commission to investigate the January 6 attack on the US Capitol. Manchin had been sure Democrats could find “10 good people” among their GOP colleagues to support an investigation into an insurrection that endangered all of their lives. That didn’t happen, but Manchin remained undeterred. “I don’t think I’ll ever change,” Manchin told reporters that week. “I’m not separating our country, OK?”

On the Sunday morning talk shows, Manchin batted down criticism that his guarantee to protect the filibuster disincentivizes the GOP from negotiating over legislation. “Haven’t you empowered Republicans to be obstructionists?” Fox News’ Chris Wallace asked. Manchin said he didn’t think that was the case, and that he has GOP colleagues who vote for “what they know is right, the facts as they see them” without “worrying about the political consequences.”