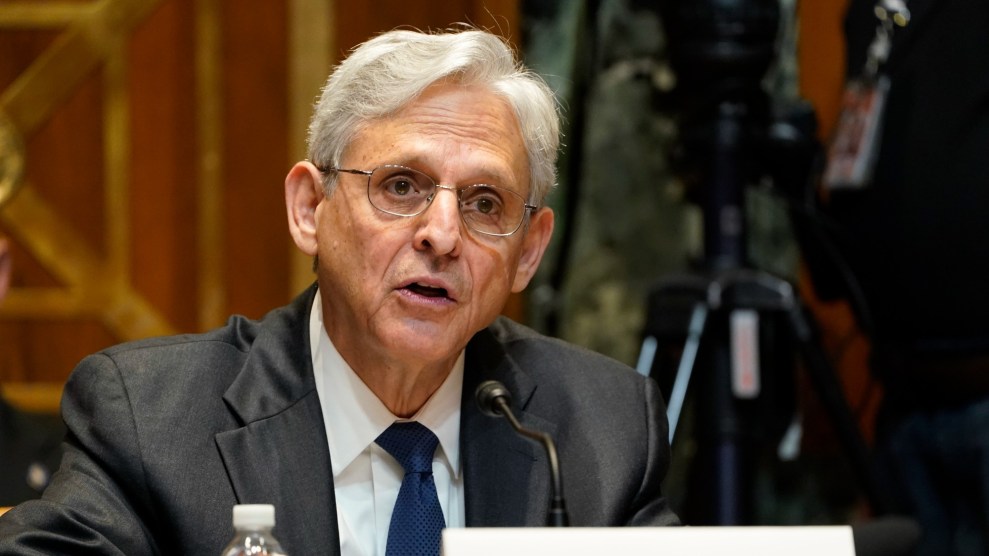 Under President Joe Biden, the Justice Department is defending many of the polices and prerogatives of former President Donald Trump. Six months after Trump left office, lawsuits on matters ranging from the Trump-Russia scandal to a rape allegation against the former president are still winding through courts, and DOJ is siding with the former president in some cases, and fighting Congress to keep Trump-era records secret in others.

The Justice Department appears to be doing this because it is run by lawyers eager to preserve executive branch power against legislators, and because Attorney General Merrick Garland wants to avoid “re-litigating” Trump-era controversies, according to aides.

DOJ, in other words, has decided to defend Trump to help Biden. But to Trump’s critics, this stance amounts to a feckless stymying of accountability for a president and aides whose conduct was unprecedented in its lawlessness.

Here is a run-down of matters where the Justice Department is, at least in part, siding with or protecting Trump.

Lawmakers are investigating revelations that former Attorney General Jeff Sessions launched a leak investigation—continued by his successor, Bill Barr—that resulted in prosecutors obtaining records of reporters and at least two Democrats on the House Intelligence Committee. This was a probe, launched under heavy pressure by Trump, to punish officials who revealed details of his campaign’s contacts with Russians in 2016.

But under Garland, the Justice Department has “not been forthcoming” in detailing this leak hunt, said Adam Schiff, one of the spied-upon lawmakers. According to Washington Post, Schiff, the House Intelligence Committee Chairman, has demanded to know the legal predicate for targeting members of Congress and their aides, and has asked for a timeline of DOJ’s leak probe, along with a list of all the subpoenas issued as part of it.

So far he’s been stiffed. “We have repeatedly posed basic and readily answerable questions to the department for more than a month, but have received virtually no information beyond a confirmation that the investigation is closed,” an intelligence committee aide told the Post. The House and Senate Judiciary Committees, which have jurisdiction over DOJ, are also looking into the spying issue and might fare better at unearthing information. But DOJ appears likely to resist. Schiff says he has asked Garland to launch a “wholesale review” of Trump’s politicization of DOJ. It’s unclear if Garland will do so.

Garland’s Justice Department has effectively sided with Trump against a woman who says Trump raped her. Department lawyers are arguing that the presidency shielded Trump from being sued for libel and slander in comments he made denying E. Jean Carroll’s claim. Carroll, a former advice columnist, alleged in 2019 that Trump forced her to have sex against her will in a dressing room at Bergdorf Goodman, a department store in Manhattan, in late 1995 or early 1996. In response, Trump claimed he had never met Carroll. He also said she was “not my type,” comments that led Carol to sue him for defamation. Last year, the Justice Department took over the case from Trump’s lawyers, arguing he was acting in his official capacity as president when responded to her claims. Biden joined in a chorus criticism for that move, accusing Trump of of treating the DOJ like his “own law firm.” But now, the department is protecting Biden’s ability to avoid being personally sued. The White House has distanced itself from that position, but has left the DOJ to pursue it in court.

US District Court Judge Amy Berman Jackson last month accused Barr of making “disingenuous” arguments in a bid to keep secret the contents of a memo Barr received following Special Counsel Robert Mueller’s investigation into Trump’s dealings with Russia. Jackson ordered release of the memo, which she said showed that Barr was bent on downplaying Trump’s culpability, and formed part of Barr’s pattern of misleading and false claims about Mueller’s findings. Sens. Dick Durbin (D-Illinois) and Sheldon Whitehouse (D-R.I.) asked the Justice Department not to appeal Jackson’s ruling. “DOJ’s actions in this case… have raised doubts about DOJ’s candor when characterizing potential evidence of President Trump’s misconduct to courts,” they wrote. “To be clear, these misrepresentations preceded your confirmation as Attorney General, but the Department you now lead bears responsibility for redressing them.”

But DOJ did appeal Jackson’s ruling, arguing the memo was “pre-decisional” and thus dangerous to release publicly. DOJ also disputes Jackson’s argument that its earlier claims were misleading, blaming poor wording, not mendacity, for any “confusion.”

House Ways and Means Chairman Richard Neal (D-Mass.) is still fighting in court to force the IRS to release six years of Trump’s tax returns to Congress, though the law appears to be on Neal’s side. CNN recently reported that negotiations in the case are ongoing, and that the fight may end “without the Biden administration cleanly handing over the tax returns.” The report says DOJ has not signaled what it plans. But it is clear that the department is not simply going to drop resistance and turn the records over to Congress.

In 2017, the General Services Administration, which manages most federal real estate, announced it was okay for Trump to lease a luxury hotel in Washington, despite a clause in the agreement saying no “elected official” could benefit from the agreement. That decision, made under political pressure, gave Trump a way to profit as president from foreign and domestic supplicants looking to put money in his pocket. Two House committees are still looking into the matter, fighting in court to enforce subpoenas on the contract and GSA’s decision. Under Biden, the agency has handed over some information, but has demanded that some information on the lease remain secret, due to concerns for the privacy of the Trump Organization’s proprietary interests. And the Justice Department is appealing a lower court judgment in favor of the congressional Democrats in their suit, the Washington Post noted this month.

In May, 87 former federal prosecutors asked Garland to abandon a Trump administration policy of charging gun crimes that occur in the District of Columbia in federal court. The prosecutors say that due to stiff mandatory federal penalties for gun arrests, the policy disproportionately affected Black residents. Average sentences for gun crimes are about twice as high in the federal court system, the Washington Post has reported. But DOJ has so far indicated no plan to change course.

While Biden has broken with many of Trump’s draconian immigration policies, the Justice Department is quietly defending some Trump-era rules and their architects in court, the New York Times recently reported. DOJ lawyers have argued to keep in place a policy that bars immigrants with temporary protected status from gaining green cards with the support of their employer. They have also agreed to defend former members of the Trump administration, including Jeff Sessions and Stephen Miller, in lawsuits seeking damages for harm caused by the family-separation policy they advocated. This is a traditional step for DOJ to take. But Lee Gelernt, the deputy director of the American Civil Liberties Union’s Immigrants’ Rights Project, told the Times that the department should reconsider due to the historically heinous conduct it is now defending. “For the Biden DOJ to choose to represent the people who did the family-separation practice is deeply troubling,” he said.