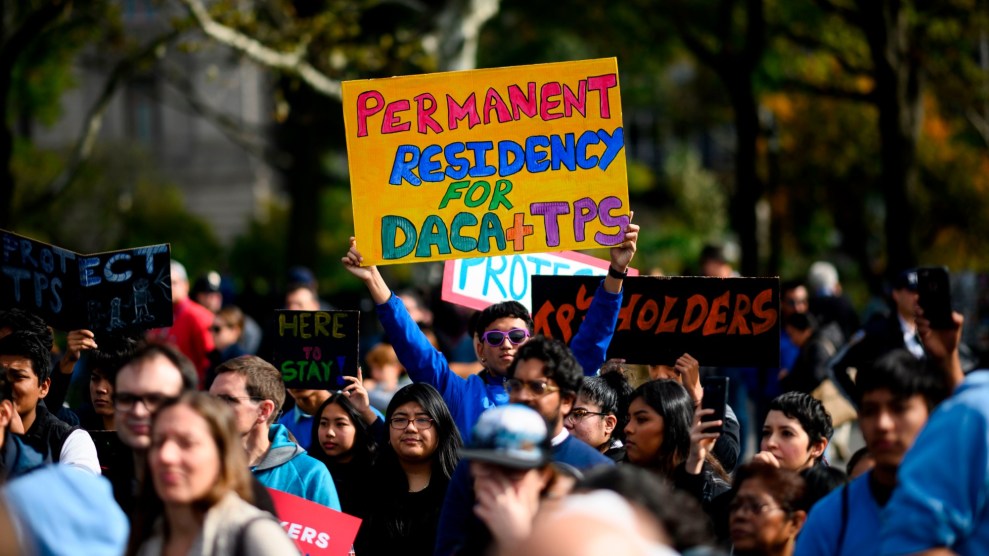 Protesters march from New York City to Washington DC, to the US Supreme Court.Johannes Eisele/AFP/Getty

In a unanimous decision on Monday, the Supreme Court eliminated one of the few paths to a green card for immigrants with Temporary Protected Status who entered the United States unlawfully. TPS offers humanitarian relief against deportation and provides work authorization for about 400,000 citizens from 12 designated countries—including Haiti, El Salvador, Venezuela, and Burma—that have been impacted by extraordinary circumstances such as armed conflicts or environmental disasters.

In Sanchez v. Mayorkas, the justices upheld the decision from a lower court regarding two El Salvadoran nationals, Jose Sanchez and his wife Sonia Gonzalez, who came to the United States in the late 1990s. They have held TPS status since 2001, when the US government included the country in the program following a series of catastrophic earthquakes, and they have a US citizen son. But when they applied for a green card in 2014 that would have granted them permanent residency, it was denied based on their unlawful entry. “Because a grant of TPS does not come with a ticket of admission,” Justice Elena Kagan wrote, “it does not eliminate the disqualifying effect of an unlawful entry.”

The decision came as blow to immigrant rights activists and attorneys who say tens of thousands of people who have lived and worked in the United States for decades now will be left in limbo. Immigrants with TPS who entered legally on a student or tourist visa, for instance, are still eligible to apply for a green card in the United States if they have a qualifying sponsor like a family member or an employer.

Before today, TPS holders in the 6th, 8th, and 9th circuits could more easily adjust to green cards if they had a sponsor, because those circuits counted a grant of TPS as an "admission." Now, all TPS holders are in the same situation, with more barriers to green cards. https://t.co/7boqHxEx3f

Today’s SCOTUS decision on TPS – which blocks easy access to legal status – is just another reason why local communities need to fund deportation defense and end ICE detainers if they want to protect their immigrant neighbors.

The decision attempted to resolve a disparity within the various circuits of the US Court of Appeals. When Sanchez challenged the denial of their petition for a green card, a District Court in New Jersey sided with them and found that TPS recipients should be considered as having been “inspected and admitted” lawfully into the country. But the Court of Appeals for the Third Circuit reversed the favorable decision holding that “a grant of TPS does not constitute an ‘admission’ into the United States.” It further stated that “as its name suggests, this protection is meant to be temporary.” But up until now, TPS holders in states like Ohio, Michigan, Arizona, and California, among others under the jurisdiction of the 6th, 8th, and 9th circuits, have been considered to be eligible for permanent residency from within the United States without having to apply for re-entry through consular processing abroad—even though they may have entered unlawfully.

As Justice Kanagan noted in the opinion, legislation pending in Congress could resolve the issue for the TPS holders who were affected by this decision. Under the American Dream and Promise Act of 2021, non-citizens with TPS or those who are eligible for it on or after September 2017 and meet certain requirements would be allowed to apply for a green card. The standalone bill passed the House in March, but faces an uphill battle in the Senate.

“Although this is a huge blow for one of the only available avenues for our families to adjust their status, this will not deter our struggle for obtaining green cards for all TPS holders,” Claudia Lainez, a TPS holder from El Salvador and regional organizer for the National TPS Alliance said in a statement. “This news only emphasizes the fact that Congress must act now to guarantee permanent protections and for President Biden to expand the TPS status to everyone who deserves it.”

Another big loss at #SCOTUS this morning on immigration. 9-0, just like last week's decision. This morning the case is Sanchez v. Mayorkas, involving the ability of SOME TPS holders to adjust status to lawful permanent residents. Opinion is here: https://t.co/Ytg6oDW9w7 1/5