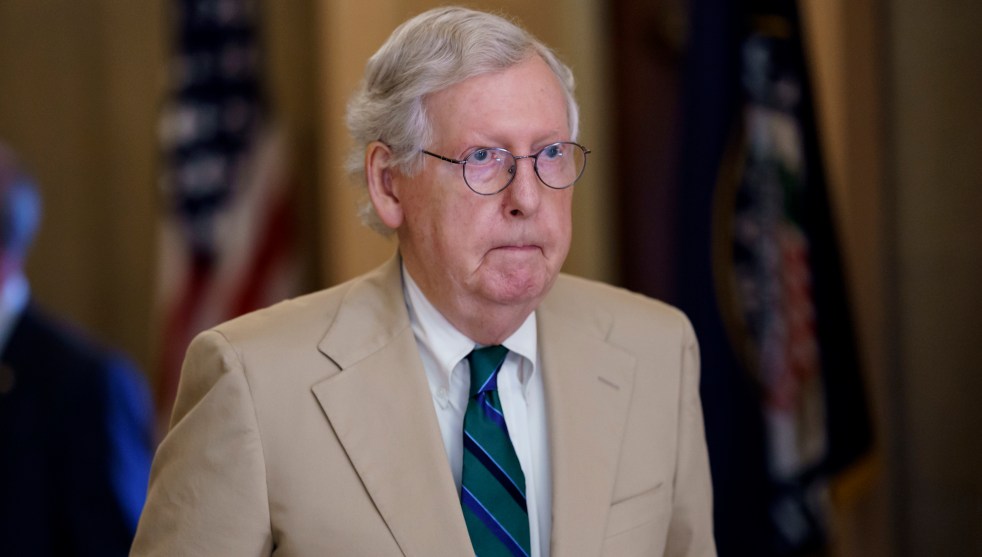 Congressional Democrats’ signature voting rights bill, the For the People Act, is set to be defeated on Tuesday by the very anti-democratic system it’s meant to reform.

The 50 Democratic senators who support the For the People Act (or least Sen. Joe Manchin’s compromise proposal keeping some key elements of the bill while excluding others) represent 43 million more Americans than the 50 Republican senators who oppose it, according to data compiled by Alex Tausanovitch of the Center for American Progress. Yet because of the 60-vote requirement to pass most legislation, 41 Republican senators representing just 21 percent of the country can block the bill from moving forward, even though it’s supported by 68 percent of the public, according to recent polling.

The bill wouldn’t change the deeply unrepresentative nature of the US Senate, but it would expand voting access for millions of Americans through policies like automatic voter registration and two weeks of early voting, while cracking down on partisan gerrymandering and dark money to make the system more fair.

Yet Democrats and Republicans are playing by two different sets of rules. Because Manchin and Sen. Kyrsten Sinema (D-Ariz.) will not support getting rid of the filibuster, Democrats must find 10 GOP votes to pass legislation to preserve American democracy—essentially giving Mitch McConnell veto power over protecting voting rights—while heavily gerrymandered GOP state legislatures unilaterally enact a barrage of new voter suppression bills through a simple majority vote that will make it harder for Democrats to win future elections.

According to the Brennan Center for Justice, 22 of the 24 laws passed this year to restrict voting access were introduced and sponsored solely by Republicans and passed over the objections of the Democratic minority—the reverse of what is happening in the Senate right now. When Mitch McConnell called the For the People Act “a partisan power grab” on Monday, he was actually perfectly describing what Republicans are doing in the states. In a Washington Post op-ed on Monday, Sinema expressed her fear that if Democrats eliminated the filibuster to pass the For the People Act, Republicans would retaliate by passing new voter ID laws and restrictions on mail voting when they take the majority, but that is exactly what is already happening at the state level, Greg Sargent notes in the Post, and what the For the People Act is designed to stop.

41 GOP Senators who represent 21% of the US population can block the For the People Act—a sweeping piece of legislation that would expand voting protections for all Americans.@AriBerman explains:pic.twitter.com/ShHkcVwDCq

At every level, Democrats are at a disadvantage: They must win millions more votes than Republicans simply to reach a split Senate, only to see their agenda thwarted by GOP senators from a small number of disproportionately rural, white, conservative states.

Democratic leaders hope that the GOP’s blockade of the For the People Act, combined with filibusters on legislation such as the January 6 commission and equal pay for women, will convince the likes of Manchin and Sinema to reconsider their position on the filibuster. Voting rights advocates including Stacey Abrams have been arguing for months that voting rights legislation should be exempted from the filibuster, a position that has been embraced by influential Democrats like Amy Klobuchar (D-Minn.), chair of the Senate Rules Committee. “This is the once-in-a-century moment to protect people’s right to vote,” Klobuchar told me in March.

The right to vote is sacred—it is the foundation of our democracy. Congress cannot stand idly by as attacks on the ballot box ramp up nationwide. This body has a solemn duty to protect the people's voice.

We must pass voting rights. No matter what. https://t.co/HpqeBzfDs3

Democrats in states hit hard by GOP voter suppression efforts have been forcefully making the argument that this is their last best chance to stop such tactics. “What could be more hypocritical and cynical than invoking minority rights in the Senate as a pretext for preventing debate about how to preserve minority rights in the society?” Sen. Raphael Warnock (D-Ga.) said on the Senate floor on Tuesday. “Right now, constitutional rights across our nation are being assaulted, and I fear that if we don’t act as a body in this moment, we will have crossed a dangerous rubicon in our nation that will make it extremely difficult for the next generation to secure voting rights for every eligible American. This is not just another moment in another Congress. We should not just think of this as routine. This is a defining moment.”