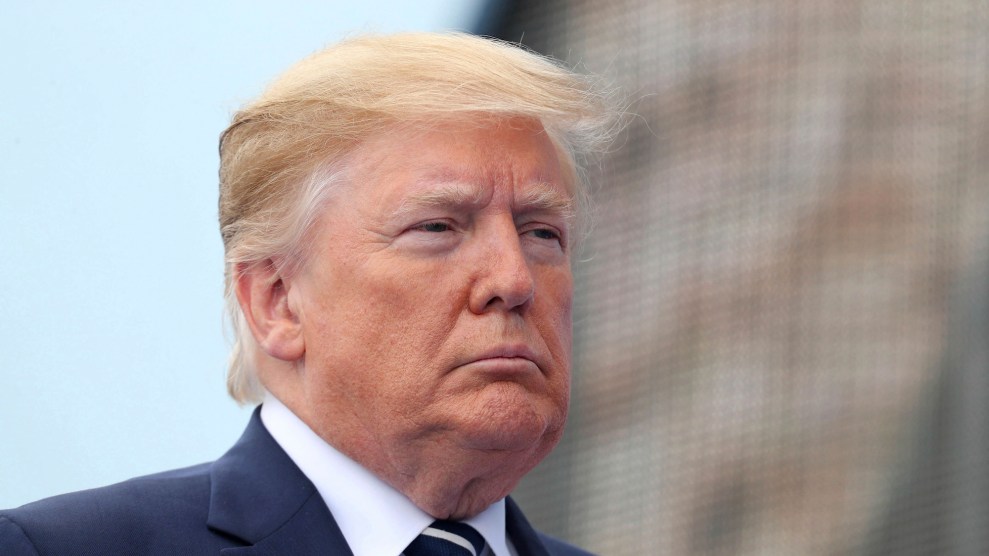 After Manhattan District Attorney Cy Vance indicted the Trump Organization and its chief financial officer Allen Weisselberg for tax fraud on Thursday, supporters of Donald Trump took pains to point out that the former president had not been charged personally. But setting aside the strong possibility that Vance may file more charges in the case, a criminal indictment of Trump’s company hits close to the man the brand is built on. The Trump Organization is Trump, and Trump is the Trump Organization. And this indictment could have severe repercussions for the firm and Trump himself.

The Trump Organization is something of a one-note brand—nearly every aspect of the company’s identity is tied to the former president. The company’s entire strategy is to appeal to consumers by evoking the ethos of wealth, status, and luxury that Trump has tried to equate with himself. But the company is also, legally speaking, his alter ego. With the exception of a few ventures, Trump owns 100 percent of every corporate entity and asset that falls under the Trump Organization umbrella. According to personal financial disclosure statements filed when he was president, the Trump Organization itself—the entity that was officially indicted on Thursday—is 100 percent owned by a company called DJT Holdings Managing Member LLC, which is, in turn, 100 percent owned by the Donald J. Trump Revocable Trust. According to the trust’s paperwork, its sole purpose is to hold assets for the benefit of the man himself. Its three trustees are Trump, his son Donald Jr., and Weisselberg.

“An indictment can make conducting business very difficult because if you are going to borrow money from lenders, you’re going to need to disclose to the lender all the risks. As you might imagine that makes lenders skittish,” says former prosecutor Renato Mariotti.

The pattern repeats itself at nearly every property owned by the former president. A few more companies may stand between the asset and the Trump trust, but the ownership almost always ends up in Trump’s hands. The exceptions are mainly properties that are used mostly by the Trump family, as well as the Trump Hotel in Washington, DC, in which Don Jr., Eric, and Ivanka Trump own minor stakes.

In fact, in 2017, when Trump took office and continued to refuse to release copies of his tax returns, one of the main rationales his lawyers employed for withholding this information from the public was that Trump and the Trump Organization are inextricably linked. “You hold interests as the sole or principal owner in approximately 500 separate entities. These entities are collectively referred to and do business as The Trump Organization,” his attorney Sherri Dillon then wrote Trump in a letter that was made public. “These entities engage in hundreds of transactions, deals and new enterprises every year. Because you operate these businesses almost exclusively through sole proprietorships and/or closely held partnerships, your personal federal income tax returns are inordinately large and complex for an individual.”

The reason anyone knows how much money Trump owes to creditors is also because of the close ties between him and the Trump Organization. On his personal financial disclosures, Trump reported hundreds of millions of dollars in debt, even though under disclosure rules the debts of a company you own need not be disclosed. But there is one exception: if you’re personally liable for that debt, as Trump is (to varying degrees) for most of the Trump Organization’s debts.

If Vance wins a conviction or if the company eventually pleads guilty,  Trump and his firm could face steep costs, including back taxes and fines. But financial penalties may pale in comparison to the broader effects that the indictment may have on Trump’s already beleaguered company, says Renato Mariotti, a white collar defense attorney and former federal prosecutor.

“I think the other consequences are probably going to be more serious for the Trump Organization,” he says. “An indictment can make conducting business very difficult because if you are going to borrow money from lenders, you’re going to need to disclose to the lender all the risks. As you might imagine that makes lenders skittish.”

Mariotti says failure to inform lenders about the full risk an organization faces from an indictment amounts to fraud. Trump is already facing a credit crunch in which he owes as much as a half-billion dollars to various lenders. These IOUs are coming due in the next four years. Most banks have already sworn off doing business with the former president, and  Vance’s charges will make the process of finding a lender to refinance Trump’s loans much harder. Mariotti notes that the same disclosure requirements could also affect other potential Trump deals—for instance, offloading the lease on Trump’s DC hotel (which he is currently trying to do) or forging new joint ventures.

Prosecutors made clear in Thursday’s indictment that they are aware there is little space between Trump and his company—and let on that they believe he personally participated in the tax fraud scheme for which his company and chief financial officer were indicted. As assistant district attorney Carey Dunne told the court during Weisselberg’s arraignment, “the former CEO signed, himself, many of the illegal compensation checks.”