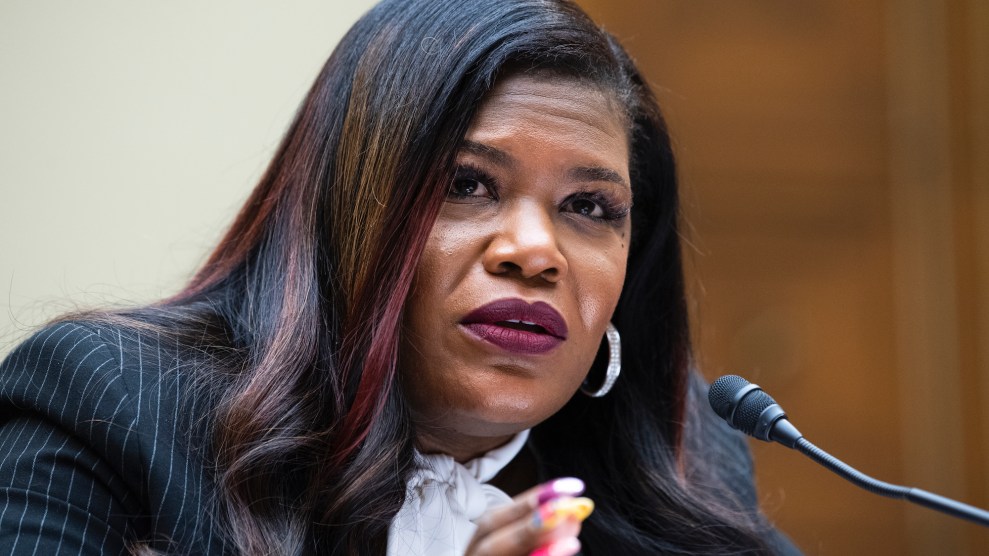 One of Congress’ most left-leaning lawmakers is sticking her neck out early to endorse a primary challenger against an incumbent member of her caucus. Rep. Cori Bush (D-Mo.) is endorsing Amy Vilela, a Democratic candidate mounting a challenge against Rep. Dina Titus (D-Nev.) in Nevada’s 1st Congressional District, which includes most of Las Vegas. Bush, one of the six “Squad” members who uphold Congress’ left flank, won her seat last year after defeating former Rep. Lacy Clay (D-Mo.) in a Democratic primary.

Bush’s endorsement of Vilela marks an aggressive, early push against a fellow member of her party, something her fellow Squad members have generally approached with caution—even if many of them owe their seats to those very sorts of challenges. As a newly elected lawmaker, Rep. Alexandria Ocasio-Cortez (D-N.Y.) raised eyebrows when she called for primary opponents against soon-to-be colleagues soon after her 2018 election. But after that initial broadside, she has ended up being choosy about her endorsements when she actually started working alongside them as a member of Congress. She’s lent her support only to a handful of candidates— and typically not until much later in the cycle. (Ocasio-Cortez conspicuously declined to endorse Bush’s 2020 rematch against Clay after campaigning on Bush’s behalf in 2018.)

Bush tells me she’s not worried about ruffling her colleagues’ feathers. She does that all the time, she explains, when she expresses her support for defunding the police—even if her moderate colleagues wish she wouldn’t. “I understand that people within my caucus may not like the fact that I’m endorsing Amy, period, and that’s okay,” she tells me. Bush notes her endorsement is “not to go against” Titus. “This is not a jab at the person that’s in the seat,” Bush says. “This is just saying that we need change.”

Still, Bush’s endorsement comes at a difficult moment for Democrats in Washington, who are trying to project an image of unity as they push forward on a pair of infrastructure plans—one a bipartisan agreement with Republicans, another a $3.5 trillion reconciliation plan that would only require Democratic votes—that could easily be imperiled with a narrow Democratic-majority in both chambers of Congress. The demands of the Squad have often taken a back seat to moderates in the Senate, who have been more willing to flex threats of quashing bills in order to get their preferred policies into bills.

A spokesperson for Titus’ campaign did not directly comment on Bush’s endorsement. “Right now, Congresswoman Titus has been focused on helping residents, businesses, and families recover from the pandemic and get back on their feet,” the spokesperson said. Titus has previously described Vilela’s run as “opportunistic.”

Vilela, a former accountant, first ran for Congress in 2018 for an open seat in Nevada’s 4th Congressional District. Her run had been inspired by the sudden death of her 22-year-old daughter, Shalynne, who died of a blood clot that went undetected as the family tried to resolve conflicts in her daughter’s health insurance. Vilela centered her first campaign on the need for single-payer health care. “I understand, quite uniquely, that every political decision that’s made is really a life-or-death decision for someone in this country,” Vilela tells me.

She came in third place in the Democratic primary to the seat’s eventual winner, Rep. Steven Horsford (D-Nev.). Vilela served as a chair of Bernie Sanders’ 2020 presidential campaign in Nevada and supports policies consistent with the Vermont senator’s platform. She now runs a political consulting firm that advises progressive candidates on financial and compliance issues. Vilela is also a member of the Democratic Socialists of America and often volunteers with the DSA’s Las Vegas chapter. And she’s taking on Titus, she says, because she thinks the six-term incumbent is “out of touch with the community” and “nowhere to be seen” in the district. (A spokesperson for Titus noted that Titus has spent the House’s current two-week recess in her district promoting COVID vaccinations and rallying support for Nevada’s new safety law for home care workers.)

Bush met Vilela when the two women first ran for Congress in 2018 as recruits for Justice Democrats and Brand New Congress, then-new organizations that encourage progressive candidates to run against moderate Democratic incumbents or for open seats. That year, Bush waged her first attempt to unseat Clay while Vilela ran in a crowded primary. “Knock Down the House,” a documentary about the new organizations’ project, profiled their unsuccessful campaigns alongside Ocasio-Cortez’s victory. (Vilela has not earned an endorsement from Justice Democrats this cycle, though the group has not ruled out doing so.)

“I just remember her being a very vocal and strong advocate on several issues,” Bush says of meeting Vilela. “Medicare for All, equal rights—she was just fierce.” Bush calls Vilela one of her best friends and a “true advocate” for the agenda Bush and her fellow Squad members support. “It’s a tough thing when you stand up and say, ‘Hey, we’re all on the same side, but we need more,’” Bush explains of pushing back against fellow Democrats, but Vilela, Bush says, is “going to be the one” willing to do that.

Titus’ district covers the racially diverse Las Vegas metropolitan area and tends to run deep blue. The six-term incumbent has kept up with her constituency by fashioning herself as a sort of pragmatic progressive. She co-sponsored the House’s Medicare for All bill, for example, but has spoken of the need to take interim steps to realize the measure’s ambition. She supports canceling $10,000 in student loan debt per student—a more modest amount than what progressives call for—and has been skeptical of the Green New Deal. Titus also offered an early endorsement to then-candidate Joe Biden, whose favorability has remained high. “It’s kind of hard for me to figure out how you attack me,” Titus told the Washington Post last month.

But Vilela is banking on the legacy that Sanders, not Biden, has left in the district. Las Vegas caucus-goers delivered the early state to Sanders, another self-described democratic socialist, the result of more than a year of relentless organizing. In March, DSA members voted to replace the state Democratic Party’s leadership with their allies in a move that media described as a “socialist takeover.” The new party chair, Judith Whitmer, was a Sanders delegate at the 2020 Democratic National Convention. “It’s really just a whole new Democratic party,” Vilela tells me. “We have a lot of progressives getting more engaged into party politics and making sure they have a seat at the table.”

Successful progressive challenges in recent cycles occurred when Republicans controlled the White House and Congress—a free-for-all moment for Democrats, whose various ideological factions competed to chart the party’s future. That window has since closed. The left’s favored presidential hopefuls lost to Biden, but along the way, he and other party leaders absorbed many of progressives’ most popular positions into the Democratic Party’s official agenda. Earlier this year, Democratic lawmakers voted for a massive pandemic relief package that pilots some of the most ambitious anti-poverty measures since Johnson’s Great Society. In the coming months, they’re likely to approve trillions more in spending that would amount to the greatest government intervention since the New Deal. Such a voting record complicates progressives’ criticisms of incumbent lawmakers, such as Titus, for not supporting robust policies.

“Some good things have been done,” Vilela acknowledges when I ask her how she’s planning to differentiate herself against this political backdrop. “But it’s all because progressives have been pushing legislators to actually make sure they’re getting those things done.”

This piece has been updated to include comments from Rep. Titus’ campaign spokesperson.