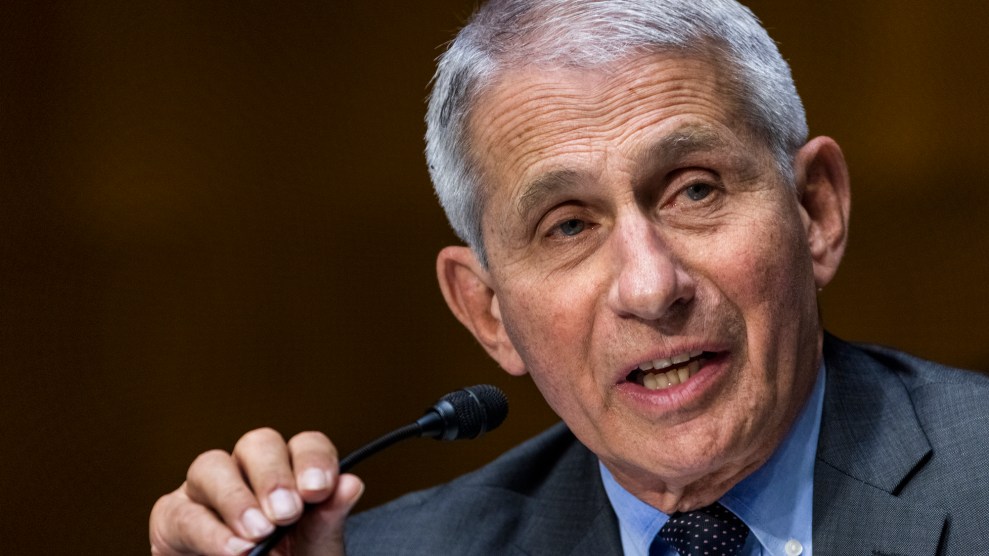 The Conservative Political Action Committee conference in Dallas this weekend has been full of the usual moments from the Republican Party’s most outrageous figures trying to be the most performatively provocative. Notable, however, has been the drumbeat of anti-vaccine rhetoric that has pervaded CPAC’s annual gathering—even as the Delta variant of COVID-19 continues to build steam across unvaccinated parts of the country.

On Sunday, Dr. Anthony Fauci, a top federal official leading the pandemic response, called the anti-vaccine politics on display “horrifying.” Fauci was reacting to a talk in which anti-vaxxer Alex Berenson was roundly cheered by a CPAC audience for saying the US government had failed to “sucker” 90 percent of Americans into getting vaccinated.

“It’s horrifying, I mean, the cheering about someone saying that it’s a good thing for people to not try and save their lives,” Fauci told CNN’s Jake Tapper. “If you just unpack that for a second… it’s almost frightening to say ‘Guess what? We don’t want you to do something to save your life! Yay!’ I just don’t get that and I don’t think anybody who is thinking clearly can get that.”

COVID-19 skepticism—and then vaccine skepticism—has been a regular part of conservative populism since the pandemic started, but the rhetoric on display at CPAC has underscored a growing dissonance. On the one hand, vaccines have shown much success in halting the spread and worst medical outcomes from the virus, with parts of the country with high vaccination rates seeing life returning to normal. On the other hand, the Delta variant is driving case numbers higher and higher in areas where vaccination rates are low. In Arkansas, Saturday brought a third straight day of new cases topping 1,000—higher than infection levels seen a year ago when so much less was known about COVID-19 and no vaccines were available. The state’s own Republican governor is pleading with residents to get vaccinated.

Others carrying the anti-vaccine torch at CPAC included Colorado congresswoman Lauren Boebert, who mocked Biden’s efforts to get more people vaccinated and provide economic relief to states where the economy is still struggling to restart after pandemic-related shutdowns. “We’re here to tell the government we don’t want your benefits, we don’t want your welfare,” Boebert declared, strutting across a stage as she spoke. “Don’t come knocking on my door with your Fauci ‘ouchy’—you leave us the hell alone.”

Rep. Madison Cawthorn of North Carolina went further in an interview onstage Friday night, pushing the idea that Biden’s goal to vaccinate more Americans, going house-to-house if necessary, was terrifying government overreach. He suggested that if the federal government cultivated the ability to go door-to-door for vaccinations that would create the kind of infrastructure that could “take your Bibles” (apparently overlooking that the U.S. Postal Service, the Census Bureau and other federal agencies already have the ability to go door-to-door but don’t confiscate Bibles.)

Meanwhile, in Springfield, Mo., where 58 percent of voters backed Trump, local health officials said doctors were “exhausted and overwhelmed” as they faced the worst COVID numbers in sixteen months. Mid-week, one hospital in the area, which has a vaccination rate of around 35 percent, ran out of ventilators after seeing the number of hospitalized patients rise from 10 to 128 over the last six weeks. Although eventually resupplied, the hospital was still forced to shuttle patients to other facilities because they lacked the staff to care for them.