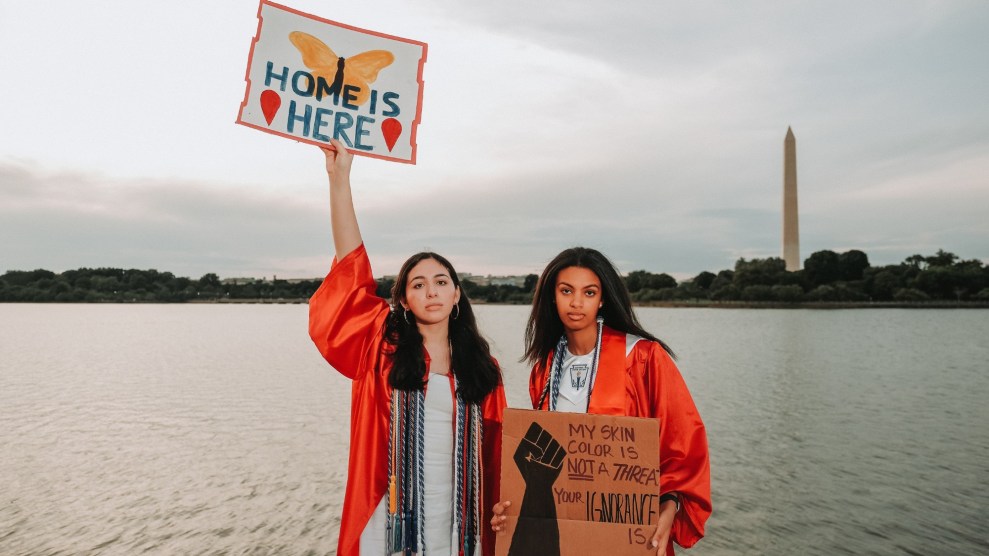 Karla Mercado Dorado left Bolivia when she was two years old, which means the United States is the only home she’s ever known. Growing up undocumented, she felt like she had to keep it a secret. “I didn’t know what would happen if I told someone, how they would react, and if anything would happen to me or to my family,” she said.

Dorado was eligible to apply for Deferred Action for Childhood Arrivals (DACA), which provides work authorization and temporary relief from deportation for undocumented immigrants who came to the United States as children. But by the time she reached the required age, then President Donald Trump moved to end the Obama-era program.

After years of waiting, Dorado was finally able to apply for status last December, when a federal judge ordered the Trump administration to accept new applications. By June, as many as 81,000 undocumented youth had applied for DACA for the first time since the program reopened, but a growing backlog has left Dorado and thousands of prospective Dreamers in limbo—and vulnerable—again.

Last week, their hopes turned into disappointment after a Texas judge ruled against DACA and barred the federal government from granting initial requests, at least for the time being.

In a case brought by Texas and a coalition of Republican-led states challenging the legality of DACA, U.S. District Court Judge Andrew Hanen determined that the creation and operation of DACA was unlawful and violated the Administrative Procedure Act. The long-awaited decision doesn’t impact the more than 600,000 Dreamers who currently have status under DACA; it instructs the Department of Homeland Security (DHS) to continue to accept applications and requests for renewals. But it puts on hold the approval of new cases like Dorado’s.

“It was a huge blow,” she says. “I remember just getting really emotional thinking back to all of the plans that I had for for when I finally got DACA and all the hope that I felt getting the second opportunity and the effort that I put in when I was applying.”

All of us who were applying for the first time are once again anxious and lost. The negative impact of Hanen’s decision on DACA happened immediately. We need permanent citizenship now!

In June, as DACA turned 9 years old, I wrote about six first-time applicants who shared “how being undocumented runs deep.” They described feeling trapped because of their uncertain immigration status in the country, missing out on milestone experiences in high school, and having to jump through hoops to achieve their educational goals. For the lucky few who got approved before Judge Hanen’s decision came out, having DACA has offered a sense of relief and security, even if temporary. As Mexican-born Miranda Lovaas described to me:

I think I bawled for two hours straight when I was approved. I was excited, but also feeling survivor’s guilt. For so many people, it’s too late to make a difference for their lives, whether they’ve already been deported, whether they have died in this country while being undocumented, whether they would have been able to apply and gotten approved, but maybe they got arrested and now that hurts their chances.

For countless others like Dorado, this latest setback feels like having something taken from them a second time. “I’m back to where I began the first time when I was eligible but it got ended before I could apply,” she says. “Back to square one.”

Although she rushed to submit her application in December, her biometrics appointment wasn’t scheduled until May due to delayed processing times. Now, Dorado adds, DHS is holding on to background information and $495 individual application fees from thousands of people like her. “We get so close and then it is taken away so easily. It’s even more frustrating seeing how just one person decides the future of so many people.”

But not all is lost. The Biden administration has indicated it will appeal the “deeply disappointing”—though hardly surprising in light of Judge Hanen’s background—ruling and the Department of Homeland Security is expected to issue a rule that would strengthen DACA in the near future. The president and Democratic legislators have also called on Congress to pass the American Dream and Promise Act, which would provide a path to citizenship for as many as 2.5 million undocumented immigrants, including Dreamers. The bill passed the House in March but stalled in the Senate.

“It is my fervent hope that through reconciliation or other means, Congress will finally provide security to all Dreamers, who have lived too long in fear,” Biden said in a statement following the adverse decision from the Texas court. During a CNN town hall this week, he emphasized that Dreamers should be able to stay in the United States. Meanwhile, Senate Democrats have released a $3.5 trillion reconciliation package including a provision that could provide a path to citizenship for Dreamers and other undocumented immigrants, by bypassing the filibuster. The proposal appears to have the support of Sen. Joe Manchin.

Terrible decision on DACA by a federal judge in Texas.

The dreams of hundreds of thousands of young people who are contributing to the American economy will be put on hold for no good reason.

Congress must pass a pathway to citizenship this year. We can’t wait.

Immigrant rights advocates and Dreamers like Dorado say Judge Hanen’s decision only reinforces the need for a permanent solution. “This is not the first attack on DACA, it likely will not be the last,” she says. Dorado was looking forward to getting a job to help cover costs with college and support her parents. She was also hoping to visit family members in Bolivia of whom she has virtually no recollection. Perhaps more importantly, she wanted to have some reassurance that all the sacrifice and hard work hasn’t been in vain. “The whole thing has been waiting: waiting for the decision, for our applications, and now we’re waiting to see what happens next.”