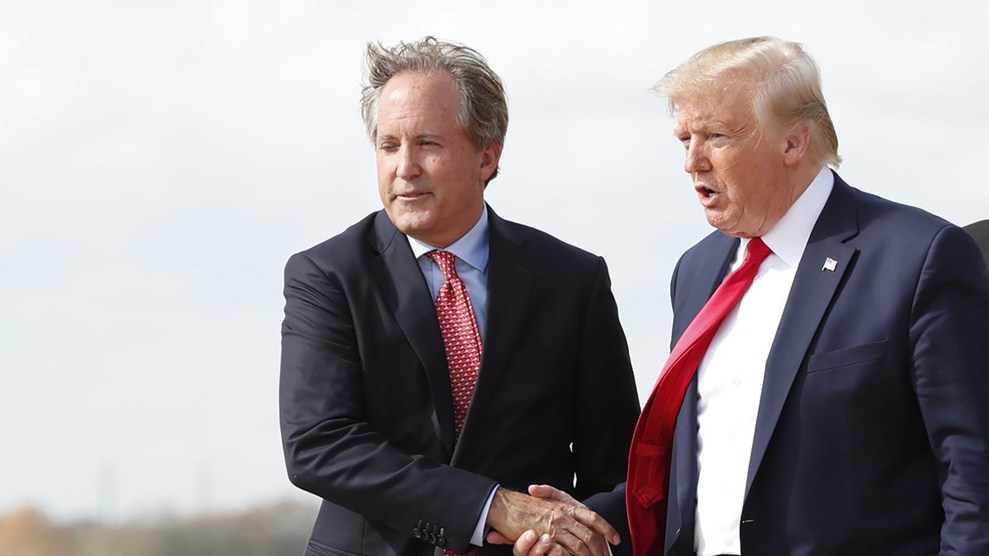 Ex-President Donald Trump was the headliner of the Conservative Political Action Conference in Texas last weekend, but if you want to take the temperature of the party, it’s really the sycophants you should be paying attention to. Take Ken Paxton, the Texas attorney general, who is currently locked in a tough reelection primary against presidential scion and state land commissioner George P. Bush. Paxton is hardly the Republican Party’s most charismatic specimen, but in his quest for political survival he is following a well-worn roadmap.

When it comes to the Republican Party’s war on voting rights, Paxton is arguably the most important figure in the most important state—and the man whose lawsuit to overturn the election results in four other states became a primary vehicle last December for Trump’s attack on the democratic process. At CPAC, he offered more of the same, suggesting that Texas’ restriction of voting rights had saved the state from voting Democratic in 2020, and trumpeting his own investigations into voter fraud in the state. It was a glimpse of the party as it exists today—a one-issue political program devoted entirely to validating Trump’s unfounded grievances.

There is “no more important issue than election integrity,” Paxton told the attendees at CPAC. He recounted (to a sustained ovation) how he had filed a series of lawsuits to block expanded voting access in the runup to the 2020 presidential election, and bragged about the lawsuit he filed to overturn the results of the presidential election—a challenge so legally inept the Texas state bar is currently investigating Paxton over it.

“But our fight is not done,” he continued. “And when people tell you there is no election fraud let me just tell you my office right now has 511 counts in court because of Covid waiting to be heard. We have another 386 that we’re investigating. If you add those together that’s more election fraud than my office has prosecuted since it started investigating election fraud years and years ago.”

Maybe you caught that wording. The Houston Chronicle’s Taylor Goldenstein pointed out the obvious—“counts” is different than cases. Paxton has not charged 511 people with voter fraud; he has charged just 44 people, many of them with multiple counts. It’s a weird sort of math, like adding your weight to your height you make yourself seem taller.

The cases Paxton has prosecuted don’t tell the same story he told CPAC. Paxton brags about throwing the full resources of his office at a problem he believes (or says he believes) is so widespread and systemic that it shifted the outcome of the presidential election in at least four states. (His election lawsuit last December famously cited an amateur calculation that there was “less than one in a quadrillion to the fourth power” chance of Biden winning Pennsylvania fairly.) And yet for all the attention he has given the problem, he has indicted just a handful of people per year for voting-related crimes, none of whose cases offer much of a glimpse of a problem far larger than that. A HuffPost investigation in 2019 found that almost all of the cases Paxton had prosecuted to that point resulted in the defendant simply entering a prosecution diversion program, which is sort of acknowledgment of just how inoffensive these offenses really were. A Houston Chronicle analysis found that Paxton’s office devoted 22,000 of work to prosecute just 16 cases in 2020, none of which resulted in jail time.

In other words, there is not really a there there, behind Paxton’s rhetoric about out-of-control fraud. But then, catching people doing voter fraud is not really the point of investigating and prosecuting voter fraud—building political will to curtail voting access, and discouraging people from trying to vote at all, is the point. Just consider the most recent individual Paxton’s office has gone after for fraud—Hervis Rogers.

On the primary election day in 2020, Rogers waited six hours to vote at his polling location at Texas Southern University in Houston—he was literally the last person to cast his ballot. But Rogers, it turns out, was still on parole after serving a lengthy prison sentence, which meant he was still ineligible to vote. For his mistake, Paxton’s office is now throwing the book at him. Rogers reportedly faces up to twenty years in prison if convicted, with a bond set at $100,000.

Rogers’ ordeal calls to mind the case of Crystal Mason, who was prosecuted by a Tarrant County district attorney for a similar offense in 2018. After serving five years in prison for tax fraud, Mason was released in 2016 and out under supervised release when the presidential election was held that fall. Encouraged to vote by her mother. and unaware that she couldn’t vote while under supervised release, Mason cast a provisional ballot at her polling place. The ballot was eventually thrown out. But Mason was arrested anyway, and sentenced to six more years in prison.

There is an incredible dissonance between the individual acts of petty negligence described in both of those cases—a failure to read the fine print—and the resources and hype thrown into prosecuting them. And it’s dissonance that becomes all the more pronounced when you consider that Paxton, the man leading the fight against this kind of fraud in Texas, is himself under indictment for…fraud. First elected attorney general after admitting to violating securities laws, Paxton was indicted for security fraud during his first year in office and has been under indictment ever since without going to trial—six years, all told—because political allies succeeded in effectively defunding the prosecution. Even while styling himself as a champion of law and order and democratic institutions, he has used his enormous privilege and donor networks to thus far evade accountability for his own alleged transgressions (which now include a staff revolt and additional federal investigation into an entirely separate allegation of corruption). And these two things are related—Paxton is so visibly pursuing the former, by feeding falsehoods about a stolen election, in order to insulate himself back home from the latter.

“It is a travesty that some would attempt to hijack our system of justice,” Paxton himself said after his indictment was announced in 2015, “to achieve political ends they could not accomplish at the ballot box.”