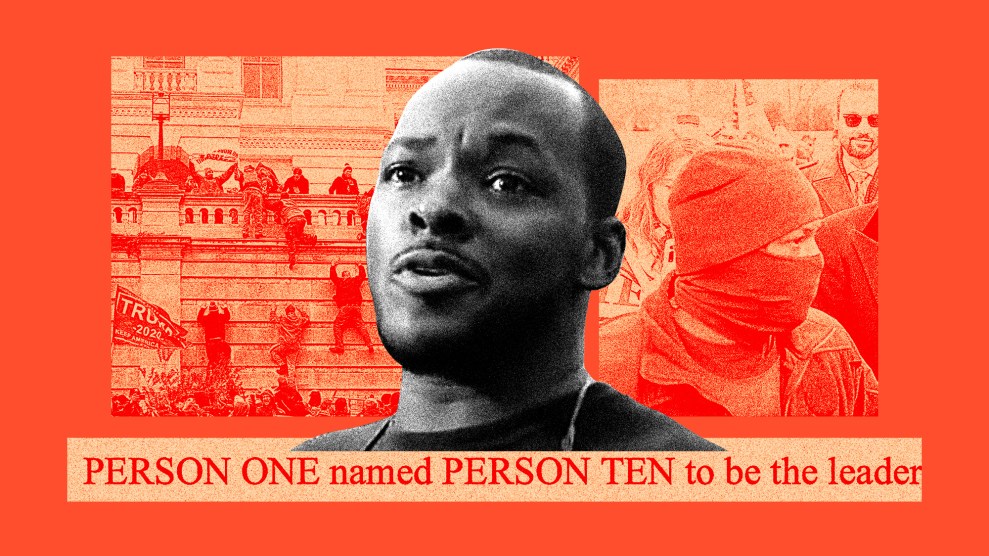 When members of the far-right militia network known as the Oath Keepers stormed the US Capitol on January 6, they were supposed to be under the command of a 37-year-old Black man from a poor neighborhood in Indianapolis—who says he doesn’t support Donald Trump. That man is Michael Simmons, an Army veteran who served in the Iraq War, and who currently faces the possibility of federal charges for his actions on January 6.

Until now, Simmons has not been publicly identified for his role at the Capitol. During multiple phone interviews in recent weeks with Mother Jones, Simmons confirmed he is “Person Ten” in a sweeping federal conspiracy case, an unindicted co-conspirator described by prosecutors in court filings as the leader of operations for a group of Oath Keepers who descended on Washington that day. So far, 19 of the group’s members have been charged with plotting to stop Congress from certifying President Joe Biden’s election victory, among other alleged crimes. Four have pleaded guilty, including Caleb Berry, an Oath Keeper from Florida, who in a July 20 plea hearing admitted that he and his co-conspirators “intended” to hinder Congress by “intimidating and coercing government personnel.”

Court filings detail phone calls and messages that Simmons exchanged with Oath Keepers founder Stewart Rhodes and other group members in the minutes before multiple Oath Keepers unlawfully entered and occupied the Capitol building amid the invading pro-Trump mob. Simmons has been questioned by FBI agents and says he did nothing illegal and has nothing to hide. His actions on January 6 included meeting up just outside the Capitol, alongside Rhodes, with 11 Oath Keepers who participated in the siege. Rhodes has also spoken with the FBI and has not been charged, though he said he expects to be arrested. There is no indication either Simmons or Rhodes entered the Capitol Building. Both deny doing so.

Mother Jones reached Simmons and verified his identity after anonymous online researchers who call themselves “Capitol Terrorists Exposers” provided information about him. Simmons voiced no regret for his involvement with members of a group who helped storm Congress. He defended his own actions, minimized the events of that day and blamed the media for overhyping the assault on the Capitol. “What happened was fucked up,” he said. “It was wrong, but ‘insurrection’ is a bit much.”

According to the Justice Department, participants in the January 6 mob assaulted approximately 140 police officers as well as members of the media and caused $1.5 million in damages to Congress. Some threatened to murder House Speaker Nancy Pelosi and Vice President Mike Pence. Five people who were at the Capitol died on or shortly after January 6. The siege marked the first time in US history that a mob, driven by lies, attempted to violently prevent the peaceful transition of power in Washington.

Simmons also goes by the name Michael Greene (he declined to explain why) and said that he is a former employee of Blackwater, the infamous private security company founded by Erik Prince, a claim Mother Jones was unable to verify. He insisted that his involvement with the Oath Keepers is purely professional and not political. He said he went to Washington as as a security expert, helping to guard longtime Trump adviser Roger Stone and others for pay. He said his experience in the military and his life “as a Black man from a low-income neighborhood” underwrite his disinterest in politics. “It’s exactly the same whoever’s in office,” he said, which is why he said he supports neither Joe Biden nor Donald Trump.

Oath Keepers are a loose-knit network that emerged in 2009 as part of a broader right-wing reaction to the election of President Barack Obama; they espoused baseless claims that Obama was planning a dictatorship and claimed to recruit law enforcement and military veterans, though they also allow members who lack such credentials. Over the past several years, Oath Keepers have drawn attention by showing up armed and clad in tactical gear in cities experiencing civil unrest, where they confronted protesters and said they were guarding local businesses against looting and violence. The group says it does not track members’ demographics, but extensive public footage suggests they are mostly white men. Rhodes’ rhetoric has fueled accusations of racism about the organization: He has warned of immigrants destroying the United States and called Black Lives Matter activists “Marxists” and accused them of “violence and terrorism.”

In a radio interview in April, Rhodes noted explicitly that Simmons was Oath Keepers’ “team leader” in DC and that Simmons is Black.

In a radio interview in April in which he denounced claims that Oath Keepers are white supremacists, Rhodes noted explicitly that Simmons was Oath Keepers’ “team leader” in DC and that Simmons is Black. When members assembled in Louisville last fall to confront demonstrators protesting the fatal police shooting of Breonna Taylor, Rhodes tapped Simmons as well to burnish the group’s image on the scene: Going by the name “Mike Whip,” Simmons told multiple reporters that Rhodes had expelled racists from the organization. “The reputation of militias is a bunch of racist White guys,” he said to the Washington Post. “Some of them are, but not all of them.” Asked if he was a BLM supporter, Simmons said he was for the “Black lives movement, not so much the organization.”

Simmons began his involvement with Oath Keepers in 2017, he said, when a friend suggested he join he group in Houston to help with cleanup and relief after flooding from Hurricane Harvey. “I went out there and they were doing good stuff,” he said. “You never hear about any of that shit in the news.”

The Oath Keepers say they rely on volunteers who are paid only to cover travel and lodging expenses, but Simmons claimed that Rhodes paid him for his security work with the group in Louisville and after the 2020 election. After the election,  Simmons also oversaw Oath Keeper security efforts at multiple “Stop the Steal” rallies, he said.

Prosecutors cited a message sent by Simmons in a Signal Chat including various Oath Keepers: “The[y] have taken ground at the capital[.] We need to regroup any members who are not on mission.”

According to Simmons, Rhodes hired him again to run security on January 5 and 6 in Washington for prominent Trump backers, including Stone. Simmons said that he was paid by Rhodes but declined to say how much he received. “It’s a job,” he said. “If you’re gonna bring me and help set up executive protection for these guys, it’s like ‘Okay, cool.'”

Rhodes designated Simmons “the leader of his group’s operations in Washington, D.C., on January 6, 2021,” according to a recent federal charging document. In the filing, prosecutors cited a message sent by Simmons (“Person Ten”) at 2:14 p.m in a Signal Chat including various Oath Keepers: “The[y] have taken ground at the capital[.] We need to regroup any members who are not on mission.”

The charging document listed 10 phone calls that Simmons exchanged between 1:59 p.m. and 2:33 p.m. with other Other Keepers. Eight calls were with Joshua James, one of the Oath Keepers facing charges. Two calls were with Rhodes, who was communicating separately with group members outside the Capitol.

While exchanging calls with Simmons, James traveled from the Willard Hotel, in downtown Washington—where he had been leading a security detail guarding Stone—to the Capitol. Around 2:30 p.m., James, along with two other Oath Keepers, drove golf carts through downtown “at times swerving around police cars,” according to prosecutors. On the way, another Oath Keeper with James stated: “We’re en route in a grand theft auto golf cart to the Capitol building right now…fucking war in the streets right now.” Around 2:40 pm, according to prosecutors, 10 Oath Keepers “forcibly entered the Capitol.”

About an hour and a half later, Simmons and Rhodes met 100 feet northeast of the Capitol Building with 11 of the Oath Keepers who had been inside, according to prosecutors. Simmons said this conversation was part of an effort to figure out what group members had done in the prior hours.

Simmons said that he did not tell anyone to enter the Capitol Building. He was the leader of Oath Keeper “security details” on January 6, he said, and nothing more. When the mob began storming the Capitol, he was near the Supreme Court, he said, where he had helped provide security for Latinos for Trump, and where Rhodes had been among some who spoke onstage.

Simmons explained that a five-minute call he had with Rhodes at 2:31 p.m., detailed in court documents, was about them trying to find each other outside the Capitol. He also claimed that many of his calls on the afternoon of January 6 did not go through. Some of the calls lasted several minutes, according to court documents.

“We didn’t know shit,” Simmons said. “The guys I was with, we didn’t know who was in the Capitol until later.” (Simmons didn’t say who he was with.) The Oath Keepers who did enter the Capitol, he said, “did that shit on their own.”

Simmons said he agreed to share what he knew with the FBI. “I answered everything they asked me,” he said. “I don’t feel like I did anything criminal.”

Simmons too, promotes this resume. He emphasized his military and security experience to distance himself from the less-credentialed Oath Keepers he led on January 6. “I’m not one of these guys that put on body armor and go play solider,” he said. “I do this for a living. That’s how I feed my people.”

An Army spokesman confirmed that Simmons served as a Combat Engineer from February 2003 to March 2006 and deployed to Iraq and Kuwait in 2005. But Mother Jones could not confirm multiple other claims Simmons made about his background.

Simmons said he worked for Blackwater in Iraq in 2006, but he provided no evidence of that. According to his LinkedIn profile, he worked for other security contractors, including the Blackwater successor company, Academi, in 2012 and 2013, which was also unverified. Simmons’ LinkedIn bio says he says he is employed by the Phillips Group, Inc., a national company that provides security services for businesses, but an employee at that firm reached by Mother Jones denied that Simmons has ever worked there.

Asked about Rhodes’ statements that Simmons is a police veteran, Simmons said that he worked as a police officer in Indianapolis as recently as 2020. The Metropolitan Police Department in Indianapolis, however, said they had no record of Simmons working there.