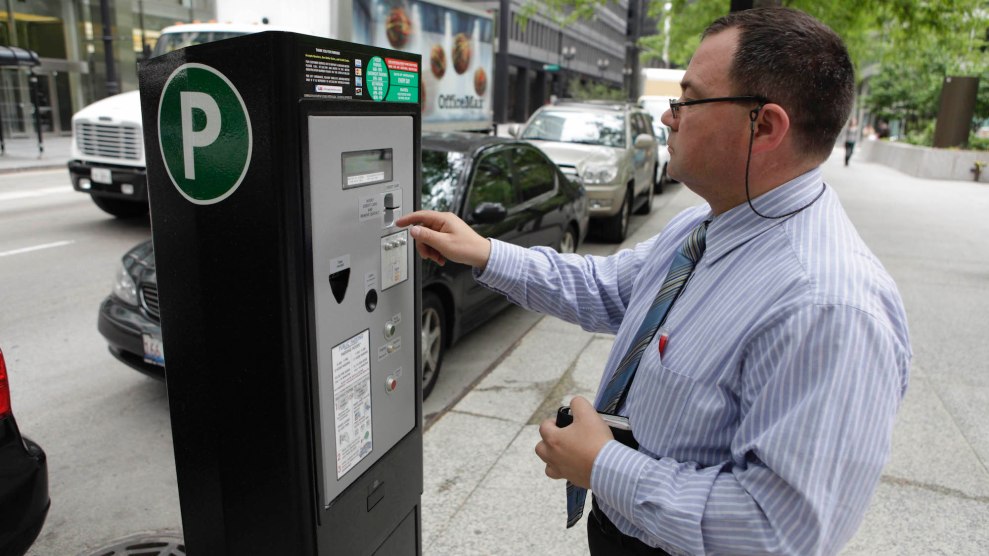 Chicago man Sicilia Giovanni feeding one of the city’s new parking meters in 2009. Until 2083, much of Chicago’s meter money will go to investors in Abu Dhabi as a result of a heavily criticized leasing deal announced in 2008. Charles Rex Arbogast/AP

Last week, President Biden and a bipartisan group of senators announced a major deal on infrastructure, agreeing to $1.2 trillion worth of spending on roads, public transit, and utilities. The exact details of the proposal are scant, as are clear plans on how to pay for it. But a preliminary list of nearly a dozen potential financing sources included something called “asset recycling”—a fancy term for a type of privatization that has long enticed Wall Street investors, while bringing frustration to local residents who are often left footing the bill.

The term “asset recycling” appears to have been coined in Australia, when in 2013 the country’s government launched a program aimed at funding new infrastructure by leasing existing public assets—like roads or electrical grids—to private companies. In recent years, institutional investors have pushed for programs like this in the United States, even raising billions to pursue infrastructure projects. These sorts of partnerships are framed as mutually beneficial—a money-maker for private investors, and a windfall for underfunded public goods. That win-win framing made its way into the Trump administration, when National Economic Council director Gary Cohn championed a proposal to pay states and localities a bonus for selling off public infrastructure. “Take a project you have right now, sell it off, privatize it, we know it will get maintained, and we’ll reward you for privatizing it,” he told executives in 2017.

Trump’s proposal never came to fruition. But in recent years, a number of states and localities have gone ahead with forms of privatization of local resources. Often, these public-private deals have not turned out well for the people who most depend on local infrastructure: the residents themselves. Here’s a roundup of some of the places where asset recycling and privatization have caused a lot more problems than they’ve solved.

Asset recycling came about in Australia in 2013 under Tony Abbott, an archconservative prime minister known to his critics as the “Mad Monk.” The plan was simple: To encourage states to sell or lease assets like ports, the federal government offered a bonus payment equal to 15 percent of the sale price. The money from the sale and the federal bonus would then be invested in new infrastructure projects.

The policy worked in the sense that states and territories did offload billions of dollars’ worth of assets. But some of the deals were highly controversial. A Chinese company, for example, got a 99-year lease to the Port of Darwin in Australia’s Northern Territory. Critics raised serious national security concerns about turning a strategically located port over to a foreign company, and they questioned why the territorial government leased the port before it had even come up with a plan for what to do with the windfall. Federal senators called the decision “weird” and “absurd.”

Joe Hockey, the federal treasurer responsible for selling asset recycling, considered the policy a huge success and pitched it to Trump administration officials after he became Australia’s ambassador to the United States. It worked. In 2017, President Trump’s budget called for using federal dollars to encourage privatization at the state and local level.

Four years later, the bipartisan infrastructure plan lists asset recycling as a way to help cover the cost of new infrastructure spending. This is much different from what Australia did. The idea now seems to be that the federal government will make money by selling its own assets, rather than losing money by paying states to sell theirs. One major problem is that the federal government doesn’t have much it can offload, since most of its assets are defense-related. Another is that privatization has a long record of going terrible awry in the United States.

In 2008, Mayor Richard Daley agreed to lease Chicago’s parking meters to a group of investors including Morgan Stanley and Abu Dhabi’s sovereign wealth fund. In exchange for paying the city $1.16 billion, they got control of city parking meters for 75 years. By the end of 2019, investors had already brought in $1.6 billion in revenue, nearly $500 million more than they’d paid for the lease, the Chicago Sun-Times reported.

The investors were able to bring in so much revenue because the deal required the city to increase parking fees by between 200 and 800 percent. The lease agreement also forces the city to pay Chicago Parking Meters LLC, the investors’ consortium, when things like parades and street fairs limit parking. Chicago is stuck with this arrangement until 2083.

In 2012, private equity giant KKR purchased a 90 percent stake in a joint venture with another company, Suez Environnement, to run the water and wastewater systems in Bayonne, New Jersey. Two years later, the companies inked a similar joint deal to operate the water system in Middletown, Pennsylvania—paying millions to each city for a lease on their water systems and promising to update their aging infrastructure.

Soon, the newly privatized water systems in both places led to enormous rate hikes and public ire. The New Jersey venture guaranteed the investors a profit of more than half a billion dollars over the 40-year life of the deal—amounting to an 11 percent annual return. To achieve these large gains, the private companies started hiking Bayonne residents’ water rates almost every year—8.5 percent the year the deal was signed, then another 4 percent, then 13.25 percent, 3.5 percent, and 4.5 percent. By 2019, water rates had gone up by more than half.

In Pennsylvania, the borough of Middletown grew so weary of the surcharges imposed by the deal to make up for lagging water sales that it sued Suez. But the town lost the suit, after a judge found that the contract allowed for this rate hike as a way for the company to recoup costs.

In 2011, Washington, DC-based private equity firm Carlyle Group purchased the water system in Missoula, Montana, for $102 million. Though Carlyle is a large global investment firm, this was its first-ever purchase of a water utility.

The city sold the system to Carlyle under an agreement that left open the possibility for the city to buy the system back in a few years. When the city attempted to exercise this option in 2013, Carlyle refused to sell, instead asking for a water rate increase that would net the investment firm an extra half million in revenue, annually.

In 2014, the city of Missoula filed a lawsuit against Carlyle to take back its water system under eminent domain laws. The suit—which the city ultimately won—claimed that the company had made false promises to the city in order to buy its water system and had then used the water utility to enrich itself, at the expense of maintenance to the system.

Before he became Trump’s vice president, Mike Pence—then Indiana’s governor—signed off on a 2014 partnership between his state and a European infrastructure investment firm that sounded ideal: a public-private effort to extend and update an Indiana highway, and to do it under budget and ahead of schedule.

Three weeks after the deal was inked, nine of the company’s officials were arrested, on charges that they had embezzled funds from a different private-public project, a high-speed rail expansion in Spain. Over the next two years, the company was forced off of projects in at least three countries. By 2017, the Indiana highway was two years behind schedule, with almost half of the road yet to be built. Traffic accidents and commute times on the incomplete highway had increased. Eventually, the state of Indiana took back control of the project and had to take on debt to finance its completion.