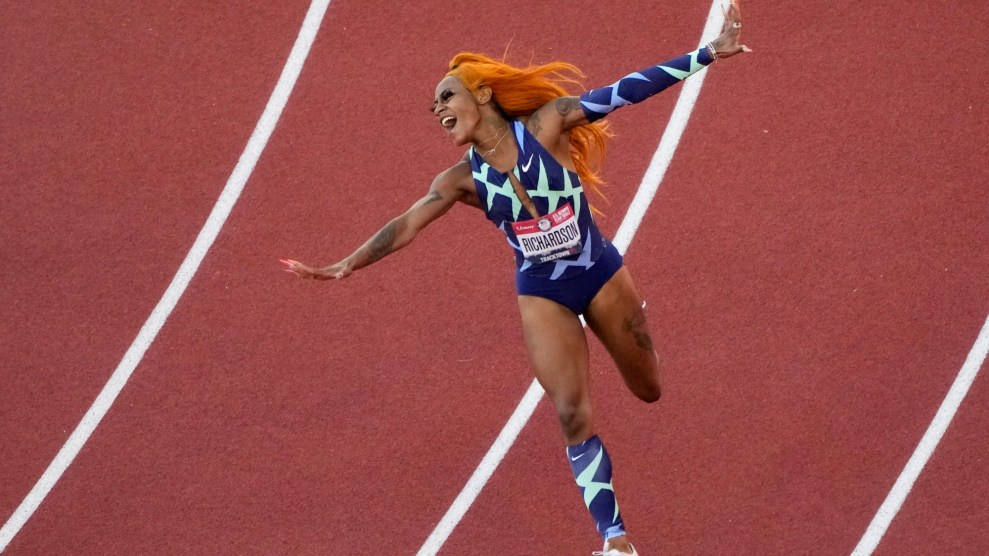 The governing bodies around the world responsible for determining who competes at the Olympics—and who doesn’t—seem to have it out for Black women.

In two weeks, what should have been the 2020 Summer Olympics will kick off in Tokyo, Japan, after being delayed a year by the coronavirus pandemic. Over the years, the international event that showcases athletes from all over the world and features a wide array of sports including gymnastics, running, track and field, and swimming, has not been without controversy, especially when it comes to Black competitors. In 1968, as the National Anthem played, sprinters Tommie Smith and John Carlos raised their hands in a Black power salute while they stood on the medaling stand. Fast forward to this year’s games, where the International Olympics Committee has banned all Black Lives Matter apparel and forms of protests during the event. And in recent weeks, different international organizations have advanced a number of archaic, racist, and sexist rules that seem to be harming Black women the most.

Late last month, for instance, Soul Cap, a company that makes swimming caps specifically for swimmers with Black hair that may be too voluminous to fit in the styles currently available, announced that their product had been rejected by the International Federation of Swimming, which is also known as FINA. This meant that the product could not be used by Black swimmers in the Olympics. In their decision, FINA said that “the athletes competing at the international events never used, neither require to use, caps of such size and configuration.” Not only was historical precedent the rationale, but also that the cap did not follow “the natural form of the head.”

The decision by FINA is part of a long, racist tradition that asserts the way hair grows out of Black women’s heads is not suitable for work, school, and other professional settings. Black hair has been politicized for as long as I can remember, and even during a time of so-called racial reckoning it still comes up. Just last year in Texas, one Houston school district suspended a student with dreadlocks. (The district did come under fire but decided to uphold its policy. A judge later ruled that the policy was discriminatory.) The problem is so pervasive that Black activists created the CROWN Act to protect Black people from hair discrimination. The law, an acronym for Creating a Respectful and Open World for Natural hair, is law in only 13 states.

FINA’s declaration that the cap was unsuitable also excludes Black swimmers who choose to not straighten or make their hair smaller with heat or chemicals. The Black Swimming Association responded, saying the decision “confirms the lack of diversity in elite swimming and the lack of urgency for change.” This rule that caps have to fit whatever FINA decides is “natural” signals to elite Black swimmers: We don’t want you here.

After the backlash, on July 2, FINA announced that it would reconsider its decision. “FINA is committed to ensuring that all aquatics athletes have access to appropriate swimwear for competition where this swimwear does not confer a competitive advantage,” the organization said in a statement. “FINA is currently reviewing the situation with regards to ‘Soul Cap’ and similar products, understanding the importance of inclusivity and representation.”

Around the same time international swimming organizations declared that Black hair is not “natural,” another sport was deciding what is and isn’t natural and acceptable concerning women’s hormones. Earlier this week Namibia’s National Olympic Committee banned Christine Mboma and Beatrice Masilingi from running the women’s 400-meter race. The move comes after the committee found that the two 18-year-old women from Namibia had naturally occurring testosterone levels that are, according to the rules, too high to compete as women. The two prodigies, who excel at longer distances, will have to settle for middle-distance races. The bans have been characterized as a toxic combination of racism and transphobia.

High level athletics is falling prey to a really horrendous mix of transphobia and misogynoir. If the best can't compete, the Olympics don't deserve to bear that name. https://t.co/38souSRmkb

These women are being punished for quite literally not presenting their gender in the way defined by a patriarchal society. What increasing scientific sophistication in understanding women’s complex biology should mean is an appreciation for its diversity—literally and figuratively—not a narrowing of what is deemed acceptable. The Olympic committee, however, would allow them to compete if they took drugs to lower their testosterone levels. They refused.

But while runners are allowed to take drugs to regulate their natural hormones, some drug use is punishable by being banished from competition altogether. Sha’Carri Richardson was a favorite to win the gold medal for the women’s 100-meter sprint in Tokyo this month. Then, on July 1, a drug test came back positive. No, she didn’t consume steroids to enhance her performance, she smoked some marijuana.

Richardson, who is 21-years-old, admitted to smoking after a reporter told her that her biological mother had died. (Richardson was raised by her grandmother.) “It sent me into a state of emotional panic,” she said in a television interview on the Today Show. “I didn’t know how to control my emotions or deal with my emotions during that time.” The IOC suspended her for 30 days— meaning her suspension wouldn’t be lifted until July 30, after the women’s 100-meter sprint. A loss, but theoretically, the Olympics would still be taking place and she could compete in other events. That’s when USA Track and Field did not list her on the team’s roster, dashing hopes for any Olympic medals for another four years.

Between Sha’Carri Richardson and this, the Olympics really are sending quite the message to black women https://t.co/1mMmNK37Qd

It’s so easy to declare “Rules are rules,” as fellow athlete and gymnast Dominique Dawes said this week, as did President Joe Biden, but what possible purpose does this rule really serve? Did smoking a little weed give her any kind of unfair advantage? No. Did she break the law? No. Richardson smoked in Oregon, where adults are legally allowed to partake. Simply put, it’s an archaic rule and, of course, it impacts vulnerable women.

Obviously, there have to be rules for the Olympics to ensure a fair and safe environment for the athletes. But weed would not enhance Richardson’s performance any more than a larger cap designed for Black women’s hair would enhance theirs. In the case of Mboma and Masilingi, the science isn’t even clear that higher testosterone levels make you a better competitor—and besides, no one would ask Tacko Fall, a 7′ 5″ NBA player to sit out of games because he’s naturally too tall.

All of these incidents about how the rules work and whom they harm may not seem to be connected. But taken together, they feel less like rules to ensure an equal, safe, and competitive environment for athletes and more like punishments unequally doled out, with Black women, once more, being singled out for special treatment.