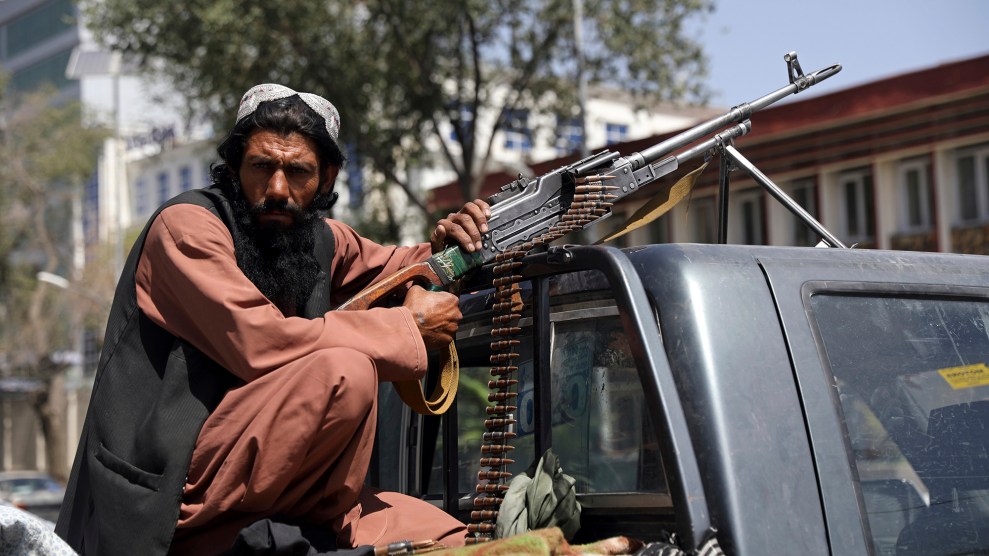 A Taliban fighter sits on the back of a vehicle with a machine gun in front of the main gate leading to the Afghan presidential palace in Kabul, Afghanistan, on Monday.Rahmat Gul/AP

A devastating report from the US government’s internal watchdog on the war in Afghanistan, coincidentally released just after the Afghan government collapsed in the face of a takeover by the Taliban, paints a bleak picture of the 20-year US campaign there marred by an incoherent strategy and the lack of a long-term plan.

As the Biden administration struggles to defend its slipshod management of the US exit from Afghanistan, the stateside blame game is already in full force. Republicans see an opportunity to hammer Biden while simultaneously downplaying or outright attempting to delete their own history and role in championing a hasty retreat. Biden administration officials are blaming intelligence failures and a lack of will from Afghan security forces, and intelligence officials are blaming the politicians.

But the new report from the Special Inspector General for Afghanistan Reconstruction (SIGAR) John Sopko—the official tasked by Congress with monitoring US government spending in Afghanistan—says there’s plenty of blame to go around. SIGAR issues an annual report on the state of the war in Afghanistan, and Sopko’s latest one, released at midnight on Monday night, not only delivers a blistering critique of US actions in Afghanistan but offers lessons for decision-makers for the next time the US government takes over a country and seeks to rebuild it.

“Twenty years later, much has improved, and much has not in Afghanistan,” Sopko writes. “If the goal was to rebuild and leave behind a country that can sustain itself and post little threat to the US national security interests, the overall picture is bleak.”

Sopko notes improvements in life expectancy, GDP, and literacy since the US invasion. But he adds, “Despite these gains, the key question is whether they are commensurate with the U.S. investment or sustainable after a U.S. drawdown. In SIGAR’s analysis, they are neither.”

Sopko writes that the myriad problems and challenges his office and other oversight bodies identified over 13 years—spanning 427 audits, 191 special project reports, 52 quarterly reports, and 10 lessons-learned reports—is “staggering.” Stephen Hadley, a former national security adviser to former President George W. Bush, who launched the war in Afghanistan in October 2001, told Sopko that the US government doesn’t “have a post-conflict stabilization model that works. Every time we have one of these things, it is a pick-up game. I don’t have confidence that if we did it again, we would do any better.”

Sopko’s report goes in depth on seven lessons from the failed campaign: incoherent strategy, timelines divorced from reality and past experience, unsustainable institutions and projects, poorly trained and inexperienced staffing (American and otherwise), persistent lack of security, a failure to understand and apply cultural context, and the inability to accurately measure results while simultaneously declaring “success.”

For years, Sopko’s office has issued detailed reports about corruption, ineptitude, and wasted money. Vice News recently highlighted examples emblematic of the American approach, such as a $36 million military base that was never used and the roughly $8.62 billion spent on counternarcotics operations between 2002 and 2017, only for Afghanistan to remain the world’s largest opium producer (as of 2018) and for opium poppy to remain the country’s top cash crop.

Sopko’s new report notes that even as policymakers say there’s not much appetite for missions on the scale of the 20-year Afghanistan effort, there are still reasons they should heed these lessons. Reconstruction missions are expensive—all war-related costs for Afghanistan, Iraq, and Pakistan over the last 20 years come to roughly $6.4 trillion—and “they usually go poorly,” Sopko writes.

“Widespread recognition that they go poorly has not prevented US officials from pursuing them,” he writes, and “[r]ebuilding countries mired in conflict is actually a continuous US government endeavor.” These missions “usually start small,” he adds, so it wouldn’t be hard for the United States to “slip down this slope again somewhere else and for the outcome to be similar to that of Afghanistan.”