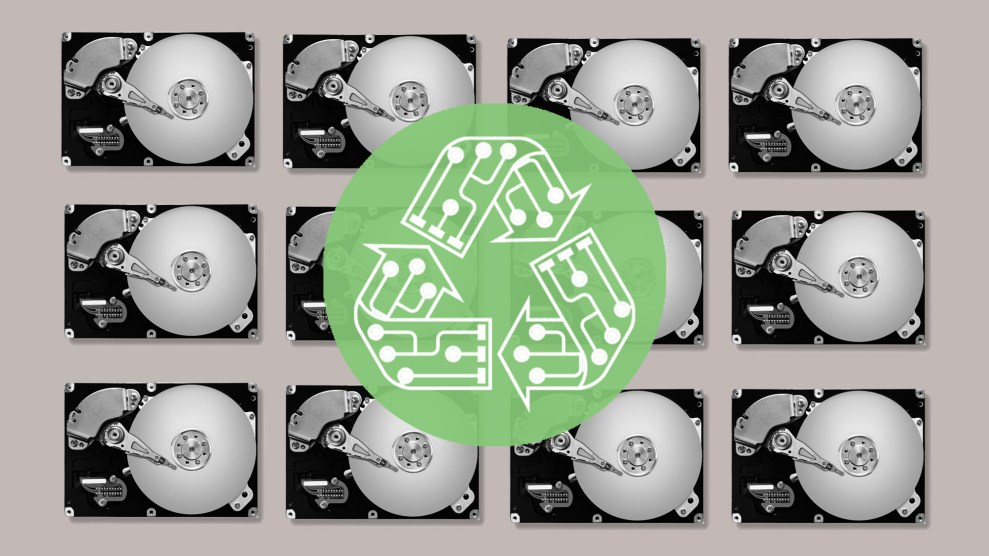 This story was originally published by Grist and is reproduced here as a part of the Climate Desk collaboration.

At a laboratory inside a Google data center in Mayes County, Oklahoma, researchers spent the fall of 2019 disassembling old hard disk drives by hand in order to extract a two-inch-long component known as the magnet assembly. Consisting of two powerful rare earth magnets, the magnet assembly is a critical muscle within the hard drive, controlling an actuator arm that allows the device to read and write data.

Over the course of six weeks, the scientists harvested 6,100 of these magnetic muscles, all of them effectively good as new. The magnets were then shipped to a hard drive manufacturing facility in Thailand, where they were placed into new drives and, eventually, redeployed to data centers around the world.

This is a far cry from what happens to the estimated 22 million hard disk drives that age out of North American data centers each year. Typically, when a data center operator swaps out old drives for new ones—as they do every three to five years—the discarded drives are unceremoniously shredded. The rare earth elements, which took significant energy and resources to mine and turn into magnets, are lost in a sea of aluminum scrap.

But for several years, Google and others in the tech industry have been quietly working to change that. Motivated by concerns about future rare earth metal supply shortages as well as the environmental toll of rare earth mining, which casts a cloud over their green credentials, tech companies, along with partners in academia and government, are exploring whether they can mine hard drives instead. Until now, these efforts have garnered little public attention. But they may get a boost under the Biden administration, which recently flagged government data center hard drives as a promising source of the rare earth elements America needs not just for data storage devices and consumer electronics, but also for energy technologies that are key to fighting climate change.

“Hard drive magnets are important because they contain neodymium and dysprosium, which are essential for electric vehicles and wind turbines,” Hongyue Jin, a scientist at the University of Arizona who studies rare earth recycling, told Grist. Of the 17 different rare earth elements, “these two are currently the most important and critical.”

Data centers, warehouses of computers that form the physical backbone of the internet, are a great place to find those elements. They are the world’s largest consumers of hard disk drives, which are one of the largest end uses for rare earth magnets. Unlike the hard drives inside personal computers, which tend to gather dust in peoples’ basements when they reach the end of their life, data center operators have strict protocols for collecting and disposing of old hard disk drives in order to protect data security.

“A hard drive sitting in your computer at home requires you as the consumer to take it to a recycler,” said Kali Frost, a doctoral student in industrial sustainability at Purdue University. “Data centers are already a supply of millions of hard drives. The companies operating those data centers want to handle them in the best way possible, and increasingly, optimize them for sustainability.”

The US alone generates nearly 17 percent of all used hard disk drives—the largest share globally—and researchers have estimated that if all of these data storage devices were recycled, they could supply more than 5 percent of all rare earth magnet demand outside of China, potentially helping meet the demand of the information technology sector as well as clean energy companies. A consortium of US researchers, tech companies, hardware manufacturers, and electronic waste recyclers has recently begun exploring exactly how those rare earths can be re-harvested and given a second life.

In 2019, these stakeholders published a report identifying a host of potential strategies, including wiping and re-using entire hard disk drives, removing and reusing the magnet assemblies, grinding up old hard drive magnets and using the powder to manufacture new ones, and extracting purified rare earth elements from shredded drives. Each of these strategies has its own challenges—removing magnet assemblies by hand is labor intensive; extracting rare earths from technology can be chemical or energy intensive and produce significant waste—and for any of them to be scaled up, there needs to be buy-in from numerous actors across global supply chains.

Making even the relatively minor supply chain adjustments needed to place used or recycled rare earth magnets inside new drives “is difficult,” Jin said. “And especially when you’ve got to start from some small amount with a new technology.”

Re-used magnet assemblies had a carbon footprint 86 percent lower than new ones, according to the study.

Still, some companies have begun taking the first steps. In 2018, Google, hard disk drive manufacturer Seagate, and electronics refurbisher Recontext (formerly Teleplan) conducted a small demonstration project that involved removing the magnet assemblies from six hard disk drives and placing them in new Seagate drives. This demonstration, Frost says, was the “catalyst” for the larger 2019 study in which 6,100 magnet assemblies were extracted from Seagate hard drives in a Google data center before being inserted into new hard drives in a Seagate manufacturing facility. Frost, who led the 2019 study, believes it is the largest demonstration of its kind ever done.

The results, which will be published in a forthcoming edition of the journal Resources, Conservation, and Recycling, not only showed that rare earth magnets could be harvested and reused at larger scale, but that there were significant environmental benefits to doing so: Overall, re-used magnet assemblies had a carbon footprint 86 percent lower than new ones, according to the study. Frost says that this estimate conservatively took into account the energy mix of the local power grid where the data center operated. Considering Google’s near round-the-clock renewable energy usage at this particular data center, the carbon footprint of the reused magnets was even lower.

Google declined to say whether it has any follow-up projects in the works but pointed Grist toward its publicly announced goal of developing a scalable rare earth magnet recycling process. Ines Sousa, the supplier environmental impact program manager at Google and a co-author on the new study, says there are a few challenges that still need to be overcome before that’s a reality.

These include the need for extreme cleanliness during magnet recycling “as modern hard drives are very sensitive to small particles,” and the fact that hard drives are constantly changing, resulting in new magnet designs every few years.

“There is an opportunity to make magnet design constant between generations so the reuse process can scale,” Sousa said.

Seagate spokesperson Greg Belloni told Grist that the company is “committed to working to solve the complexity” of rare earth recycling in “close collaboration with customers.” Another of its customers, computer maker Dell, is exploring a different recycling approach.

In 2019, Dell launched a pilot program with Seagate and Recontext to harvest magnets from computer hard drives collected via a Dell take-back program, crush them up, extract the rare earths, and use them to form new magnets. To date, some 19,000 pounds of rare earth magnets have been harvested for recycling via this collaboration. The project “remains a pilot program as we continue to look for ways to scale within our own operations,” Dell spokesperson Mel Derome told Grist.

It may be years before rare earth magnets are recycled en masse, but the Biden administration could help accelerate those efforts.

While it may be years before rare earth magnets are being recycled en masse using any approach, the Biden administration could help to accelerate these efforts. Through the Critical Materials Institute at Ames National Laboratory, the federal government already funds several projects focused on developing cleaner and more efficient processes for recycling rare earth elements from magnets. In a recent report on strengthening supply chain resilience, administration officials wrote that the 4,000 US government-operated data centers represent a “near term opportunity” to harvest rare earth magnets using this type of federally funded research and development.

Jin says that such a program could bring down barriers to recycling across the tech industry, similar to how the Biden administration’s plan to electrify the federal fleet could give the wider electric vehicle market a boost. It could also lay the groundwork for the electric vehicle sector to develop its own rare earth magnet recycling approaches.

“Establishing a new process for 6,000 drives is not really commercially viable,” Jin said, referring to the number of hard drive magnets recycled in the Google study. “But if we talk about 4,000 data centers, it’s more viable to change the supply chain and implement new reuse and recycling pathways. So I am really happy to hear that.”