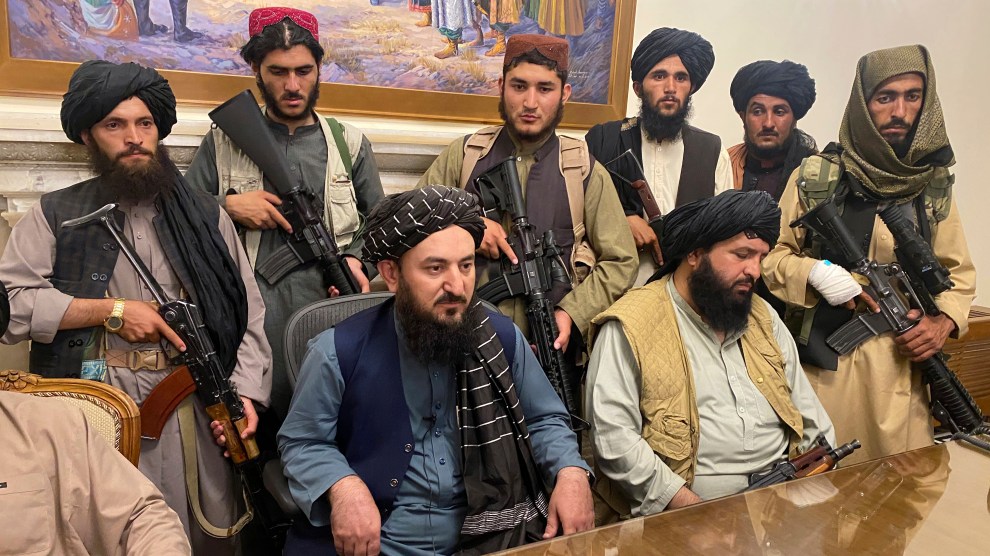 The weeks ahead will bring exhaustive debate about the grim developments in Afghanistan and how the Biden administration handled the final withdrawal of US forces from the so-called “graveyard of empires” after two decades of war. But various reporting has already made clear that the peace “deal” the Trump administration pursued with the Taliban in early 2020 set the stage for Afghanistan’s perilous governmental collapse.

The Trump deal brokered in Doha, Qatar, in February 2020 sought to create a power-sharing agreement between the Taliban and the Afghan government led by President Ashraf Ghani—and apparently hinged in part on fakery. According to a report from Defense One late Wednesday, former acting US Defense Secretary Chris Miller, who served during Trump’s final three months in office, now says the Trump administration never really intended to withdraw all US forces. Despite President Trump’s repeated declarations about ending the war, the true plan, according to Miller, was to squeeze Ghani into agreeing to a deal that heavily favored the Taliban and ultimately would leave in place a counterterrorism force of 800 or more American personnel. Miller went to Kabul for talks in December 2020, where he found Ghani to be “gracious and respectful” before things took a an ominous turn:

The tone of the discussions changed when Miller met with Ghani’s vice president, Amrullah Saleh, who had also served in key intelligence roles over the years.

The U.S. delegation and their Afghan counterparts didn’t talk strategy or go into any details about what lay ahead during the meetings, Miller said. The participants already seemed to know the bleak facts. “It would not have been appropriate to say ‘Is your Army going to collapse?’ But of course we were all thinking that.”

These were not the first indications that Taliban leaders were emboldened by Trump administration moves. According to the Washington Post, a series of negotiated surrenders began across Afghanistan in early 2020, shortly after Trump announced the US would be leaving: “The deals…were often described by Afghan officials as cease-fires, but Taliban leaders were in fact offering money in exchange for government forces to hand over their weapons, according to an Afghan officer and a U.S. official. Over the next year and a half, the meetings advanced to the district level and then rapidly on to provincial capitals, culminating in a breathtaking series of negotiated surrenders by government forces, according to interviews with more than a dozen Afghan officers, police, special operations troops and other soldiers.”

The Taliban was easily able to capitalize on the uncertainty that arose from the February 2020 deal reached in Doha, as beleaguered Afghan forces and corrupt local officials realized that American air power and other military support were likely to greatly diminish. According to an Afghan special forces officer cited by the Post, some Afghans were glad to take the Taliban’s money while others “saw the U.S. commitment to a full withdrawal as an ‘assurance’ that the militants would return to power in Afghanistan and wanted to secure their place on the winning side.”

Long before Saleh sounded the alarm to Miller in late 2020, meanwhile, the Afghan vice president had warned other top Trump officials about rising danger from the Taliban, including a campaign of assassinations that targeted Afghan elites and killed hundreds, among them a prominent journalist, military lawyer, and a female Supreme Court justice. The New Yorker’s Dexter Filkins reported in March that Saleh “told me that Taliban commanders, meeting in Pakistan, mapped out the campaign [in early 2020]. Saleh said that he passed a warning to Secretary of State Mike Pompeo and Secretary of Defense Mark Esper before the United States made the deal with the Taliban. (The State Department says that it has no record of this.) ‘We told them exactly what was going to happen,’ Saleh said. Pompeo and Esper were undeterred.”

Remarkably, the Trump White House appeared to believe they could achieve stability by handing most of the power over to the Taliban. “The whole policy strategy going forward was ‘Ghani is going to have to deal with the Taliban,’” Miller told Defense One. “And it wasn’t going to be a 50-50 split between the Afghan government and Taliban. We knew that. It was going to be 75-25 [majority Taliban], and then you flip this thing into an interim government.”

The strategy included the Trump administration working to spring senior Taliban leader Abdul Ghani Baradar from prison in Pakistan; following Baradar’s release, Pompeo met and posed for photos with him, including during talks in November 2020. Trump himself, eager to be recorded by history as the president who ended the war, at one point had envisioned hosting peace accords with the Taliban at Camp David. For their part, Taliban leaders made it known they wanted to see Trump reelected.

With the geopolitical stakes rising and the plights of thousands of stranded Americans and an untold number of Afghan refugees hanging in the balance, the final chapter of the war is far from finished. The unfolding crisis poses enormous challenges for President Biden; as commander in chief, responsibility for the chaotic and dangerous US exit rests with him, as he acknowledged himself in a speech on Monday from the White House. But to whatever degree Biden will ultimately be judged as having risen to the occasion or failed it, his predecessor played an unmistakably key role in creating a historic foreign policy crisis.