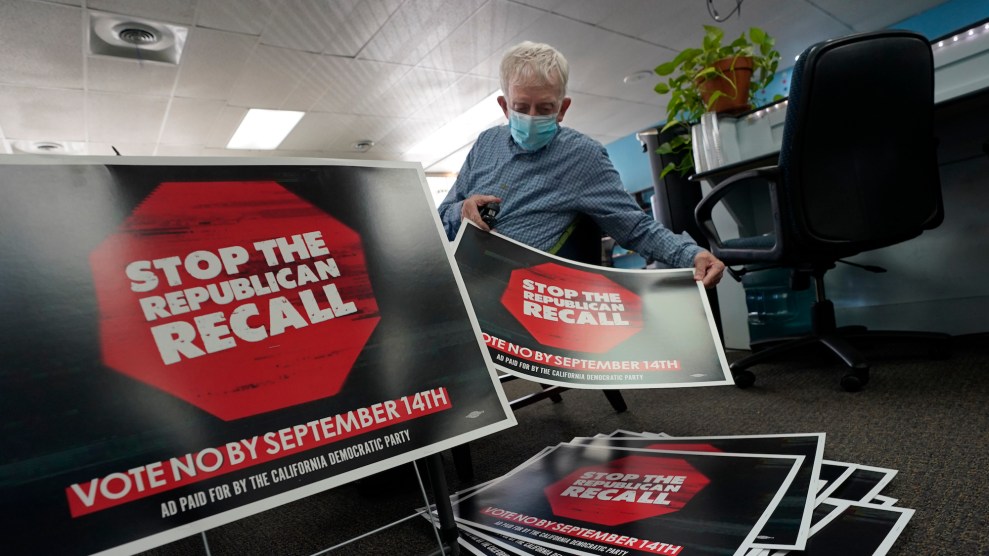 Recall elections are ostensibly designed to give citizens an opportunity to change the course of state politics from the bottom up. But when it comes to who is financing California’s recall battle, there is little to suggest much grassroots fervor. In fact, small donors are virtually absent from the process.

Heading into next month’s recall election, California Gov. Gavin Newsom has an enormous cash advantage over the hodgepodge group of conservative activists trying to unseat him. (In order to prevail, a majority of California voters will need to vote in favor of the recall on September 14; if that happens, the write-in candidate with the most votes will be declared the winner.) At last count, both sides in the recall fight had collectively raised more than $65 million, but nearly 90 percent of that—$58 million—has flowed to groups supporting Newsom. The California governor does have one big advantage in the money race. Since he is not technically a candidate, his backers are not constrained by spending limits, which only apply to those running for office (Newsom is already in office). The pro-recall effort has raised just $7.7 million.

That doesn’t include the money raised by individual candidates trying to unseat Newsom. The top six GOP challengers running to replace him have raised a combined $17.7 million. John Cox, a California businessman who lately has been polling around 6 percent, has the largest war chest—$7.6 million, but the bulk of that ($6.9 million) has come from his own pocket. The current Republican front-runner, Larry Elder, a controversial conservative radio host who is polling around 19 percent, has managed to raise about $6 million. The other Republican candidates have raised far less.

Little of the money funding either side of the recall battle or the campaigns of the GOP candidates is from your average citizens. For instance, just 3 percent of the cash pouring into the general recall fight was donated by people who gave less than $100—the official definition of a small donor in California. For context, in the most recent national election, Joe Biden and Donald Trump respectively raised about 38 percent and 48 percent of their contributions from small donors.

Newsom has never attracted huge grassroots appeal—in his 2018 election, he raised about $27.6 million, with only 9 percent coming from small donors. That’s a dismal number, but better than the roughly 2 percent of small donors Newsom’s anti-recall effort has claimed.

Jessica Levinson a professor who specializes in campaign finance and election law at Loyola Law School’s Public Service Institute, in Los Angeles, says that small donor numbers are usually something campaigns brag about as a sign of their momentum, and that’s not happening here.

“For a normal election, you’d want to use the small donors as a talking point, ‘Look, I have support from people across the economic spectrum!'” she says. “In this case, nobody is really caring about that narrative. It does feel like a rich person’s game.”

The top donors to Newsom’s anti-recall effort include Netflix CEO and Democratic megadonor Reed Hastings and his wife, who have together contributed $3 million. At least eight unions representing public sector employees have each given more than $1 million to his Newsom. The only pro-recall donor to chip in more than $1 million—excluding Cox—is southern California real estate developer Geoffrey Palmer. Palmer, who has been dubbed one of Los Angeles’ most prolific builders—and also one its most controversial, for his role in fighting affordable housing mandates— fundraised heavily for Donald Trump and put in $1.2 million into the pro-recall campaign, but after him the list of major conservative donors to the recall drops off steeply.

In early 2021, $500,000 flowed into one of several pro-recall committees from a company called Prov. 3:9 LLC (a Biblical reference pointing to the line “Honor the Lord with your wealth, with the first fruits of all your crops”). The use of an LLC initially obscured the donor behind the money. But after a furor over the influx of “dark money,” John Kruger—another southern California businessman—came forward as the contributor, citing his opposition to Newsom’s strong anti-COVID efforts,  specifically the governor’s restrictions on indoor events that limited religious gatherings. Kruger has previously been a prominent conservative donor in local politics and active in promoting charter schools.

California has among the strictest campaign finance disclosure rules in the country, but earlier this year, a legal effort by groups associated with Charles Koch’s dark money network won a significant victory against the state’s campaign finance regulators when the Supreme Court agreed that the state could no longer compel the disclosure of donors to secretive dark money groups. But neither the Koch network nor any of the other large conservative dark money outfits have appeared to show much interest in the recall.

All told, dark money doesn’t seem like a huge factor in the recall. Levinson says that many of the donations, especially on Newsom’s side, have seemed like they are mostly for show. Only recently did the recall begin to look like a significant threat to Newsom, yet all through the spring wealthy individuals and unions were dropping huge checks.

“I think the donors want everyone to know they’re against the recall and they really want Newsom to know they’re giving big money,” she says. “I think on both sides people are proud of their donations. It’s performative. They want this to be out in the open. If there weren’t disclosure requirements people would be trumpeting their support either way.”

September 2 is the last deadline to report fundraising totals before the recall on the 14th. Levinson says she expects the latest round of disclosures may show a spike in giving. With voters already casting mail-in ballots, and the race suddenly looking remarkably close, donors may be giving for more than just appearances.