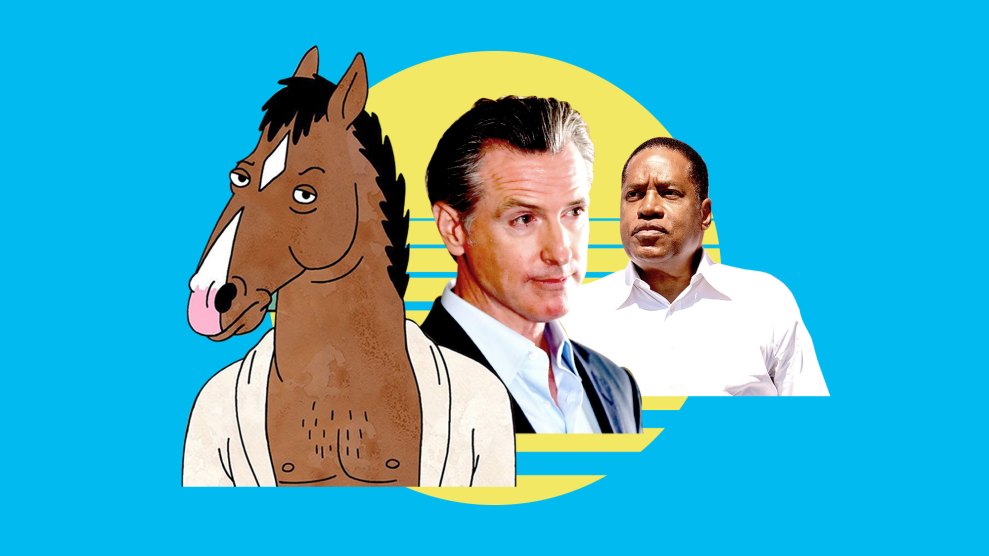 When California announced in February that enough signatures were gathered to recall Democratic Gov. Gavin Newsom, I decided to look up the rules and regulations for such an election. The convoluted nature of the process (even though this is about recalling him, his name does not appear on the ballot?) intrigued me, and I was reminded immediately of BoJack Horseman, a cartoon for adults on Netflix. In case you might have missed the first three seasons, let me bring you up to speed. The anti-hero is an anthropomorphized depressed horse who stars in Horsin’ Around, an amalgamation of the family sitcoms that dominated the 1990s.

But season 4 has a special storyline. Mr. Peanutbutter—a loveable yellow labrador—has launched a recall effort against the state’s governor Woodcharles “Woodchuck” Coodchuck-Berkowitz, who is a well-educated groundhog. When Mr. Peanutbutter fails to reach the signature threshold, his human ex-wife, and campaign manager, Katrina, lobbies for a constitutional amendment that will allow Mr. Peanutbutter to challenge Gov. Coodchuck-Berkowitz to a ski race instead. (Could the show’s creators possibly be lampooning California’s recall process?)

I may not be from California, but even from a distance of 3,000 miles, the way the state allows recall elections is baffling. For starters, the petition to recall a statewide elected official, like, say, Gov. Newsom, only has to have 12 percent of the total number of votes most recently cast for the office. For Newsom’s recall, petitioners needed approximately 1.49 million signatures. They got 1.71 million. Because there’s no limit to how many people can run, there are more than 40 names on the ballot, including such bold-face names as right-wing radio host Larry Elder, former Olympian and former Kardashian Caitlyn Jenner, and Kevin Praffath landlord-turned-YouTube influencer.

Voters must respond to two questions on the ballot. Should Gov. Newsom be recalled, and if you voted yes, who should replace him?  In the very crowded field, Elder has approximately 25 percent support but is leading the pack. But while Mr. Peanutbutter was just a friendly buffoon who just wanted to be adored, Elder believes in abolishing the minimum wage, has been accused of sexual harassment, and is skeptical of climate change. Given all this, somehow the recall election in a show where animals and humans can fall in love and get married doesn’t seem like it requires such an imaginative leap.

Somehow the recall election in a show where animals and humans can fall in love and get married doesn’t seem like it requires such an imaginative leap.

Does Elder actually have a chance of winning? Though California is a solidly blue state in federal elections, the ridiculously complicated recall process means that should enough voters vote to recall Newsom, and enough voters choose Elder as his replacement, the idiosyncratic talk show host could actually become governor. It’s happened before. In 2003, Arnold Schwarzenegger won a recall election against then-governor Gray Davis with only 48.6 percent of the vote.

Let’s suppose Elder assumes the governorship. His first action likely would be to rescind COVID mandates and restrictions. Should 88-year old Sen. Dianne Feinstein somehow succumb to age or infirmity when he is in office, he would pick this Democratic senator’s replacement, tipping the balance of the US Senate, as my colleague Lil Kalish details here. Democrats in California have a supermajority in the legislature, so it’d be hard for Elder to pass much, if any, legislation.

Let’s return to the more rational BoJack universe, where Coodchuck-Berkowitz finally wins the election and all is well. But not before a series of calamities ensue including someone else accidentally winning the ski race, Mr. Peanutbutter causing an earthquake by fracking underneath his own house, celebrity cannibalism, and a scandal over a candidate’s hatred of avocado. In real life, polls are pointing towards a Newsom victory—but even then, there will be no happy ending, as there was in BoJack.

Elder has already begun making noise about voter fraud, a variation on the theme of the Republican’s cherished Big Lie that resulted in the January 6 insurrection at the US Capitol. The Republican Party will continue to undermine democracy by framing his loss as more evidence that the only way a right-wing bullshitter could lose an election is if it’s stolen from him. No matter the outcome, democracy will grow even more fragile. Wouldn’t an interspecies ski race just make much more sense?