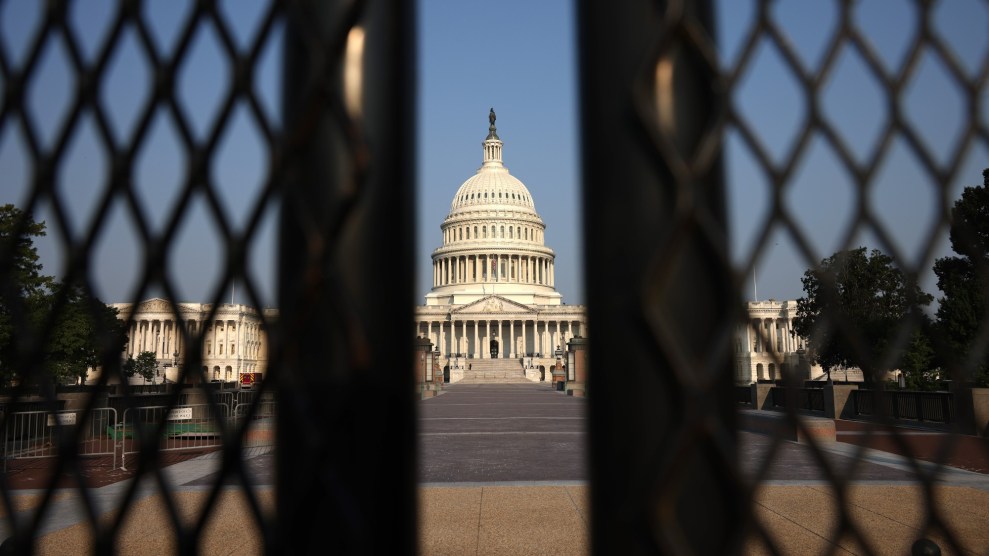 High-profile extremist groups are sending mixed signals about whether their members will actually show up to a DC rally this month intended to demand “justice” for people who have been charged with taking part in the January 6 attack on the US Capitol—but officials in Washington say that they aren’t taking any chances.

“If you rally in DC right now, you’re an idiot and you’re going to get people thrown in jail or worse.”

A group led by Matt Braynard, a former Trump campaign employee, is seeking a permit for up to 500 people to demonstrate in front of the Capitol on September 18 for a so-called #JusticeForJ6 protest. The planned rally is part of a persistent effort by Trump backers to downplay the events of January 6. Braynard has said the upcoming demonstration will push back on the “the phony narrative that there was an insurrection” and has claimed the crowd that day was “largely peaceful.” Though a large majority of the more than 600 people charged with taking part in the attack face minor charges and were released on bail, some conservative commentators have falsely asserted that most of the defendants remain in jail. Many on the right, including Braynard, have also embraced Donald Trump’s false claims that he was cheated out of an election victory, the same lie that incited the insurrection.

Law enforcement officials, caught off guard in January, are bracing for the prospect of violence. DC police have said they “will be fully prepared.” The US Capitol Police are reportedly considering reinstalling a fence around the Capitol complex. An intelligence assessment by the force, Roll Call reported Tuesday, states that although “outwardly Matt Braynard has instructed attendees to remain peaceful, given the propensity for this group to attract domestic extremists, their support for the insurrectionists, and their continued challenges to democratic institutions, it is not unreasonable to plan for violent altercations with those associated with this demonstration.”

The Associated Press, citing federal intelligence findings, reported last week that far-right groups including the Proud Boys and Oath Keepers are planning to attend the rally. That has heightened concerns in Washington, since members of both groups are being prosecuted for allegedly taking part in the January 6 attack and conspiring beforehand to interfere with the certification of President Joe Biden’s victory.

Publicly, however, members of those groups and other right-wing influencers deny any plans to mass in DC, and they’re trying to dissuade their followers from showing up. “I do not know of any specific plan to attend, other than what we are watching the media fabricate,” Kellye SoRelle, a lawyer for the Oath Keepers and confidante of the group’s founder, Stewart Rhodes, told Mother Jones.

Through a Telegram account, the Proud Boys also disputed the idea that group members planned to attend en mass and suggested the rally was a law enforcement trap. “We aren’t going and you shouldn’t either because [everybody is] going to jail. Sounds like bait,” the group warned.

“If you rally in DC right now, you’re an idiot and you’re going to get people thrown in jail or worse,” another message said. Proud Boy leader Henry “Enrique” Tarrio, as he arrived in DC on Monday to begin serving a five-month sentence for property destruction and weapons charges, said that he hasn’t “seen a single Proud Boy say they’re actually gonna go.”

Some of the Proud Boys Telegram groups tried to get ahead of any potential violence by sharing a message that read, “Whatever this rally is in DC, it definitely isn’t going to be a Proud Boy rally. No doubt there will be some boomers in black and yellow gear calling themselves Proud Boys though.”

Ron Watkins, the co-founder of 8chan, the key imageboard in facilitating the QAnon conspiracy movement, issued a similar message on his Telegram own channel, calling the event a likely “false flag” and saying that he hopes none of his followers attend. A prominent QAnon Telegram channel with more than 100,000 followers and other pro-Trump and pro-QAnon channels with large followings reposted Watkins’ message.

Others on the online right are spreading similar messages off Telegram. Gateway Pundit blogger Jim Hoft speculated that the event could be “FBI manufactured.” The far-right social media site Gab urged its users not to attend. “Do not take the bait,” the platform posted on its Twitter account. “They are losing the narrative on January 6th so this is why the CIA mockingbird media is pushing this. No one serious or smart is going.”

The remnants of The_Donald subreddit, which has moved between homes since being banned from Reddit, was a large hub for planning in advance of the original January 6 riot. But a recent search of the community yielded few results for the September 18 rally. Most of those that do show up call it a false flag and encourage others not to attend.

According to Jared Holt, a research fellow at the Atlantic Council’s Digital Forensic Research Lab who tracks far-right extremism online, these developments don’t bode well for the event’s organizers. “I’ve seen maybe a couple of threads on [right-wing forums] or comments here or there. But at the moment, there’s not much to support the idea that this will get enough momentum to even scratch the surface of what happened on January 6,” Holt said.

Despite the warnings from far-right influencers, some are still coming. According to the Washington Post, Braynard’s Look Ahead America predicts that 700 people will attend, which is up from the group’s initial estimate of 500 in its permit request.

The Harrington Hotel, a Proud Boys favorite, is completely sold out of rooms for the weekend of September 18 and 19, according to its bookings website. A hotel employee confirmed this over the phone.

Contrary to Tarrio’s claims, another Proud Boy, speaking at an event in Portland in August, urged group members and supporters to attend the DC rally.

It’s unclear how much control these groups’ leaders have over their members. The Proud Boys and the Oath Keepers have always been loosely organized, and they have splintered further amid January 6 prosecutions. Some Oath Keepers have pleaded guilty and are cooperating with the federal investigation into the attack. A revelation that Tarrio is a longtime law enforcement informant—which Tarrio has denied—has also reportedly divided the Proud Boys.