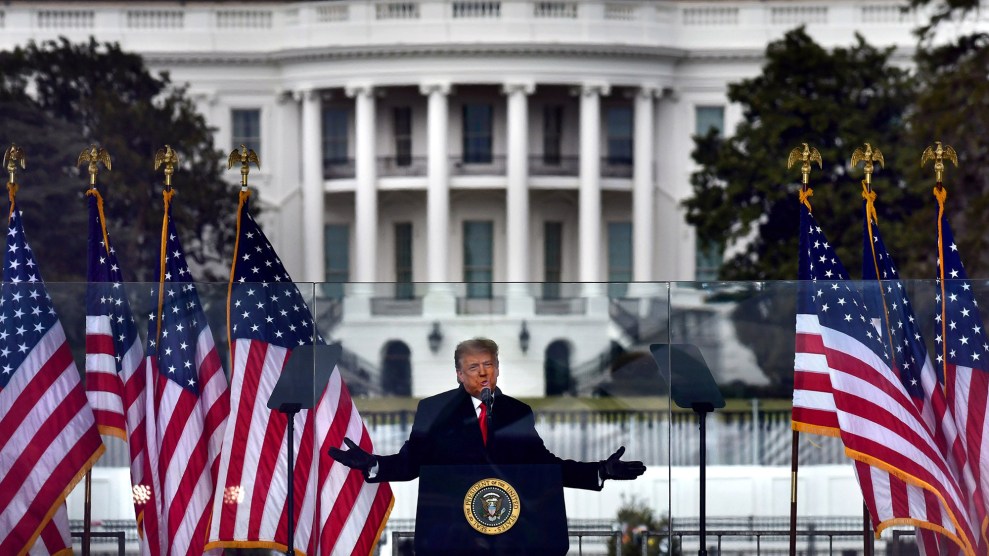 There was big news this week on what is known ominously and euphemistically as “the democracy beat,” and like all such news, it was bad. On Tuesday, CNN published a two-page memo written by a lawyer for then-President Donald Trump’s re-election campaign during the run-up to the January 6 certification of the Electoral College results. In six concise bullet-points, the memo outlined a process by which Vice President Mike Pence could use his powers on January 6 to throw out the electors from seven states that President Joe Biden won in the 2020 election. The plan counted on Republicans in those states to submit competing sets of electors, based on the false and fabricated premise that Trump had somehow won those states.

The memo’s author, John Eastman, is a lawyer—at the time, he was even a tenured professor at Chapman University School of Law—but what he created is not a legal document. It is by its nature extra-legal: It is a blueprint for a coup.

Eastman anticipated the possibility that some people would be mad. “Howls, of course, from the Democrats,” he predicted in bullet-point four, immediately following the line, “Pence then gavels President Trump as re-elected.” Yeah, man, no kidding.

It is a little weird to read all these months later about something that was also plain as day at the time. Thursday marked the one-year anniversary of a Barton Gellman article in The Atlantic that laid out the strategy that Trump, with Eastman and others’ help, would pursue. Mother Jones and others covered closely the efforts from the Trump campaign to throw out votes in courts and disenfranchise entire states. My colleague Becca Andrews was even in Atlanta on December 14 when Georgia Republicans showed up at the Capitol to endorse their own pretend slate of Trump electors—a bizarre sideshow that was nonetheless part of a scattershot, collective pretext for the strategy Eastman spelled out. January 6 happened on live TV. But what was described on those couple of pages is what all the stunts and subterfuge were building up to—notes, as it were, on a criminal fucking conspiracy.

There have not been a lot of attempts to depose elected American presidents in my lifetime, though I’m only 34. Not knowing for sure what happens when you dissociate “peaceful transfer of power” from “a society entirely predicated on it,” I sort of think this is a pretty big deal. This is a break-the-glass moment, as some have said, only someone else already broke the glass and took the axe and is running around with it.

But it is not such a big deal, apparently, if you watch network TV news. On Wednesday, Media Matters’ Matt Gertz reported that the total number of minutes devoted to the story on either the morning or evening editions of ABC, NBC, or CBS News in the first two days after the memo was published was zero. “In fact,” Gertz wrote, “the only national network broadcasts to mention Trump’s coup memo were the late-night variety shows hosted by Jimmy Kimmel, Stephen Colbert, and Seth Meyers.”

Americans get their news from lots of places, including from Late Night shows. And the networks are, broadly, still covering the aftermath of the January 6 insurrection, including the latest moves by the House Select Committee to subpoena former top Trump aides. But the network TV news shutout on the Eastman memo does speak to a reluctance to directly engage with this new political reality.

It is ironic, given the prevalence of the word “dogwhistle” in popular discourse to refer to things that everyone can actually hear, but there is something about the specific pitch of the threat that perhaps strains the capacity of some institutions to process. They’re not programmed to take on problems like this—it disturbs the comfortable equilibrium that defines a lot of political media. Republicans come on to speak to one side of things, and Democrats come on (slightly less often) to speak to the other side of things, and there are arguments, and sometimes people win and sometimes people lose. But there is always, basically, a sense that everyone is sort of acting within the constraints of the same known universe. There are scandals, too. (In fact, that universe thrives on scandal!) But those scandals never really veer into the realm of the existential.

But what happened at the close of Trump’s presidency, and seems likely to happen again if we continue mostly ignoring it, is an existential problem. There’s no equilibrium here. A majority of Republican members of Congress supported an effort to overturn the election. They’re almost all still in office. A majority of the country’s Republican attorneys general backed that same plan. (Including, yes, the South Dakota attorney general who killed a man and fled the scene with the victim’s glasses in his car.) They’re all still in power as well. (The South Dakota attorney general got off with a fine.) The people who thought that the biggest problem with January 6 was that the game wasn’t fixed sooner are strengthening their grip on the GOP and on institutions of state and local government, and everyone else with a future in the party is getting out of their way.

The day of the insurrection at the Capitol, I remember thinking—naively but in my defense very angrily—that there might even be expulsions from Congress as a result, that those complicit would have to pay. I might feel better now if anyone had. But while there were howls, of course, from Democrats, such chatter quickly died down on Capitol Hill. The only people who have suffered any recriminations are the Republicans in Congress who, however belatedly, stood up to all this. Last week, Ohio Rep. Anthony Gonzalez, one of just 10 House Republicans to support impeaching the president for inciting the insurrection, announced his retirement, citing the “toxic dynamics” within his party. Gonzalez’s personal security budget had gone up since the vote, and he was being challenged by a former Trump aide, Max Miller. The ex-president had already come to the district to campaign against him.

This is all an enormous crisis of legitimacy for a large swath of government at many different levels, which means it’s an enormous challenge for political media and everyone else. I don’t really know how we get out of it. But I guess I’d start with acknowledging the fact that the axe is missing.

Correction: An earlier version of this article misidentified the state represented by Rep. Anthony Gonzalez.