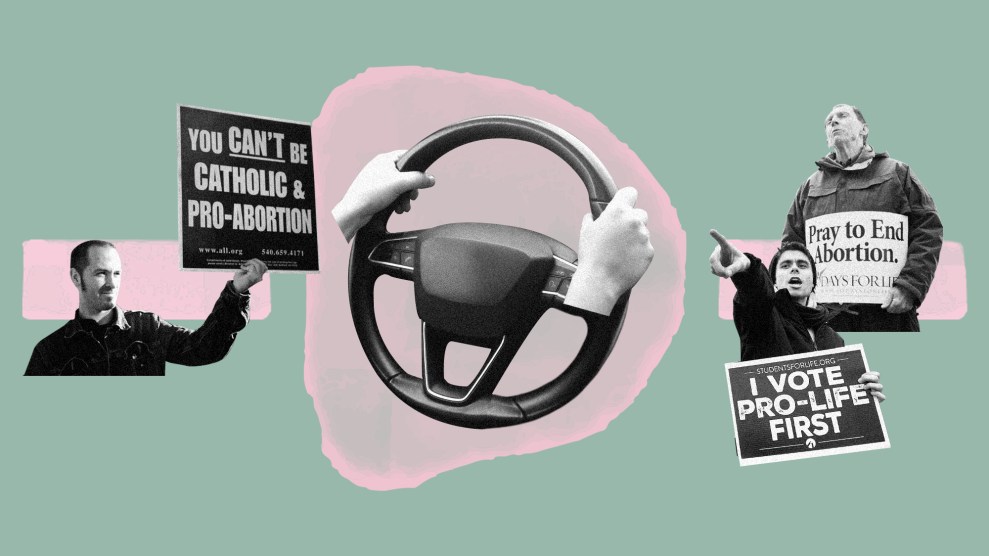 Last month, Texas legislators passed Senate Bill 8, banning abortions after the sixth week of pregnancy. For the Austin-based Bridge Collective, which provides transportation and accommodations to people in central Texas seeking abortions, that forced a radical shift in operations. Many members began coordinating out-of-state trips for their clients. Some traveled to neighboring New Mexico and Colorado, others as far as Florida or California—wherever they could get an appointment. While the Justice Department pursues an injunction barring enforcement of the law, Texans seeking abortions wait in limbo.

I spoke with Rachel, a core member and volunteer driver at the Bridge Collective, about their work. Concerned about potential prosecution under SB 8, she asked to be identified by her first name only. Last week, she drove one client on a three-day trip to a neighboring state to safely get an abortion. The process, from the client’s initial outreach to hitting the road, took less than a week. Here, Rachel recounts that journey.

As far as I could tell from conversations I had with this person, they were pretty far along, clearly past six weeks. They were in their mid-20s, from the San Antonio area. They described their family as very conservative Catholics, so this kind of thing would not have been kosher at all.

We didn’t get to where we were staying until 7 at night, so with stops and everything it was a solid 12 hours. We stopped every two hours. I wanted to make sure this person felt good and everything, but at the same time, this is not a road trip with your girlfriend. We’re trying to get where we need to go.

This particular clinic is wonderful because they have escorts. Normally, what I do is drop the person off in a way that mitigates them having to deal with agitators. This time, there were at least 10: lots of old white people with signs with false information about pregnancy. There’s been times when I’ve had to turn the music up really loud so we can’t hear the blasphemous things they’re saying. Or we’ll pull in as far away from the agitators as we can.

The protesters are so gnarly. They were pretty annoying at the clinic. They’re legally not allowed on the actual property. It was disgusting—pro-gun, pro-Trump, pro-life. I think the first thing I saw on the back of a vehicle after I dropped the client off was like “Take my guns from my cold dead hands.”

They’re very invasive. I’ve had them knock on my windows on my vehicle. I’ve had them yell at me. One guy blocked the driveway when I was trying to get out at one point.

I dropped them off around 10 a.m. and picked them up at 6 p.m. I explored for a little while. I read a book called Set Boundaries, Find Peace just to occupy time. I have numerous things I do to ground myself. I leaned hard on doing yoga. In some ways, these trips can feel anticlimactic. I mean, we drive there, hang out, go to the appointment, and drive back. I’m basically a really, really nice Uber driver who gets people where they need to go.

Since the ban, everyone’s come out of the woodwork to support us. I’ve been with Bridge since January of this year. I’m 31. I’m a sixth-generation Texan. I wanted to get back into driving people to their abortion appointments and helping people with access to abortion care.

I don’t know if it takes anything special to be a doula, but for this trip I definitely provided this person with emotional, mental, and physical support. They were having a lot of conflicting issues and I basically said that I could be someone they could talk to if they needed. They expressed that they didn’t have anyone to speak to. I was like, All right, well, I’m able to open up space if you want to talk about what’s going on with you, and I can listen. I practice active listening and being present because I think this person needed an ear. I don’t really think they needed anything else. Other than, clearly, an abortion.

The biggest thing I’ve noticed since the ban is that people’s fears are coming true: They’re not going to be able to get to their appointments. That was always there. It’s been an underlying thing in Texas since forever. I definitely noticed longer times for appointments because all of the clinics have been inundated. Appointment times have gotten longer. My client pointed out that everyone they spoke with that day was from Texas. Sorry, Greg Abbott, we’re still getting abortions.

Abortions don’t stop just because you make it more difficult. It doesn’t mean that people stop needing them. We’re just going to have to go a hell of a lot further to do it. But we’re still going to do it and there are still people out there willing to help people who need abortions get access, no matter how long the drive.

It was already difficult before SB 8. It’s a really emotionally and mentally trying time for people we’re helping, and to have to make a whole thing out of it other than, you know, just going down the street to your local clinic, it’s so much harder.

The ride home was a bit different. They were just resting as I was driving.