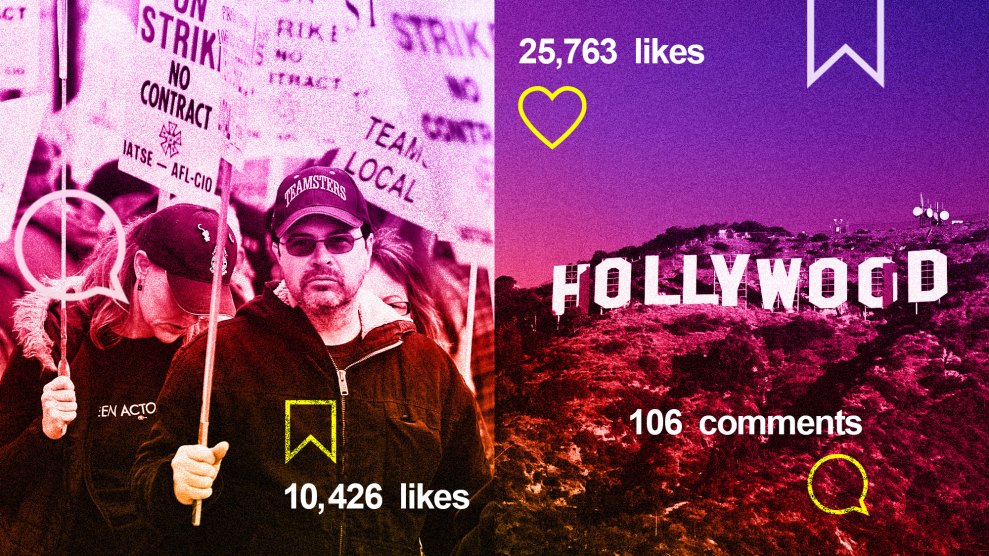 Terry Dresbach, a costume designer and longstanding member of IATSE Local 892, has spent three decades working in what she considers to be an abusive system. Makeup artists, set builders, and camera operators—the blue-collar labor force that keeps Hollywood running—work inhuman hours, and then entertainment companies profit massively while pretending they can’t afford to do better.

That status quo has held throughout Dresbach’s time working on shows like Buffy the Vampire Slayer and Outlander, a STARZ drama that earned her two Emmy nominations. She noticed it changing after IATSE Stories, an Instagram account set up by a Brooklyn-based lighting technician named Ben Gottlieb, began posting anonymous accounts of the conditions faced by his colleagues—the 14-hour-plus days, the drives home spent with the A/C blasting to stay awake, the family lives strained or preemptively abandoned. “It opened a floodgate,” Dresbach says about the impact those stories had. “That was the powder keg,” says Andy Young, a member of Local 700, the Motion Picture Editors Guild.

The energy generated by the account, which now has more than 160,000 followers, helped lead to the first strike authorization vote in the 128-year-history of the International Alliance of Theatrical Stage Employees. On Saturday, IATSE announced a deal with producers that averted a strike set to begin Monday. Now about 60,000 of IATSE’s members must decide whether to ratify the contract, or force their leaders back to the negotiating table—which could result in IATSE shutting down many Hollywood productions by going on strike for the first time in its history.

They’ll be voting in the immediate aftermath of the death of Halyna Hutchins, a cinematographer and Local 600 member, who was killed Thursday by a prop gun fired on a New Mexico set by Alec Baldwin. The tragedy has drawn even more attention to the often unsafe work conditions faced by IATSE’s members, and the ways in which the industry’s business model is responsible for them.

Because yes, we DO NOT need real guns on set. They use real guns because it’s much more expensive to do gun barrel explosion and firing effects with post-production CGI. Every single threat to our health and safety is another way they maximize profit margins #IASolidarity

When IATSE first announced the strike authorization vote, Young, who is 30 and recently married, was nervous about losing his paycheck, but he told me he knew voting yes was the right thing to do. He expected the strike authorization to barely pass. The results were stunning to Dresbach, too, whose mother was persecuted for her political views and work as a labor organizer in the McCarthy era. In a union where past contracts had been ratified with turnout rates of less than 40 percent, nearly 90 percent of IATSE members cast ballots. Ninety-eight percent of them voted to authorize the strike.

When IATSE President Matthew Loeb announced that the union had reached a last-0minute deal with producers on Saturday, he called it a “Hollywood ending.” Many, if not most, of IATSE’s goals going into contract negotiations had been achieved. The deal provided for, among other things, significant pay raises for the industry’s lowest workers, a larger share of streaming revenue, and capping work days at 14 hours.

But many of his members saw it differently. On the IATSE Stories Instagram page, people quickly urged other union members to vote no. Young took to Twitter to criticize the deal as well, arguing that 14-hour work days were hardly something to celebrate. Every IATSE member he talked to was planning to vote no. One common demand was to limit work days to 12 hours or less, which was not something the union appeared to be planning to bargain for at the start of contract negotiations.

Yet others called it the best agreement they’d seen in decades-long careers. Some still were waiting to get more detailed information from IATSE and their local unions. When I spoke Sunday to Fae Weichsel, a member of IATSE Local 600 who works as a first assistant camera, they pointed out that IATSE had given nothing up, while securing many of their key demands. Weichsel, a co-chair of the IATSE’s Eastern Region Young Workers Committee, was leaning toward supporting the deal at the time. But they still had mixed emotions after having been ready to strike. When we were in touch again on Friday, after the news broke that Hutchins died, Weichsel told me she was now leaning toward a no vote.

In the coming weeks, the agreement will be put to a vote in which the winner is determined via an electoral-college-like system in which each local is allocated a set number of votes that are allocated on a winner-take-all basis. It’s not at all clear how things will go.

In 2018, the popular vote ended up being about 53 percent in favor and 47 percent against ratification. That was largely because Local 700, the editors guild local Young joined this year, overwhelmingly opposed it after Executive Director Cathy Repola argued it did too little to improve conditions in the industry. Repola, who is still at Local 700, is held in high regard by her members. This time around she is reportedly planning to recommend a yes vote.

“I really feel like right now is our moment in order to make this change.”

Young is now waiting to hear what Repola has to say at an upcoming union meeting. Whether the contract is ratified or not, he feels that the decision not to strike has thrown a “wet blanket” on the energy members generated. He worries what that will mean for the next round of negotiations in three years. If the culmination of everyone rallying together is another “so-so deal” getting ratified, “I think that’s gonna squash enthusiasm,” Young says. “I really feel like right now is our moment in order to make this change.” Weischel is more optimistic about the next deal. “I do feel that this one is setting us up for a really strong negotiation,” they say. “This contract is all gains for us and [comes] from a complete place of strength.”

Dresbach is still deciding how to vote. She believes IATSE leaders did a good job achieving what they set out to do at the start of the negotiations. Still, she fears this contract could mean costumer designers will have to keep working 17-hour days because they show up before others on set. Regardless of how the ratification vote goes, the question for her is what happens afterwards.

She stresses that dismantling a broken system will take more than one round of contract negotiations. “When we go back to work, do we go back to our old ways where they tell us to leap off a cliff in the dark and we do it because we’re afraid we’re gonna get fired?” she asks. “Or do we turn around and say, ‘I don’t think so’?”

This piece has been updated to reflected changes in voting opinion after news circulated that Halyna Hutchins, a cinematographer and Local 600 member, was killed on set when Alec Baldwin shot a prop gun.