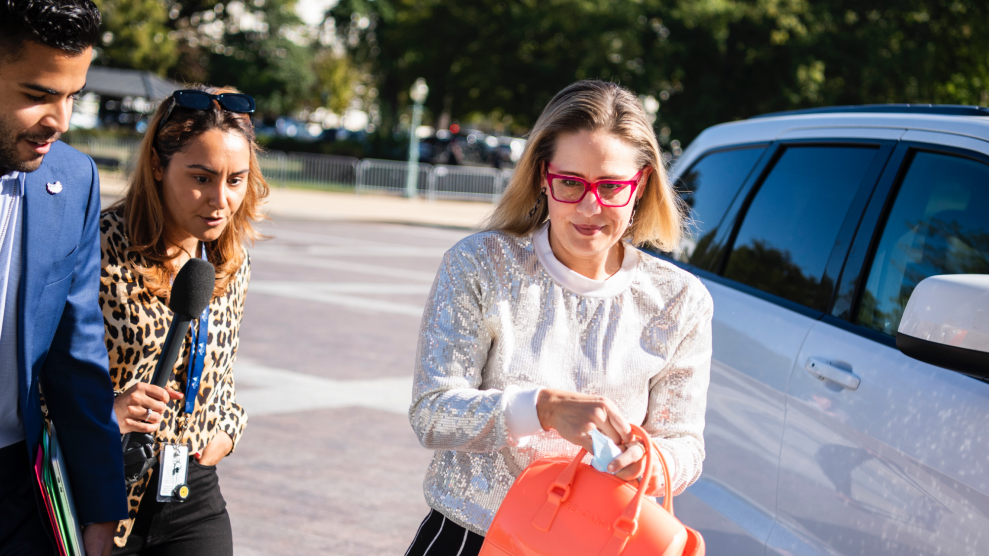 Negotiations over President Joe Biden’s sweeping domestic agenda hit the skids this month when Sen. Kyrsten Sinema (D-Ariz.) made clear she’d refuse to back tax hikes on corporations to pay for an expected $2 trillion in spending.

With that revenue-raising door closing, a window to a onetime progressive pipedream appears to be opening: Sinema’s intransigence could push more Democrats to embrace significant new taxes on billionaires as a means to subsidize child care, offer paid family leave, increase the social safety net, and combat climate change.

Until now, soaking the rich has mostly been a stance belonging to the party’s progressive wing.

A so-called “billionaires’ tax” envisioned by Sen. Ron Wyden (D-Ore.) would force the mega-rich to pay annual taxes based on the growing value of their assets, regardless of whether those assets are sold, the Washington Post reports. The measure would automatically apply to just 700 people—who make up .000002 percent of the American population—and others lucky enough to make over $100 million three years running. The plan would raise hundreds of billions of dollars, money that could replace what Democrats expected to net from the corporate taxes Sinema has so far nixed.

While the proposal’s specifics remain in flux, Wyden and White House officials say they are cautiously optimistic that centrist lawmakers like Sinema will come to back it, according to the Post. If they do, it would be a marked shift: Soaking the truly rich has, for the most part, been a stance belonging to the progressive wing of the party.

Sen. Elizabeth Warren (D-Mass.) opened her 2020 presidential bid with a “two-cent” wealth tax, a proposal under which families worth more than $50 million would pay two percent on every dollar of their net worth above that amount. (Billionaires would have paid six cents on every dollar over $1 billion.) Warren estimated the measure would generate $3.75 trillion over ten years, enough to pay for a platform that called for tuition-free public college; universal health, child care, and pre-K; and cancelling at least a portion of most borrowers’ student debt.

At the time, the campaign proposal attracted criticism far and wide—from economists who cautioned it would be difficult to enforce and, of course, from billionaires who didn’t want to pay more. But Warren exited the primary confident her proposal had made an impact. “No one knew what a wealth tax was a year ago,” the former Harvard professor and bankruptcy expert told reporters the morning of the South Carolina primary, as her time in the contest drew to a close. “This a culmination of a lifetime of work.” This week, news emerged that one of her newest pupils appears to be Sinema, who has recently spent time discussing the intricacies of Wyden’s proposal with the Massachusetts senator.

One thing that gives progressives confidence is polling numbers that consistently find support for increasing taxes on the very richest. A March 2021 poll from the liberal Data for Progress firm, found backing from 68 percent of voters. A September poll from Future Majority looking at voters in 37 swing House districts found that support for Biden’s economic agenda increased from 52 percent to 69 percent when voters learned the package would be funded by taxing billionaires.

“Warren’s wealth tax was smart policy and politics, and we are seeing that wisdom play out now in the 9th inning of the reconciliation negotiations,” says Lindsay Owens, a former Warren staffer and the executive director of the Groundwork Collaborative, a liberal think tank. “You need revenue and widespread popularity. The wealth tax has both, in spades.”

Even so, the surprising reemergence of the billionaires’ tax has sparked panic among some moderate Democrats, who openly hope growing talk of turning to the measure will actually pressure Sinema and her business allies to reconsider backing the corporate rate hikes they recently rejected. “The irony is, with some of these alternatives that are coming out there, it may be the very business community that’s rushing to the barricades, saying, ‘Please, give us rates,’” Sen. Mark Warner (D-Va.), a moderate on the Senate Finance committee, told the New York Times.

If new, larger wealth taxes come to pass, Sinema, one of the party’s foremost moderates, will have pushed her party toward the core tax agenda Warren put out during her progressive-focused presidential run.