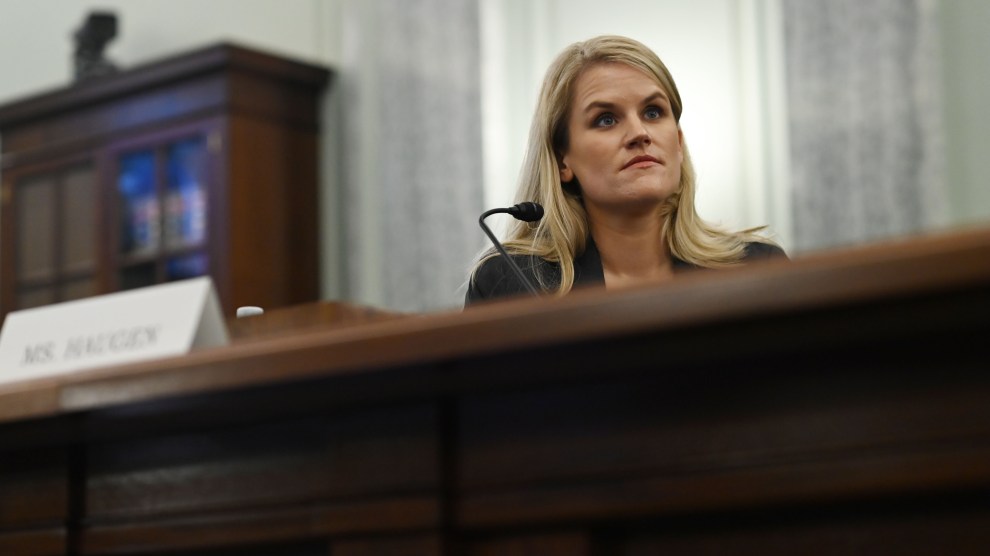 Leaks are generally good. Transparency of powerful institutions is generally good. The person, or people, who provide them are generally doing a noble thing. Frances Haugen, the former Facebook employee who leaked a damning trove of the social media giant’s internal documents, is no exception.

The files that she helped bring to light in the Wall Street Journal show Facebook’s own knowledge and deception about matters that the company’s critics had long suspected. Its applications contributed to teens’ mental health problems—something the company knew but misled Congress about. Facebook said its rules were equally applied but it privately drew special carveouts for high-profile figures. The company rolled back protections that it had put in place after the election, just in time to help the spread of disinformation and violent rhetoric ahead of the January 6 Capitol riot. The list goes on.

During a hearing with members of the Senate Commerce Committee on Tuesday, senators asked Haugen several times for suggestions about what to do. Haugen’s answers included some incredibly weak tea:

As Daniel Hanley, an analyst at the left-leaning think-tank Open Markets, pointed out on Twitter, none of these solutions would change the structures that produced Facebook and all of the problems it has created. Indeed, she specifically argued against structural solutions like breaking up Facebook.*

So basically, all of @FrancesHaugen's recommendations to Congress about how to fix Facebook from the revelations she disclosed are more oversight and information to Congress – nothing structural. whomp whomp.

Facebook’s own lobbyists couldn’t have come up with a better answer than the one Haugen proposed about having former Facebook staffers work in a special government unit that would regulate Facebook. This is known as a “revolving door”—a corporate dream and a nightmare for everyone else.

There’s an entire genre of stories about the problem. Just two weeks ago, the New York Times published a story on how “the biggest accounting firms encourage their top tax lawyers to do stints at the Treasury” to influence policies to benefit accounting firms. Former employees tend to be loyal to the companies they’ve worked for, especially if their old company stands to give them another job after their government work.

If you believe that Facebook is producing significant harm, the solutions that follow should probably be significant as well. As Evan Greer, deputy director of Fight for the Future, told me, rectifying Facebook’s invasive privacy practices could require “a privacy law strong enough to effectively kill Facebook’s current business model.”

“It’s hard to directly regulate algorithms, but Congress can make it illegal for companies like Facebook and YouTube to harvest the massive amount of data they use to fuel those algorithms,” Greer suggested, referring to Haugen’s warnings on how Facebook’s algorithms lead people to harmful content.

In Haugen’s worldview, it doesn’t need to come to that. A few smart people, ones like Haugen who already worked at Facebook, can work within the current system to fix everything they broke. While it would be wise to heed her warnings and revelations, it would not be as wise to heed what she’s advocating.

Correction: This sentence has been updated to correctly attribute Haugen’s position.