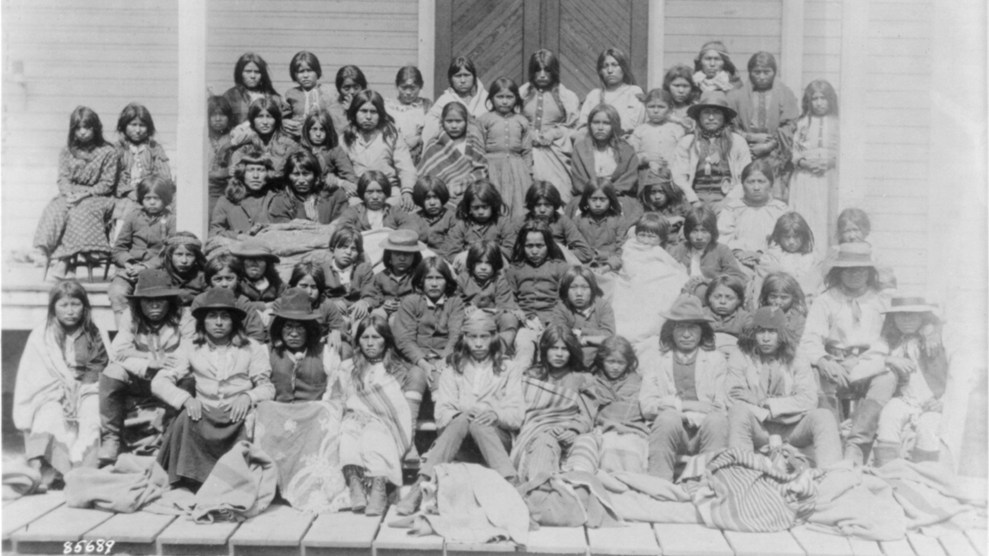 November is my annual season of ambivalence. Although I love autumn, its poignant air of loss and the promise of renewal, it has the bittersweet distinction of also being Native American history month.

Every year, for as long as I can remember, editors of the legacy press, as well as church and school groups, have asked me to regale their audiences with Native American history. Inevitably these requests seek to frame Indigenous peoples as denizens of a long-ago past, as occupants of a fantasy world that has almost nothing to do with our lived experiences.

This annual exercise has taken on a wearying sameness: It’s the month of explaining Indians to white people. Typically they tell me they want to know more about Native people, our lives today, how to honor our culture and be allies. But almost always this means they want me to present generic versions of Native dance, crafts, spirituality; to help them participate in ceremonies and drumming, identify their power animals, and become shamans. In short, they want to celebrate an Indian who never was, one who soothes their settler souls.

I often relent and offer up a few words encouraging folks to read pertinent books and conduct a bit of research on their own. Such presentations are far more mindful of white fragility than I’d prefer. Nevertheless, what I say can be shattering to them, like watching a 5-year-old’s face crumble as she’s told Santa Claus isn’t real.

This year, the requests have been especially fraught. Prompted by discoveries of hundreds of children’s graves at the boarding schools that Native children were coerced into by the governments of Canada and the United States, white people want me to describe these atrocities and my own family’s experience as survivors. For reasons that are difficult for me to fathom, this is a new story for White America. They are shocked, horrified, and weirdly eager for appalling details.

Native people, myself included, are shocked that it’s taken so long for non-Natives to acknowledge this grim history, one we’ve been hollering about for decades, only to be met with deafening silence or denial.

For this year’s Native American history month, I have a modest proposal. Help us bring out our dead.

My grandmother, mother, aunts and uncles, and many cousins are all boarding school survivors. Theirs was run by the Catholic church, but its curriculum and culture were modeled on federal schools such as the Carlisle Indian Industrial School, which also inspired those in Canada where the bodies of children were first disinterred in June.

After Canada passed the Indian Act in 1876, which authorized the government to regulate and administer the affairs of Indigenous peoples, Nicholas Flood Davin, a member of Parliament, was tasked with finding a means to educate the country’s Indigenous peoples. Davin visited the Carlisle Indian Industrial School in 1879 and was impressed with how US Army Lt. Richard Pratt, the school’s founder, used education to force assimilation onto Native people.

Before founding Carlisle, Pratt ran a prison school for Natives at Fort Marion in Florida, where he developed a pedagogical style of systematically destroying Native culture, language, and family connections with the goal of absorbing Native children into mainstream America. His motto, “Kill the Indian, save the man,” helped shape the regimented military style that defined most Native boarding schools.

US boarding schools were often woefully underfunded. Deplorable conditions—poor food, clothing, housing—contributed to the spread of disease and sometimes death. According to researchers, many schools failed to keep accurate records of student deaths. Parents of those who died were often notified after the child’s burial, if they were notified at all; few could afford travel expenses to pick up their children’s remains.

Unlike Canada, where the 2008 Indian Residential Schools Settlement Agreement and subsequent Truth and Reconciliation Act helped unlock church and government records, there is little definitive data on the number of schools or children who attended or died at schools in the United States. Researchers estimate that more than twice as many Indian boarding schools operated in the United States as in Canada.

Interior Secretary Deb Haaland, the only Indigenous person to serve at the Cabinet level, recently announced her agency’s creation of the Federal Indian Boarding School Truth Initiative. Under the initiative, the Bureau of Indian Affairs is instructed to collect records of the boarding school program, with special attention to deaths and burial sites. The initiative also includes securing documentation from Christian denominations that operated schools.

Haaland’s initiative represents the first official effort to own up to the boarding school era and recognize its enduring impact on Native peoples. It’s also the first concrete commitment by the US government to investigate and acknowledge the history of assimilationist policies.

“For more than a century, the Department was responsible for operating or overseeing Indian boarding schools across the U.S.,” the initiative states. “While it may be difficult to learn of the traumas suffered in the boarding school era, understanding its impacts on communities today cannot occur without acknowledging that painful history.”

“Only by acknowledging the past can we work toward a future we are all proud to embrace.”

But as of yet, it’s pretty vague. There are no specific plans to perform archeological investigations of boarding school sites, nor is there any funding appropriated. And, crucially, the United States has never apologized for its boarding school policies.

The enormity of my family’s trauma is simply too deep to be reduced to the indignity of a benign synopsis offered to a gathering of blissfully ignorant and well-intentioned, always well-intentioned, White people. In the end, those intentions remain firmly centered in a White world where White saviors pave the way for healing and reconciliation on terms that don’t look too deeply into their own culpability and benefits associated with colonialism.

There is a childlike quality to the White fragility and entitlement, even among the most woke persons, that almost fills me with pity. Until I remember how much power they hold and how, if they really wanted, they could make an enormous difference in the world.

For this year’s Native American history month, therefore, I have a modest proposal. Help us bring out our dead.

A bill establishing the Truth and Healing Commission on Indian Boarding School Policy in the U.S. Act was introduced in Congress again this year. It would compel the investigation of America’s boarding school history and actions to address the policy’s intergenerational impact.

But rather than waiting for lawmakers to rule, churches, universities, and communities who truly want to be allies can support Indigenous efforts to locate boarding schools and cemeteries. Guided entirely by Indigenous peoples, allies can pay for all costs associated with this work—be it disinterring remains and repatriating them to their homes, building memorials, or holding ceremonies to honor the dead.

Allies can do this work without centering themselves in any way. They can facilitate healing and reconciliation by simply being of service to their Indigenous neighbors. The Genoa Indian School Digital Reconciliation Project—a collaboration between the University of Nebraska at Lincoln, the Genoa Foundation, and members of Nebraska tribes, including descendants of those sent to that boarding school—is a great model. By combing through newspaper archives and school newsletters, the project has identified more than 100 children who died at the school and is working to locate their graves.

Although not nearly as entertaining as learning how to be a shaman or reading aloud land acknowledgements in suitably lofty tones, a nationwide effort to find all the graves at all the schools would represent authentic reckoning. It’s a Native American history month activity I could support wholeheartedly and without rancor, one that might represent a true step forward.

Adapted in part from “We Won’t Forget About the Children” in Indian Country Today, where Mary Annette Pember is a national correspondent.