Editor’s note: This must-read essay from David Corn first appeared in his new newsletter, This Land. Given the importance of covering right-wing disinformation and David’s spot-on analysis, we want to make sure as many readers as possible have a chance to see it. This Land is a newsletter written by David twice a week that provides behind-the-scenes stories about politics and media; his unvarnished take on the events of the day; film, books, television, and music recommendations; interactive audience features; and more. Subscribing costs just $5 a month—but right now you can sign up for a free 30-day trial of This Land here.

A few months ago, a friend proposed writing a book jointly about “creeping fascism” in the Trump era. I was already pursuing another book project—more on that later—so I took a pass. But I wondered—as I have over the past few years—about the application of the f-word to our current political situation. No doubt, Donald Trump is a narcissistic, fearmongering, demagogic authoritarian with no respect for democratic values and norms, and his success in flimflamming tens of millions of Americans has been alarming. His efforts to overturn the 2020 election—which led to his fanatics storming Congress—and his ongoing campaign to delegitimize it do pose a serious threat to the nation. But fascism? Would that be rhetorically hyperbolic? Does hurling that loaded word make one seem hysterical? Many Trump foes have compared his use of disinformation, propaganda, and hate to what occurred in Nazi Germany. But I’ve questioned whether that is an effective course. Does playing the Hitler card wake up those not paying attention or does it alienate people?

Enter Tucker Carlson. Pushing the racist “replacement theory“and vaccination resistance on his nightly Fox News show is apparently not a full-time job for him. He has started producing long-form pieces for the network. The first one, to be released today, promises to reveal the “true story” behind the January 6 insurrectionist attack on the Capitol that Trump incited. Look at the trailer for this propaganda: 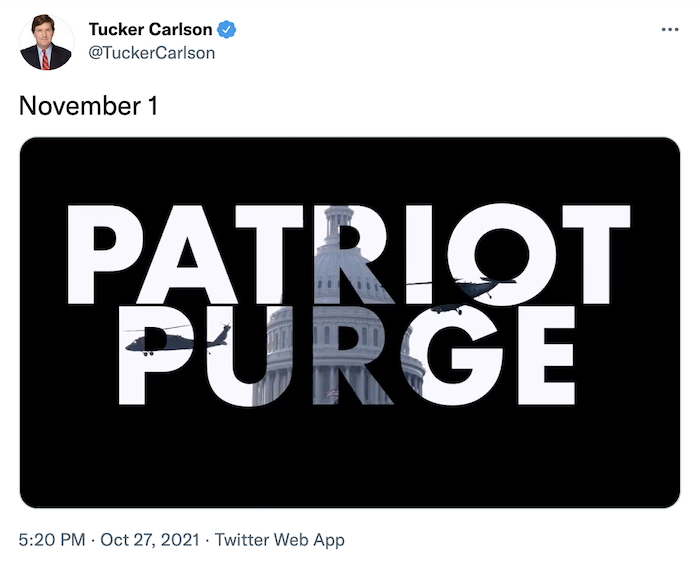 The 1/6 assault, the show suggests, was a “false flag” operation, meaning it was orchestrated by the US government to create a ruse to justify an outright Deep State war on conservatives—a “patriot purge.” Carlson features someone who claims that “the left is hunting the right and sticking them in Guantanamo Bay.” The “new” war on terrorism, he tells us, is aimed at white Americans, under the guise of combatting white supremacy. In other words, the Biden administration is coming for you. And it’s coming with attack helicopters—redeployed from Afghanistan—and guns.

This is what fascism looks like. Big lies, martial music, scare-‘em imagery, and the accusation that a corrupt elite is waging a secret war against the common folk and true patriots—including the 1/6 marauders and Fox viewers. This agitprop is even more dangerous than Carlson’s usual yapping. Anyone who buys his latest guff would certainly feel justified in resorting to violence. After all, if they’re hunting you, don’t you need to take extreme measures in response? (One prominent white supremacist now being sued for his role in organizing the deadly 2017 “Unite the Right” rally in Charlottesville, Virginia, has submitted court filings showing how he was encouraged by Carlson’s broadcasts.) As of Friday morning, this trailer had been viewed on Twitter at least 2.6 million times.

Carlson is not only playing with fire. He is attempting to detonate a bomb. Just as there is no bottom with Trump, there is no limit to the depths Fox will plunge to foment tribalism and terror. Carlson and the network are concocting a panic for profit and political gain. Leni Riefenstahl would be proud—and probably envious of the production values.

On Thursday, the Anti-Defamation League fired off a letter to Lachlan Murdoch, the CEO of the Fox Corporation, and blasted the upcoming Carlson show:

Let’s call this what it is: an abject, indisputable lie and a blatant attempt to rewrite history. As an organization committed to fighting antisemitism and all forms of hate, we remain deeply concerned that the false narrative and wild conspiracy theories presented by Carlson will sow further division and has the potential to animate violence.

Jonathan Greenblatt, the group’s CEO, blamed Carlson for having already triggered violent acts: “We have seen, over and over again, the consequences of such unhinged conspiratorial rhetoric—from Pittsburgh to Poway to El Paso. These heinous acts of violence were spurred, in part, by many of the same false grievances Carlson espouses each and every night.” And Greenblatt asked:

[W]here is the line for you and Fox? How many more people need to die or how many individuals must subscribe to groundless conspiracies before you say enough is enough? Inflammatory rhetoric of this sort is neither legitimate political discourse nor spirited debate. It is dangerous rhetoric that could catalyze violence.”

Greenblatt insisted that Fox and the Murdochs had a “moral responsibility” not to show this Carlson atrocity. Moral responsibility? That train left the station a long time ago for Lachlan and his father. In 2016, they decided that the best course for Fox was to become state television for Trump. Now they have steamed full speed into fascist territory. And everyone who works with Fox—every host, every reporter—is complicit. (I say this as someone who was on the Fox payroll in the late 1990s and early 2000s as a commentator.)

On Thursday, Rep. Liz Cheney (R-Wyo.) turned down a request to appear on Carlson’s show with a sharp reply from her spokesperson to Carlson’s top booker: “Tucker has had countless opportunities to explain to his viewers that the election was not stolen. Instead, he continues to promote dangerous conspiracies using the language that provoked violence against law enforcement and our Capitol on January 6. Liz will not participate in that.” This is the model for responsible Republicans. The problem: there are almost no responsible Republicans.

It’s unlikely the Greenblatt letter will persuade the Murdochs. They and Carlson long ago demonstrated they are beyond shaming. And Cheney’s boycott won’t move the network or its most-watched fomenter. But it is time to recognize that Fox has gone far beyond serving merely as a purveyor of right-wing and pro-Trump spin. With this new Carlson joint, Fox is fully embracing the hallmarks of fascism. Any reluctance to call it that only assists the fascists.