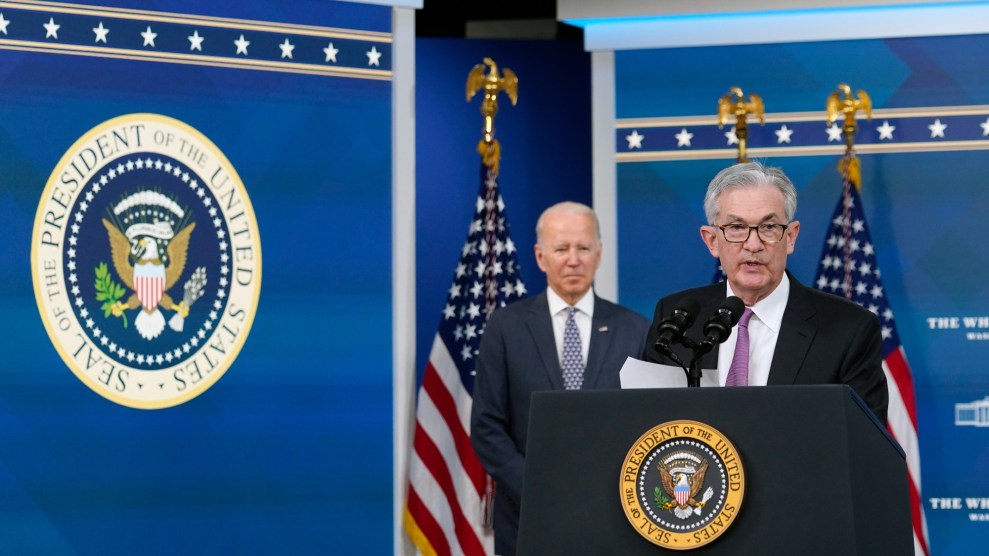 On Monday morning, President Joe Biden announced that he will renominate Jerome Powell to another four-year term as the head of the Federal Reserve, the central bank of the US and a key regulator of banks.

For months, Democrats have waged an internal battle over whether Biden should ditch Powell, Trump’s 2017 appointee, in favor of a nominee who would be more aggressive in wielding the Fed’s powers over Wall Street in service of action on climate change. Biden’s decision to nominate Powell despite these protestations sets up a renewed battle about whom the president will pick to fill the three remaining vacant seats on the Fed’s governing body, the Board of Governors—with progressives and advocates vowing to pressure Biden and the Fed to incorporate climate change into its regulation of Wall Street actors, given the major risks it poses to economic stability.

“We need a focus on climate action in all facets of the federal government, including the Federal Reserve,” Sen. Jeff Merkley (D-Ore.) wrote on Twitter after Biden’s announcement, vowing to vote against Powell’s nomination in the Senate because he “has already proven the [sic] he won’t answer calls for climate action.”

“Powell’s failures on regulation, climate, and ethics make the still-vacant position of Vice Chair of Supervision critically important,” wrote Sen. Elizabeth Warren (D-Mass.) in a statement. She also reiterated her opposition to Powell’s nomination, and promised to vote against him in Senate confirmation proceedings.

For months, progressive Democrats and advocacy groups have made the case that the Fed, which has a mandate to maintain economic stability, should work to mitigate climate risk, given that climate change’s impact—including extreme weather events—could destabilize the financial system. Powell has resisted this framing.

Progressives have made the case that the Fed should work to mitigate climate risk, given that climate change’s impact, including extreme weather, could destabilize the financial system.

These groups argue that the Federal Reserve should use this authority over Wall Street banks to impose rules that would make lending to companies that exacerbate climate change more expensive. There are a number of different ways the Fed could do this: creating pricey restrictions on banks that lend to companies exposed to fossil fuels or high emissions, or requiring banks to run resource-intensive stress tests to monitor whether their cash flows can withstand the sorts of natural disasters that are growing more common as the world warms.

Thus far under Powell’s watch, the Fed has stopped short of taking any such action, instead simply mentioning climate risks in several reports and speeches. In the last year, the bank did create a committee to study the financial risks posed by climate change. But thus far, no significant regulation has come out of their work.

In his announcement on Monday, Biden nominated Lael Brainard, who currently serves on the Fed’s Board of Governors, to be vice chair of the central bank—essentially Powell’s second in command. Brainard has spoken extensively about using the Fed’s regulatory powers over banks to take climate action. Her nomination to the post is almost certainly the result of encouragement by advocacy groups like the Sierra Club and progressives in Congress who had pushed the Biden administration to nominate Brainard as Powell’s replacement, in order to put climate action front and center of the Fed’s work.

But Brainard’s nomination to the deputy post, while promising, is not a guarantee: She’ll have a bigger platform with which to guide the Fed’s thinking on climate policy, but ultimately, she’ll hold little power to execute policy changes.

Several progressive groups issued statements on Monday pushing the administration to consider filling the three vacant seats on the Board of Governors—particularly the powerful vice chair of supervision—with avowed climate hawks.

“It is essential that President Biden nominate additional board members, including the Vice Chair of Supervision, that will act to address climate-related threats to our economy,” said the Sierra Club’s Ben Cushing in a statement.

In the meantime, Powell’s nomination is likely to sail through the Senate: Although some Democrats—Warren, Merkley, and Sen. Sheldon Whitehouse (D-R.I.)—plan to vote against him, many Republicans have praised Powell’s leadership of the Fed during the COVID-19 economic crisis, and want to see him remain at the bank’s helm.