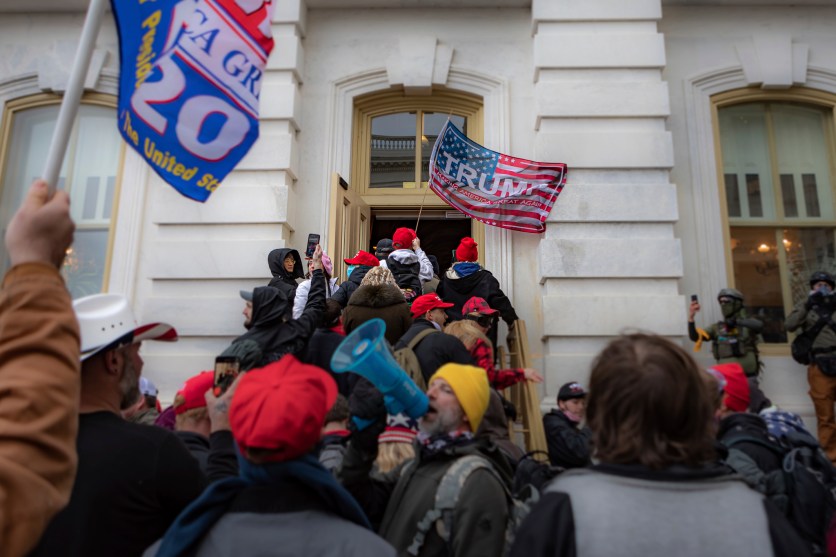 On January 6, 2021, pro-Trump rioters assault the US Capitol in an attempt to overturn the 2020 election of Joe Biden. Michael Nigro/AP

Editor’s note: This essay by David Corn first appeared in his new newsletter, Our Land. But we wanted to make sure as many readers as possible have a chance to see it. Our Land is written by David twice a week and provides behind-the-scenes stories about politics and media; his unvarnished take on the events of the day; film, books, television, and music recommendations; interactive audience features; and more. Subscribing costs just $5 a month—but right now you can sign up for a free 30-day trial of Our Land here.

A sense of self-preservation is essential for survival—for people and for societies. Yet this past year demonstrated that millions of Americans seem to lack this rational mechanism. Facing a serious threat to their health, they eschewed simple steps to protect their wellbeing. And facing a serious threat to democracy, they shrugged or, worse, bolstered that threat. That is, they chose actions—or inactions—that imperil themselves (and loved ones) and the nation overall. Let’s be blunt: They made stupid choices, forcing the rest of us to come to terms with the sad and troubling fact that we share this land with fellow citizens who don’t adhere to the basic rules that safeguard the country. And it’s all because of the continuing perversion of American politics by Trumpism, even with Donald Trump gone from the White House.

It is no coincidence that the set of Americans who have refused to be vaccinated against Covid-19 overlap with those who believe Trump’s Big Lie about the 2020 election and back his efforts to overturn the results and retain power. These folks do not see Trump’s attempted coup as a reason for banishment, and they do not clamor for an investigation of the violent attack on January 6 that aimed to subvert US democracy.

In each of these cases, resistance to reality is predicated on conspiracy theories, tribalistic politics, and unfounded paranoia. Anti-vaxxers and Stop the Stealers each rely on unproven, incorrect, and loony accusations: Bill Gates is planting tracking chips in the vaccines; Covid is no worse than the flu; an Italian satellite was used to flip votes from Trump to Joe Biden; massive fraud was committed by unnamed and nefarious Democrats. They refuse to heed public health authorities or voting experts (including Republican voting experts) who say, respectively, that the vaccines are safe and effective and that there is no evidence of significant fraud in the 2020 election. Their own biases and resentments overrule the facts and an entire political party—you know which one—fiercely encourages and exploits the hysteria and the disregard for truth.

Of course, being guided by fervor untethered to facts is nothing new for human beings. But the past year has shown how powerful, damaging, and deadly such irrationality can be—and not only on the specific matters at hand. How can we effectively discuss and debate the nation’s needs and problems, such as climate change, income inequality, health care, and education, if a large slice of the population cannot recognize reality? At issue here is not a difference over tax policy or abortion, but whether one plus one is two.

At issue here is not a difference over tax policy or abortion, but whether one plus one is two.

Opposition to vaccination is driven not by informed consideration of the risks and benefits of a jab but by animus, rage, and politics. As a Kaiser Family Foundation survey recently found, “Republicans and Republican leaning independents, who represent 41% of adults, now make up 60% of the adult unvaccinated population across the country and that political partisanship is a stronger predictor of whether someone is vaccinated than any demographic factor measured.” And an NPR investigation concluded, “Since May 2021, people living in counties that voted heavily for Donald Trump during the last presidential election have been nearly three times as likely to die from Covid-19 as those who live in areas that went for now-President Biden.” This political stance against vaccination and masks adopted by many Republicans and Trumpers as a holy litmus test is killing members of their own tribe. Yet these people would rather troll the liberals—under the banner “You’re not the boss of me”—than serve their own interests and that of their community.

They have followed the lead of Trump, Tucker Carlson, and other right-wing luminaries who have at times dismissed the Covid threat and conveyed conflicting (and dismissive) messages about masking and vaccination. Recently, when Trump held an event in Dallas as part of his national tour with disgraced ex-Fox host Bill O’Reilly, audience members booed when he revealed he had received a booster shot. (Trump had previously said he probably wouldn’t get the third shot.) The cultists have become more extreme than their leader. It’s hard to escape the conclusion that many resistors are being idiotic. (I have lost count of how many anti-vaccination Covid deniers, who tend to be right-wing extremists or fundamentalists, have died…of Covid.)

What do you do with people who embrace disinformation and lies—who are misled by political and religious leaders preaching a false gospel? Following the long tradition of American anti-intellectualism, the vaccine refuseniks don’t listen to Dr. Anthony Fauci and other scientists and policymakers. Instead, they demonize him and call for him to be prosecuted and imprisoned. This is a profound political problem without a clear political answer. These Americans are immune to the truth. They may believe they are combatting know-it-all elites in a battle for the American Way of Life, but they are just cannon fodder in a political cultural war, blindly following the proponents of lies and fear.

The same is true for the Stop the Stealers. They reside in a realm of unreason. Without evidence, they challenge and undermine the foundation of the American political system, placing it at risk. Nearly two-thirds of Republicans believe that the 2020 election count was not accurate. In June, about three of 10 Republicans said they believed Trump would be reinstated as president by the end of the year. A huge portion of the party has become QAnoners or gone independently bonkers. (Sorry guys, it doesn’t look like Trump will be ringing in the New Year at 1600 Pennsylvania Avenue, though there still are few days left for this nutty right-wing prophecy to come true.) On Fox, Carlson promotes the unfounded notion that January 6 was a “false flag” operation mounted by the Deep State to create a pretense for the Biden administration to wage war on conservatives. And people believe this fascistic crap.

There was a moment in the immediate aftermath of the January 6 attack—it lasted a few nanoseconds—when Republican leaders accepted reality. GOP Senate leader Mitch McConnell, during Trump’s second impeachment, blamed his party’s dear leader for the insurrectionist riot: “This was an intensifying crescendo of conspiracy theories orchestrated by an outgoing president who seemed determined to either overturn the voters’ decision or else torch our institutions on the way out. Former President Trump’s actions that preceded the riot were a disgraceful, disgraceful dereliction of duty.” GOP House leader Kevin McCarthy said the same: “The president bears responsibility for Wednesday’s attack on Congress by mob rioters.” Maybe 2021 was going to be not so bad…Yet when it became evident that the Republican base was sticking with Trump, despite his attempt to stomp democracy, they each essentially recanted. McConnell vowed he would “absolutely” support Trump should he run again in 2024, and McCarthy credited Trump for helping to stop the riot and recruited the former guy to raise campaign cash for House Republicans. They signaled there was no need to hold Trump accountable for an attack on the Constitution—which could well lead to further assaults. With a large majority of their party—including all those people who respond to email solicitations for donations—believing Trump’s nonsense, they bent the knee. They were with stupid.

Ignorance can kill. And ignorance and anger are a lethal combination. Particularly in politics. The pro-Trump anti-vaxxers have placed themselves in danger; the 1/6 deniers and Stop the Stealers have put the nation’s political system in jeopardy. The year 2021 delivered a tough message: the suspicion, hatred, and paranoia flamed by Trump and his crew remain potent forces that can propel millions to make bad decisions. It’s a clear warning for 2022 and the stupidity that lies ahead.