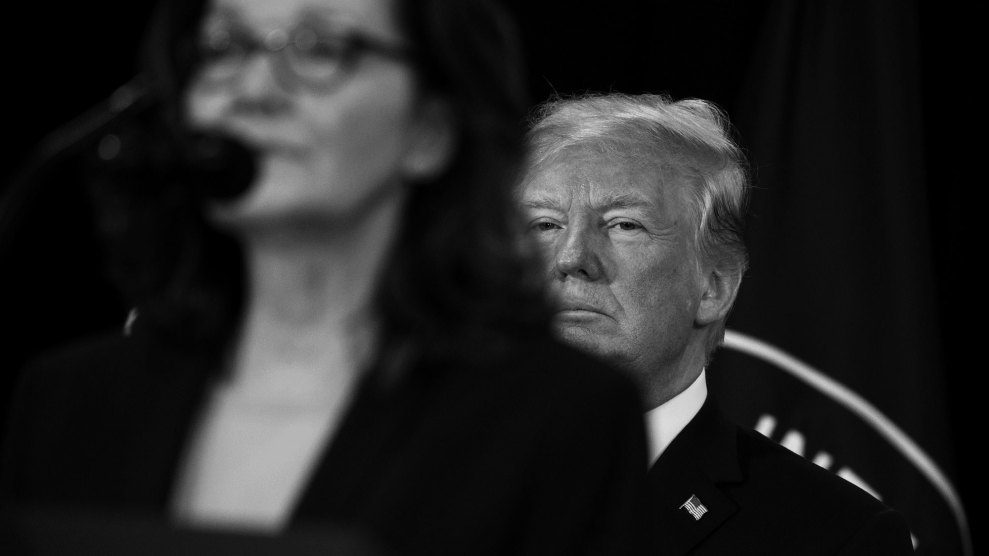 The CIA is too polite to say this directly, but it has issued a report that shows that Donald Trump, while obsessing over his efforts to overturn the 2020 election, abandoned one of his primary duties as president: to stay fully informed about potential threats to the nation.

This indictment comes from the agency’s Center for the Study of Intelligence, which produces scholarly papers and histories related to intelligence. Many (but not all) are publicly released, and they can be academic and a bit esoteric. There’s “How We Identified the Technical Problems of Early Soviet Nuclear Submarines,” “Scandinavians as Agents,” or “The Metals Traces Test.” But the CSI also generates work relevant to current intelligence issues—and that includes the question of what happens when a president doesn’t care about intelligence.

Days ago, the CSI released a revised edition of Getting to Know the President: Intelligence Briefings of Presidential Candidates and Presidents-Elect, 1952-2016. And what makes this edition new is that it includes a chapter on the 45th president that is titled, “Donald J. Trump—A Unique Challenge.”

The book is authored by John Helgerson, a veteran CIA intelligence officer who served as the agency’s inspector general in the George W. Bush administration. During those years, he investigated the CIA’s use of torture and wrote a classified report (released years later) criticizing the agency for these interrogation practices and noting the CIA might have violated international law. And now Helgerson, in a gentle way, is warning the public about a man who served in the White House and who might once again try to occupy the Oval Office.

Helgerson, one can tell, bends over backward to be fair to the former guy. He notes that during some intelligence briefings, Trump—as presidential candidate, president-elect, and president—listened attentively and was generally respectful toward the briefers dispatched by the intelligence community. But the bottom line is that Trump didn’t pay close attention to intelligence. This is no newsflash. After all, Trump once said that he was his own best foreign policy adviser “because I have a very good brain.”

In the first paragraph of the 37-page chapter, Helgerson notes that Trump, “by his own account, did not often read.” And that included the President’s Daily Brief, the report drawn up each day—with immense effort from the intelligence community—for the chief executive that summarizes need-to-know national security matters. For some presidents, the PDB is delivered each day with a briefing from an intelligence officer. Trump only wanted briefings about twice a week. It was less during the presidential transition.

Ted Gistaro, a career CIA analyst who was Trump’s primary briefer during the 2016 campaign, the transition, and the first years of the Trump presidency, told Helgerson that Trump did not pay much attention to the PDB: “He touched it. He doesn’t really read anything.” As Helgerson puts it, “Trump’s style was to listen to the key points, discuss them with some care, then lead the discussion to related issues and others further afield.” That sounds like a nice way of saying Trump couldn’t focus on the most important matters. James Clapper, who was director of national intelligence during the Trump transition, is quoted in the chapter recalling that Trump was prone to “fly off on tangents; there might be eight or nine minutes of real intelligence in an hour’s discussion.” He added, Trump “was ‘fact-free’—evidence doesn’t cut it with him.” The best way of reaching Trump was to show him maps, graphics, and satellite imagery—material that he found exciting.

During one briefing, Gistaro recalled, Trump asked him why there was information in the PDB that had not appeared in the media. Gistaro explained an obvious point to Trump: Sometimes obscure international developments that escape notice in the press can have significant implications for US security interests.

Without stating this explicitly, this new CIA publication indicates that Trump was highly uncurious about a highly sensitive matter: covert actions. These are the super-secret operations mounted by the CIA and other agencies that go far beyond intelligence collection. They could be paramilitary operations abroad, penetrations of terrorist groups, or sabotage of the cyber or nuclear facilities of an adversary. During the transition, “Trump received no briefings from CIA on covert action programs,” the chapter says. And he asked for none in the first weeks of his administration. (Vice President Mike Pence and soon-to-be-fired national security adviser Michael Flynn did receive such briefings.) This is rather odd. This activity tends to need presidential authorization, and it involves the most critical national security matters. Helgerson does not provide an explanation for Trump’s apparent lack of interest. And while the CIA prepared books with information on the several dozen world leaders that Trump would be talking to during the transition, it was “never clear exactly how much use Trump made of this information.”

Helgerson chronicles one of the most sensitive briefings presented to Trump. On January 6, 2017, two weeks before he took office, Trump was briefed by senior intelligence officers on the intelligence community’s assessment that Russia had attacked the 2016 election to help Trump. The intelligence, he writes, “was so solid that no one on the Trump team disputed the findings or conclusions of the report.” Much of the intelligence had come in via technical collection—covert eavesdropping and communications intercepts. Helgerson doesn’t point out that even though Trump seemed to accept the intelligence findings, he would for years afterward claim the Russia scandal was a hoax and even publicly state that he took Vladimir Putin at his word when the Russian leader told him Moscow had not intervened. (It was at the end of this particular briefing that then-FBI director James Comey informed Trump about the existence of the Steele dossier and its unconfirmed allegations that Trump had directly colluded with Russia and that the Kremlin possessed compromising material on him—which enraged Trump and caused him to believe the intelligence community was out to destroy him.)

The chapter says that in his first weeks in office, Trump took the PDB briefings—which he received two or three times a week—”seriously.” They lasted between 40 and 60 minutes. But according to Helgerson, Trump did not look at the PDB each day. He would just ask the briefer to fill him in on what he missed between the briefings. That means Trump would go for days without checking on the PDB material. Yet he monitored cable television news assiduously.

The PDBs were not long; at first, they usually contained three one-page items describing a new development overseas and brief updates on ongoing crises. Later in Trump’s presidency, items were allowed to extend to a second page. “The goal was to make the PDB shorter and tighter, with declarative sentences and no feature-length pieces,” Helgerson writes. In early 2017, Mother Jones reported that a memo was sent to intelligence analysts instructing them to keep material for the PDB short and free of nuance. By contrast, Obama voraciously read a longer PDB—typically including four articles each up to two pages and accompanying graphics, maps, video, and imagery—six days a week, using a computer tablet, and had a briefing most days. Once a week he was presented a longer article on a thematic or big-picture item. The chapter on Obama in Helgerson’s book is titled, “A Careful Reader.”

Beth Sanner, a top CIA analyst who replaced Gistaro as Trump’s briefer midway through Trump’s term, said that after about two years, the briefings settled into a pattern: two sessions a week, each about 45 minutes long. That’s not a lot of time for a president to be informed about the world and threats to the United States. The chapter states:

Gistaro had adopted the practice of providing the president with a one-page outline of the topics he would cover at the session along with a set of graphics. Sanner continued that practice and found that the twice-a-week schedule provided the time to script a briefing with graphics that anchored what Sanner called “story-telling” about the topics. Sanner noted that while Trump did not read the PDB, he read or had seen other things that he would bring into the conversation.

Story-telling? To keep Trump’s interest about the most pressing matters of the day, Sanner and her team had to come up with stories. They essentially had to trick the president into paying attention.

There’s nothing shocking in this report about Trump. But it does highlight his failings as president—and his brazen negligence of national security. According to this chapter, Sanner last briefed Trump before he headed to his private club in Palm Beach for the holidays on December 23, 2020. The briefings were to resume on January 6. But no more briefings occurred. Helgerson doesn’t dwell on this, but his book shows that for the last month of his presidency, Trump received no briefing from the intelligence community. That is—or should be—shocking. Presuming Trump stuck to his habit of not reading the PDB, he spent his final weeks in office, while falsely claiming the election had been stolen from him and plotting to thwart the Constitution, ignoring intelligence information and neglecting his obligation as commander in chief to remain up to speed on critical national security matters.

No doubt, Trump and his devotees will dismiss any derogatory information that emerges from the so-called Deep State. But Helgerson’s report is a harsh accusation based on first-hand accounts. It presents yet another example of Trump placing his own interests over those of the nation. And with Trump pondering a 2024 run for the White House, this chapter serves a fundamental purpose of intelligence: it provides a serious threat assessment.