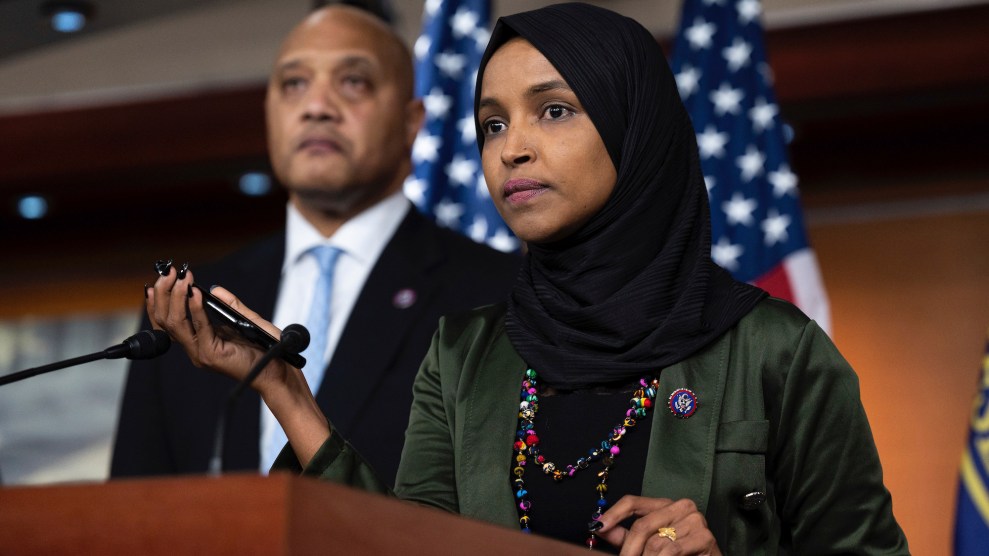 For 45 seconds, Rep. Ilhan Omar (D-Minn.) bit her lip, leveled her gaze, and held her cellphone steady before a pair of microphones as a hateful voicemail unfurled from its speaker. “We see you, Muslim sand nigger bitch,” a low voice mumbled, adding “piece of shit” and “jihadist” to his string of epithets. The caller predicted Omar “will not live much longer,” claiming “plenty” would “love the opportunity to take you off the face of the fucking Earth.”

The menacing message is one of the hundreds of threats that have been made on Omar’s life during her three years in Congress—threats that multiply in the wake of high-profile anti-Muslim attacks, such as the one launched by Rep. Lauren Boebert (R-Colo.). During an event in her district last week, Boebert falsely claimed she had once paused before getting into an elevator with Omar until verifying “she doesn’t have a backpack,” a thinly veiled insinuation that Omar could be carrying a bomb.

Omar shared the incendiary voicemail during a Capitol Hill press conference she held with Reps. André Carson (D-Ind.) and Rashida Tlaib (D-Mich.), Congress’ only other Muslim members, to call upon Republican House leadership to hold Boebert accountable for her actions. “To suggest I will blow up the Capitol—it is not just an attack on me, but on millions of American Muslims across this country,” Omar said. “It is time for the Republican party to finally do something—to confront anti-Muslim hatred in its ranks and hold those who perpetuate it accountable.”

Rep. Jamaal Bowman (D-N.Y.) stood to the right of the lectern in solidarity with his Muslim colleagues as they spoke and wrapped an arm around Omar when she left. Later that evening, he issued a statement demanding that the Colorado lawmaker be stripped of her committee assignments. The next day, fellow Squad member Rep. Cori Bush (D-Mo.) called for the same—as did the leaders of House Democrats’ influential identity caucuses.

Boebert tweeted an apology to “anyone in the Muslim community” on Monday and promised to reach out to speak with Omar directly. The exchange ended badly: Omar hung up on Boebert when, according to Omar, the Colorado lawmaker tried to “double down on her [anti-Muslim] rhetoric.” House Democratic leadership has not yet decided how to hold Boebert accountable for her actions. Rep. Hakeem Jeffries (D-N.Y.), the House’s fourth-ranking Democrat, promised reporters yesterday that they will take action to punish her, but didn’t specify how.

That’s because doing so comes with risks. Any punishment Democrats choose could easily backfire—either by providing more ammunition for future dangerous behavior or turning Boebert into a martyr, thereby strengthening her political position. “This is hard,” Pelosi told her caucus in a closed-door meeting Wednesday, Axios reported, “because these people are doing it for the publicity.”

Islamophobia has been a fixture of the American political landscape since 9/11 but has taken on fresh relevance in the House as right-wing lawmakers like Boebert and Rep. Marjorie Taylor Greene (R-Ga.) make anti-Muslim rhetoric a centerpiece of their nascent congressional tenures. And coping with this violent rhetoric is a problem that is showing no signs of fading.

In February, House Democrats ejected Greene from her committee assignments for online behavior suggesting the first-term Republican supported the execution of high-profile Democrats, such as Pelosi and former President Barack Obama. Democratic leadership took similar action against Rep. Paul Gosar (R-Ariz.) in November with a vote that both censured the Arizona lawmaker and stripped him of his committee assignments for posting a violent anime video that depicted him killing Rep. Alexandria Ocasio-Cortez (D-N.Y.). Rising to Gosar’s defense, Boebert delivered an unhinged diatribe on the House floor that deflected attention to Omar—whom she described as a member of the “Jihad Squad” and, among other falsehoods, accused the Minnesota lawmaker of being married to her brother.

“It seems like every week, we’re having to respond to a Republican member of Congress doing or saying something that’s, in my opinion, complete insanity.”

“It seems like every week,” Bowman told me, “we’re having to respond to a Republican member of Congress doing or saying something that’s, in my opinion, complete insanity.”

The last Republican to be punished for such inflammatory rhetoric was former Rep. Steve King (R-Iowa), who was removed from his committee assignments for his comments questioning the offensiveness of white supremacy in 2019. But, unlike the cases of Gosar and Greene, King had been disciplined by his own party. House minority leader Kevin McCarthy called King’s comments “definitely not American” and explained the punishment as “a very strong stance about that.” In contrast, this year, McCarthy has sat back and watched Democrats take the lead, framing the opposing party’s rebukes as an effort to silence conservatives. “There’s an old definition of abuse of power: rules for thee but not for me,” McCarthy repeatedly said in the wake of the vote.

“I think it’s ridiculous—it shouldn’t be on us to take care of it,” Rep. Pramila Jayapal (D-Wash.), chair of the Congressional Progressive Caucus, told me Wednesday. “The Republican leader should be the one who’s reprimanding his own caucus stripping her committee assignments.” But, if McCarthy is unwilling to act, “we might have to be the ones to do it.”

Without a public response from McCarthy, Democratic leadership has slow-walked any official retaliation in hopes of pressuring him to act. In a statement last week, Pelosi criticized House Republican leadership for its “repeated failure to condemn inflammatory and bigoted rhetoric.” But further condemnation at the hands of Democrats could actually embolden Republicans to continue—and perhaps even escalate—such conduct. The Speaker cautioned against any action that would “contribute to their fundraising” or draw further attention to “how obnoxious and disgusting they can be.”

Pelosi and her leadership team have discussed bringing forward a House resolution that condemns Islamophobia, an indirect rebuke of Boebert that may be less likely to produce the martyr status the right seeks. Such a move would follow the contours of a resolution Democrats brought to condemn “anti-Semitism, Islamophobia, racism and other forms of bigotry,” in the wake of Omar’s criticism of Israel in early 2019. She had questioned the influence of the pro-Israel lobby at a Congressional Progressive Caucus event in February 2019, comparing its influence to the fossil fuel industry and the National Rifle Association.

But Omar’s allies feel that Democrats should still seek a more severe punishment, such as removal from her congressional committees. “That language, that behavior can’t be normalized,” Bowman told reporters on Wednesday afternoon. “It literally leads to an increase in death threats for Congresswoman Omar. People are in jail right now as a result of credible death threats.” On Thursday afternoon, 38 members of the Congressional Progressive Caucus issued a statement in which they slam Boebert for “repeatedly weaponiz[ing] dangerous, anti-Muslim bigotry.” Anything short of strenuous disciplinary action, their statement said, “creates a dangerous work environment and furthers a climate of toxicity and intolerance.”

Democratic leadership has yet to publicly respond to that letter. Whatever action they ultimately take competes with a long to-do list Democrats have vowed to complete before year’s end—including raising the debt ceiling, funding the government, and passing Biden’s domestic agenda. But, as Omar said during her press conference on Monday, the action lawmakers take against Boebert could be a matter of life and death. As she noted, “We cannot pretend that this hate speech from leading politicians does not have real consequence.”