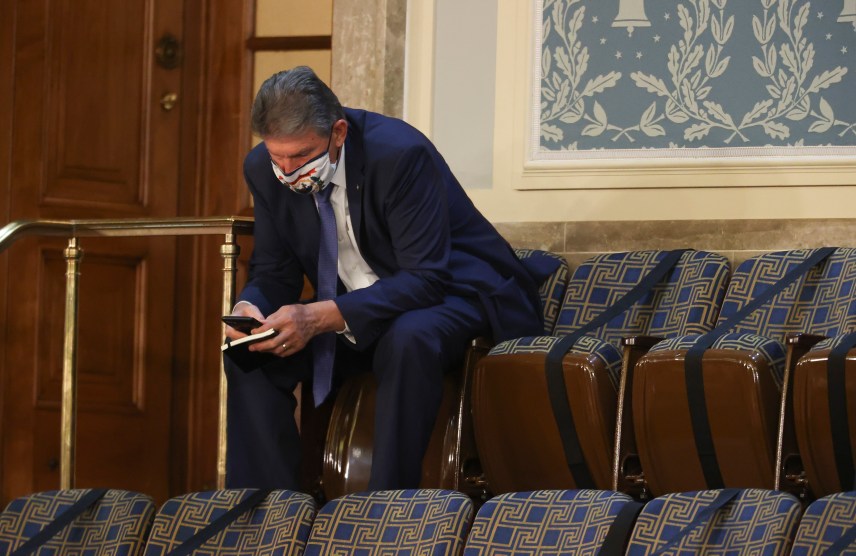 Lindsey Graham (R-S.C.), Joe Biden’s bitterest ex in the Senate, went on Hannity yesterday to crow that the Build Back Better bill was “dead forever,” and the sad thing is that he might be right.

Build Back Better is the legislative basket in which the Democrats placed all their choicest eggs, including provisions to fight climate change, expand the social safety net, and reform the tax system. During negotiations earlier this year, Sen. Joe Manchin (D-W.V.) used his vaunted perch as a moderate holdout to demand that the Democrats whittle down the package from $3.5 trillion to $1.75 trillion over 10 years. The Democrats did what he asked, but in a way that he doesn’t like. Instead of getting rid of the various programs crammed into the legislation, they rewrote the bill so that many of them expire after a shorter amount of time. Manchin finds all this temporary spending to be a duplicitous “budget gimmick,” since many Democrats have made no secret of the fact that they want these programs to be renewed, even though they probably won’t be if and when Republicans take back the legislative branch.

Instead, Manchin wants a bill with fewer but more permanent initiatives. His demand here isn’t unreasonable, but it would also require a drastic overhaul of the Biden domestic agenda, which, at this point, just feels cruel. Manchin has trained his sights on the expanded child tax credit, one of the most transformative provisions in Build Back Better, which could slash child poverty by 19 percent. The argument over the provision is pretty complicated, but the long and the short of it is that Manchin seems to want one of two things gone from the bill: the expanded child tax credit, or every other program in the legislation.

It’s no surprise, then, that one anonymous source told NBC that talks between Manchin and Biden are going “very poorly.” And without Manchin, the bill has no hope of passing. It seems almost certain that Senate Democrats will fail to achieve their 2021 resolution of passing the bill by year’s end. If this turns out to be true, Democrats will be voting on the bill in a midterm year, which could inflate the already heightened sense of urgency around the negotiations and change the risk calculus for various lawmakers backing the legislation.

With Biden’s social spending agenda at a standstill, the Democrats have signaled that they’re going to try to combat Republican voter suppression efforts by restoring the Voting Rights Act that the Supreme Court gutted in 2013. But this effort, too, is almost certain to be blocked by Manchin and his partner-in-crime, Sen. Kyrsten Sinema (D-Ariz.). The only way that voting rights legislation would have even the smallest chance of passing is if the Democrats find a way to get around the filibuster—either by abolishing it completely or establishing a temporary carve-out. And Sinema has been dropping hints Kim Kardashian style that she won’t support any moves to amend the filibuster to protect the right to vote. This, of course, would mean that the actions that GOP-run state legislatures have taken to curtail voting rights, gerrymander congressional districts, and lay the groundwork for an authoritarian power grab in 2024 will remain virtually unchallenged by Democrats on Capitol Hill.

If both the Build Back Better plan and voting rights legislation end up dead in the water, Democrats up for reelection will essentially have to spend 2022 campaigning on their only major legislative achievements so far: the Infrastructure Investment and Jobs Act, which passed in November, and the stimulus bill that passed in March. Some will have to do so in heavily gerrymandered and voter-suppressed districts. But the obvious flaw of staking a midterm campaign on an infrastructure package is that it takes a while to build things. People will likely not experience the benefits of the bill for months, maybe even years. Meanwhile, American families will see many tangible benefits—like the current expanded child tax credit—expire by 2022 unless the Build Back Better bill is passed. The Democrats will literally be in the position of having to sell their constituents bridges.