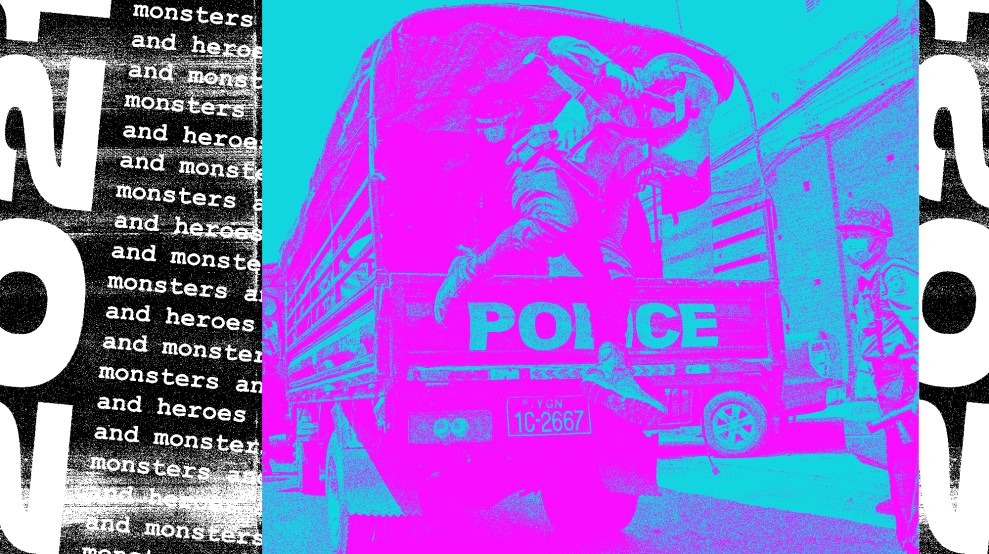 On February 1, families across Myanmar, already exhausted like the rest of us from a year of pandemic death and disaster, awoke to a whole new level of catastrophic hell that, even months later, is hard to comprehend.

In the early hours of morning, the Myanmar military launched a coup and arrested Nobel Peace Prize laureate Aung San Suu Kyi, whose National League for Democracy party had recently won democratic elections in a landslide. Army generals—who prior to 2011 ruled the country in successive dictatorships for half a century—justified the latest takeover with baseless claims that the election had been a sham, echoing Donald Trump’s false rhetoric about voter fraud in the United States. The army led by Senior Gen. Min Aung Hlaing soon shut down phone lines and people’s access to the internet, just like the old days under the former junta.

In the weeks after the coup, hundreds of thousands of people across Myanmar flooded the streets to protest, demanding the military step aside and allow Suu Kyi’s government to resume power. The generals responded as they always have—with violence. Security forces fired water cannons, rubber bullets, and live ammunition at peaceful demonstrators, brazenly gunning down people in the streets, including dozens of children. Headlines spread of unimaginable tragedy: a 13-year-old girl shot dead inside her home, and a five-year-old boy fighting for his life after taking a bullet in the head. The police killed six-year-old Kin Myo Chit while she was running toward her dad during a raid on their house.

After the coup, I began to hear from the Myanmar journalists I’d once worked with in Yangon, where I was based prior to coming to Mother Jones in 2014. “We are under the boot again,” my former boss wrote to me in an email. “No more safety for us. Preparing for the worst,” one of my other former colleagues wrote. “Pls pray for us,” she added before signing off. “Only God can help us.”

“Pls pray for us. Only God can help us.”

Around the world, Myanmar expats and diplomats watched in horror as protesters inside the country shared videos of the atrocities that they’d recorded with their cellphones. Some footage showed security forces beating people in the streets or dragging corpses along the ground. Other videos on TikTok had been uploaded by the soldiers themselves, seemingly taking pleasure in their brutality as they pointed their automatic rifles at the camera and danced. UN officials and human rights groups condemned the massacre as crimes against humanity.

But the bloodshed did not end. As of mid-December, Myanmar security forces had killed more than 1,300 unarmed people since the February coup, including at least 75 children, according to the Assistance Association for Political Prisoners, an activist group that maintains a widely cited tally. Killings and torture in July led to the recent discovery of mass graves. On December 6, the military succeeded in convicting Aung San Suu Kyi on spurious criminal charges like incitement and violating coronavirus restrictions, sentencing her to two years in prison. She will join thousands of other activists, politicians, and journalists who have been incarcerated by security forces.

And the violence only appears to be escalating. Earlier this month, after Myanmar troops suffered a bomb attack in the country’s northwest, they rounded up civilians, tied them up, and burned them alive. Four of the victims were 17 years old, one was a paraplegic, and at least one was 14, according to a list of the dead. “The sheer brutality, savagery, and cruelty of these acts shows a new depth of depravity,” a spokesperson for Myanmar’s underground National Unity Government, composed of National League for Democracy members and other pro-democracy politicians, told the Associated Press.

2021 is obviously not the first year that Myanmar’s army would deserve the title of monster. During the military’s half century of dictatorship, from 1962 to 2011, the generals and their minions regularly gunned down pro-democracy protesters and waged decades-long wars against ethnic minorities. Even after Suu Kyi’s party won national elections in 2015, the military retained control over some of the most powerful government agencies and launched a genocidal campaign against Rohingya Muslims. But the military’s brutality this year has wrought new levels of terror and complication because it unfolded in the middle of a pandemic, when much of the rest of the world was distracted by their own suffering. As the coronavirus spread in Myanmar, which gained access to vaccines at a much slower clip than the United States, the junta’s troops went out of their way to target doctors, some of whom had helped organize the protests. As Mother Jones‘ David Corn reported, security forces shot at hospitals and harassed medical personnel. All of which, whether intentionally or not, discouraged coronavirus patients and others requiring care from seeking treatment.

Along with medical workers, the military went after reporters. It banned major media organizations in early March, including Myanmar Now, the Democratic Voice of Burma, Mizzima, Khit Thit Media, and 7Day News, the biggest newspaper in the country. Soldiers broke into newsrooms and arrested dozens of journalists, including the American managing editor of Frontier Myanmar. That editor, Danny Fenster, was released in November after five-plus months in prison. But many Myanmar reporters have not been so lucky. Just this month, a photographer who documented a recent protest died in the military’s custody after regime soldiers arrested him in Yangon.

The Biden administration still hasn’t restricted the ability of a massive US company—Chevron—to profit off the Myanmar military and its brutality.

Despite these attacks, journalists in Myanmar have not quit covering the atrocities, and for that reason they are among my personal list of heroes for the year 2021. As the junta shut down major outlets, smaller community-based news forums sprang up—not only covering the protests in rural areas, but likely keeping people alive by informing them of military raids. Many of these citizen journalists lacked formal training when they started their work, and they covered the publishing costs out of their own pockets, digging into their life savings; some had to go into hiding because they were being hunted by security forces.

On December 10, the United States announced additional economic sanctions on the Myanmar military junta. But the Biden administration has fallen far short of what it could do to help the Myanmar people, because it still hasn’t restricted the ability of a massive US company—Chevron—to profit off the Myanmar military and its brutality. For many years, Chevron has worked with Myanmar’s state-owned energy company, raking in more than $100 million annually as a result. That energy company is the biggest source of funding by far for the military.

Since the coup, Chevron has sent a team of lobbyists to Washington, DC, to convince the State Department not to approve any sanctions that might disrupt its lucrative business in Myanmar. So if we at Mother Jones were to keep expanding our list of 2021’s monsters, those American oil execs would likely earn a spot, along with the international arms manufacturers that continue to sell weapons to the Myanmar junta even as the death toll climbs and climbs.