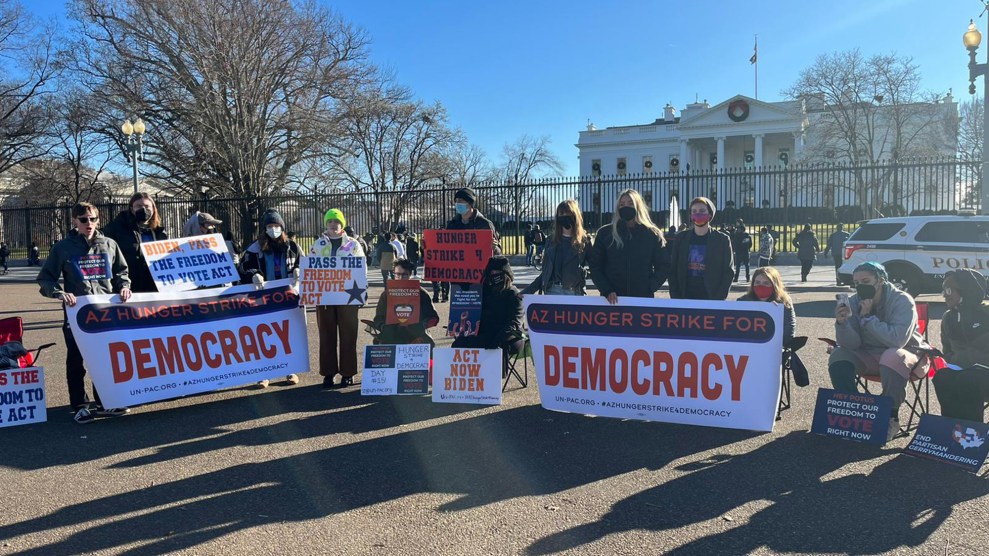 After months of knocking on doors and conferencing with senators to advance the cause of voting rights reform, a group of young people from Arizona decided that the only way to ensure the future health of our democracy was to stop eating.

On December 6, 20 members of Un-PAC, a nonpartisan advocacy group, launched a hunger strike outside the state capitol in Phoenix, Arizona, to encourage their senators—Democrat Kyrsten Sinema in particular—to support the Freedom to Vote Act.

The bill, an updated version of the For the People Act, would institute automatic and Election Day voter registration, make Election Day a federal holiday, and ban partisan gerrymandering, among other measures. It is a centerpiece of the Democratic agenda, but it has been stalled by Senate rules that effectively require a 60-vote supermajority to pass legislation. Both Sinema and Joe Manchin (W. Va.) have resisted efforts to change the body’s rules to allow legislation to pass by a simple majority.

“Our elected leaders were failing to act,” said Shana Gallagher, 27, co-founder and executive director of the group, “and we took decisive action when they wouldn’t.”

Since Un-PAC was founded in March 2021, its members have met with senators from both parties, but, Gallagher said, only Democrats have supported the legislation. That’s frustrating, she said, because even GOP voters in states like Arizona and West Virginia tend to support voting rights reform. “The strategy…is to just sabotage the efforts of the other party and further entrench the partisan divide in the United States Senate, which doesn’t exist for the actual American people when it comes to this issue,” she said.

On the fourth day of the strike, protesters secured a rare constituent meeting with Sinema. The reticent Democrat told activists that she would support the Freedom to Vote Act and the John Lewis Voting Rights Advancement Act, which would restore parts of the Voting Rights Act weakened by two Supreme Court rulings in 2013 and 2021. But she was less keen on reforming Senate rules to allow the bills to pass through simple majority votes.

The day after the activists met with Sinema, they flew to Washington, D.C., to bring their protest to the national stage. Joined by five additional strikers from other states—and by Lawrence Lessig, a  Harvard law professor who ran for president as a Democrat in 2016—they camped outside of the White House, holding signs reading “HUNGER STRIKE 4 DEMOCRACY” and “ACT NOW BIDEN.”

On Monday, day 15 of the strike, Senate Majority Leader Chuck Schumer announced that the Senate would take up voting rights legislation as early as the first week in January—and that he was willing to change Senate rules to get it done. Still, he’ll need the support of not only Sinema, but the notoriously stubborn Manchin, who just yesterday torpedoed Biden’s Build Back Better.

Even if the legislation doesn’t make it to Biden’s desk for a signature, un-PAC accomplished its goals of making voting rights reform a priority in Congress and of securing a meeting with the Biden administration. So, after more than two weeks without food for most, the protesters held a press conference declaring victory and calling off the strike.

Gallagher said that un-PAC will return to its strike if the Senate doesn’t implement rules reform and pass the Freedom to Vote Act within the first week of the new session. But for now, she’s breaking her fast with a celebratory açaí bowl.